Aquaria: Not everyone can be a drag queen but everyone should investigate drag 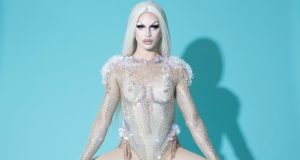 Aquaria: “Drag is all about self-expression.”

London continues to languish in an unbroken heatwave. The closely packed concrete feeds a slow, stupefying warmth into the air. Close your eyes, inhale the hot tarmac and you could be in Paris, Berlin, Barcelona – they’re all just indistinguishable skylines, blurring together in the summer haze.

That must be a little what Aquaria’s life is like – a series of hot, blurring cityscapes.

Like all Drag Race alumni, she’s on an endless world tour. Gay venues around the globe clamour to have their share of the growing pool of more than 100 queens from 10 seasons of the television programme, and it seems no sooner does one finish a show in any given city than the next is arriving to wow anew with a suitcase full of wigs and feathered costumes. In a real drag race, the 10th lap might be around the time momentum starts to diminish – but no force can stop the irresistibly rising star of RuPaul’s empire. In the drag world you don’t get tired – you just drink another Red Bull and get on the damn stage.

If Drag Race fever is the Beatlemania of 2018, Aquaria is its youngest, brightest frontwoman. She has just won season 10, she has a million Instagram followers, and she is 22 years old (born in 1996 – yes, you’re allowed to feel a bit faint). As I enter her hotel room in Charing Cross she is already in make-up, looking every bit as immaculate in real life as her Instagram would have you believe, a Facetune made flesh.

With her ultra-cool posse of Insta-famous friends hovering on the bed, she finishes laying a precise row of rhinestones across her cheekbone in the bathroom mirror. Drag Race turns most queens from nobodies into household names. But Aquaria was never a nobody – before she appeared on season 10, she was already touring Europe and dominating the New York drag scene. In what should have been her salad days she was already a self-made superstar.

“I mean, God forbid anyone be self-made and not have their success come from nepotism,” she drawls. “But no, I mean I’m very grateful for the popularity I was able to accumulate before the show. For me, it all just came from doing what I love and sharing that with the world. I worked with all these fabulous artists in New York and did all these wonderful shows, but, you know, not everyone is able to come to those shows, for whatever reason. So whatever I did, I wanted to share it online.”

Few Drag Race queens can independently harness the incredible celebrity she cultivated pre-show. But she’s part of a rising class of young creatives across the cultural spectrum who make their own names before looking to record labels, reality shows or other platforms.

In i-D’s recent “super youth” edition, Osman Ahmed described a revolution that’s uniting the creative youth of New York and London. According to Ahmed, young creatives in 2018 have a “polymathic sensibility” – they veer between artistic outlets, simultaneously running club nights, DJing, designing and illustrating – while economic pressures force them to bypass traditional sources of authority such as academic institutions. For these young creatives, the product they sell is not one endorsed skill set, but themselves, their very personas. It doesn’t matter what they do; it matters who they are. Thus, anyone can choose to be famous.

In the context of this transatlantic creative revolution, it feels deeply significant to be sitting with Aquaria at this moment. Being, as she is, a young New York star, self-made through fashion and make-up, about to host a London club night, few could epitomise the movement better. Now sitting cross-legged on her bed above her open suitcase, clutching the soles of her feet, she seems to understand precisely her place (and the place of drag) in this revolution.

“Drag is about whatever persona you put on to do a particular task. I could pick up trash in the morning and throw on my navy blue jumpsuit, and that would be that gig!” she gesticulates, her sentences littered with characteristic queer vernacular. “If I’m a fabulous dancer and dance is my thing, but all there is are spots open for stand-up comedians, well, bitch. . . I’m gonna have to find a way to mould myself to be a stand-up comedian!”

Driving this adaptability is an undercurrent of economic anxiety. “Growing up on the scene in New York, there are only so many spots for so many people. I needed to figure out how to fill those spots so I could pay my rent,” she concludes bluntly.

Is it any wonder millions of young people are flocking to Drag Race to seek realistic role models? Its core demographic is a generation which has been told it may never own property, and for which unpaid internships are now considered routine. Despite all the layers of make-up and highly produced conflicts in the show, there is a gritty reality to it that only the young can appreciate. Chi Chi DeVayne spoke frankly about filing for bankruptcy and making dresses out of garbage bags. Queens talk endlessly about sewing on the side to supplement the pittance paid by local gigs, and the hopes they have for post-show fame and fortune. What could be more relatable to an audience of millennials and Gen-Zers?

For millions of young people, the show offers an incarnation of the American Dream that’s within reach. The queens tour to even the smallest clubs (recently, even big names such as Chi Chi De Vayne and Alyssa Edwards have appeared in Chambers bar in Cork) and are so readily available for meet and greets you’d be hard pushed to find a young gay man who doesn’t have a selfie with one. Their attainability is a valuable currency in 2018.

“Drag isn’t a selective club,” Aquaria elucidates, pausing slightly between each sentence to weigh her words. “It’s something everyone can be welcomed to.” But if Drag Race represents a democratisation of celebrity, of power – then does it also represent a dilution of those things? Gay clubs post-Drag Race are thronged with young queens who taught themselves from YouTube tutorials. Does anything mean anything anymore, if anyone can become anything?

“Well. . . I don’t think everyone can actually be a drag queen,” Aquaria says, laughing, “but I think everyone should investigate drag.” She’s describing a distinction I don’t quite grasp.

“I think it’s something that a lot of people can take a lot of different lessons from,” she explains, still measuring each syllable before she utters it. “What’s more fun than fun? A lot of fun. Drag is all about self-expression, there’s so many different angles you can take on it. There are so many ideas, and I don’t have all of those ideas, so if someone else does, they should explore them”, Aquaria finishes. She’s happy to share the spotlight, it seems.

It’s surprising that a creative industry so marked by competition for resources can be defined by sentimental principles such as sharing and sisterhood. But much of the airtime on Drag Race has been dedicated to precisely that – queens open up about their traumas in front of the workroom mirrors while their sisters console them. Family, to young queer people, is something that can be chosen, and it is deeply important to a generation marked by the isolating connectivity of Instagram. The way the queens stay just within touching distance has bred an often toxic fandom defined by sometimes suffocating intensity. It’s a family that can be dysfunctional in its quest for belonging.

Perhaps that’s why Aquaria’s London appearance at Porn Idol went down as it did. After our interview finished, she took to the stage – but left it early, after being booed off for a minor faux pas. A flurry of defensive tweets follow. When she reappears for her second show later in the weekend, she apologises. The earnestness of Aquaria’s gushing is matched only by the hoarse yearning of the responsive crowd. Like a litter of puppies who’ve annoyed their mother, they’re just as eager to make up as she is. It’s a family squabble – sisters reuniting after a silly scrap.

As I gaze up at her panting out a breathless apology, I am struck by the burden on her young shoulders. Though barely an adult herself, she is the mother figure of a global family – the packed venue tonight is like an evening meal where we all sit down together. It’s hardly surprising that between dozens of sweaty flights and even sweatier meet and greets, Aquaria might snap across the dinner table at her rowdy offspring. But everyone will forgive her – because she’s their mother. It’s who she is.

It strikes me that Aquaria is right – everyone can investigate drag, but not everyone can be a drag queen. Not like her. The glow of celebrity that illuminates her features was hers before Drag Race, and it will be hers long after. Like all young creatives who matter these days, that glow is part of who she is, not what she does. It’s the faint light on the horizon of the reappearing sun – the dawning of the Age of Aquaria.