‘He didn’t take criticism well’: The human side of John Hume

‘In the Name of Peace: John Hume in America’ documents his tireless, transatlantic efforts

Former US president discusses his role in the Northern Ireland peace process as part of the RTÉ documentary "In the Name of Peace: John Hume in America". Video: RTÉ 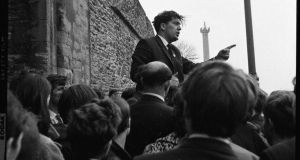 ‘He was the Irish conflict’s equivalent to Martin Luther King,’ says Bill Clinton

There is only one moment in Maurice Fitzpatrick’s involving documentary on John Hume’s tireless efforts for peace in Northern Ireland when the Social Democrat and Labour Party leader looks truly beleaguered.

It comes at a late stage during In the Name of Peace: John Hume in America (RTÉ One, Tuesday, 9.35pm) at the moment of what ought to be his greatest personal triumph: the news that, alongside the Ulster Unionist Party’s David Trimble, Hume was to receive the Nobel Peace Prize in 1998.

We’ve already seen him stoically approaching the barricades in Derry, in 1969, to demand civil rights. We’ve watched him enraged but entirely composed when confronting a supercilious British sergeant on Magilligan strand, in 1972, during the subdued protest that precipitated Bloody Sunday a week later. But in 1998, mobbed by microphones and cameras, he looks as though he’d rather be anywhere else.

“I see it not as an award for myself,” he says, “but as a very powerful international approval of the peace process in Northern Ireland.” His insistence sounds less like modesty than a caution. It’s taken three decades to get this far, his tone suggests, without making anyone the hero of the story. Don’t blow it now.

Fitzpatrick’s film respectfully disagrees, recognising the decades of endeavour and endurance behind the scenes that led up to such a moment, without being nearly so retreating about it. Just look at its long list of contributors, including Bill Clinton, Jimmy Carter, Tony Blair, John Major and, for some reason, Bono – a gallery of toastmasters.

“Born into a background of injustice and division, John Hume was a decisive leader of the civil right movement of 1968,” begins Liam Neeson’s weathered voice over, as though introducing a superhero. “He was the Irish conflict’s equivalent to Martin Luther King, ” smiles Clinton, as though minting the tag line.

Hume, though, was more discreet; so self-effacing, in fact, that at times he nearly slips free from the documentary. (You get very little on his personal life, for instance, past or present.)

For its theme, Fitzpatrick takes Hume’s fascination with US politics and his steady courting of American political influence to apply pressure on Downing Street and Dublin to better serve the interests of Northern Ireland. For its metaphor, less elegantly constructed, it takes overhead images of boats cleaving through choppy waters.

It’s fascinating how many American politicians Hume both impressed and outlasted: Ted Kennedy, Tip O’Neill, Jimmy Carter, Ronald Reagan. Fitzpatrick allows much detail on how such relationships were finessed, often rattling “the special relationship” between the US and the UK. “The Americans made me do it,” Margaret Thatcher reportedly said following the Anglo-Irish Agreement. Hume’s stealthy genius was to make them make her.

It is hard to document such resolve, patience and the subtle role of language in this story. Bono, to his credit, conveys it well when he describes, “how John Hume took down the emotional temperature of the Troubles, just enough so that reason could be heard.”

The rest is history. But history tends to overshadow the man, for the sake of a neater narrative. That may be why Fitzpatrick doesn’t elaborate on criticism of Hume, like the fascinating, frustrated words of his SDLP deputy, Seamus Mallon: “He didn’t take criticism well – in fact he wouldn’t take it at all. He always preferred to be alone.”

Mallon also affords Hume the highest praise (“I would put him in the same breath as Parnell, Daniel O’Connell.”) yet it’s the misgivings that complicate the portrait and so humanise him. The documentary would rather be a monument, full of tributes and celebration. Ill-health, we are told, prevented John Hume from contributing more fully to it. To see him deflecting even the glow of a Nobel Peace Prize, though, that always seemed his preferred tactic.

The Darkness Echoing: How the past is politicised and marketed
6

The Trial of the Chicago 7: Plodding and pedantic reading of the 1968 riots
8

On the Rocks: Bill Murray and Rashida Jones are perfect in Sofia Coppola’s latest film
9