Eclectic music has long been preserve of night-time radio, as have more outré talk shows 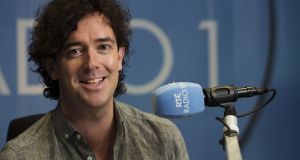 Late-night radio was a very different beast years ago. Listened to in secret and under the duvet, a whisper over just about audible, the message was potent: “you, with your weird music taste, are not alone. You are part of a tribe”. Dave Fanning presided over the airwaves for years, offering musical dispatches with an air of effortless authority (intoxicating stuff, if you’re listening from the deepest, darkest suburbs). Later, Cian O’Ciobhain on Radio Na Gaeltachta and the majestic Donal Dineen on Today FM carried on the good work.

It could probably be argued that late-night radio in 2018 isn’t the vital cultural lifeline it might have been in the 1980s or 1990s, but elements of the good old days remain nonetheless. Over on RTÉ Radio 1, Cathal Murray has the suitably sonorous delivery that’s perfect for Late Date (Monday-Sunday, from 11pm). It’s a show heavy on eclectic-ish playlists and perhaps less so on in-depth chat, but this week, Murray’s birthday tribute to Kate Bush (July 30th), ably proved his musical mettle.

Whether it’s by accident or design, Murray’s playlists tend to err on the side of conservatism (with elbowroom for the occasional curveball). Tuesday’s one, for instance, was packed with 10cc, The Rolling Stones, U2, Eric Clapton and other soft-rock stalwarts. Artists, not to put too fine a point on it, who have little to worry about when the radio royalty cheques arrive every year. It’s a shame, really, that Late Date doesn’t offer more of a platform for little known or emerging artists, or widen out to embrace all comers more fully, given the presenter’s evident musical passion and knowledge.

'Pantisocracy' strikes me as the sort of radio that, had it aired during late-night radio’s zenith, would have been utterly seismic

Over on Today FM, Paul McLoone (Today FM, weekdays, from 9pm) remains elder statesman in residence. Elder statesman status can often translate into complacency in the wrong hands, but McLoone, whose show has been a night-time fixture on the station since 2008, has spun experience into effortless energy.

On Yorkshire Day on August 1st (“who decides these things? I have no idea”), McLoone breezily dusted off a wide selection of northern artists with what appeared to be genuine zeal. In years past, McLoone’s musical template was criticised for being somewhat limited, but these days the show runs a satisfyingly wide gamut: Le Tigre, Ryley Walker, Gorillaz, John Grant and Godspeed You! Black Emperor all jostled on one particular evening’s playlist.

Alongside McLoone, the affable Dan Hegarty – The Alternative (weeknights, 2FM, 10am onwards) is probably the closest thing mainstream weeknight radio has to a champion of new music. On 2FM, the scope is arguably wider to break out more diverse offerings and in this respect, Hegarty often does not disappoint. Liars, Veruca Salt, Skepta, Talos, Tricky, Fiona Apple and Rue Royale all sit side-by-side of a single evening. This week, Blathnaid Treacy was a more than able stand-in for Hegarty; the effervescent yin to Hegarty’s more understated and measured yang. Treacy’s late-night delivery was upbeat and energetic to the point of caffeinated (“The Alternative To Sleep”, indeed), but with an eclectic playlist delivered with élan, she more than kept Hegarty’s seat warm.

Pantisocracy (2FM, Tuesday, 10pm) strikes me as the sort of radio that, had it aired during late-night radio’s zenith, would have been utterly seismic. And even today, Panti Bliss’s live-recorded show, billed as a “cabaret of conversations”, thrums with radical newness. Not for nothing have Panti Bliss’s monologues gone viral in the past, and here, recounting her early experiences of drag, Panti has hit upon a purple patch of personal confession and urgent, muscular lyricism.

This week’s show, The Young Are At The Gates, features a “shiny gathering of young things”. Among them; a Nigerian-born rapper, a bust-and-boom commentator, a non-binary Harry Potter fan, and an African-Irish gaelgeoir (“I have medications older than you,” remarks Panti at one point). Yet with Rory O’Neill’s insouciant alter-ago as mistress of ceremonies, the kids are alright, and steered well into some thought-provoking conversations about contemporary Ireland.

Nocturnal radio has long been the refuge of the listener who prefers their talk shows a little more outré than usual. The FM104 Phoneshow with Keith Ward & Cormac Moore (Monday-Thursday, FM104, 9pm onwards) combs through the most pressing, salient and contentious issues of the moment, ostensibly in a bid to “create a conversation”. On Monday night (July 30th), there had been glimmers of something interesting and meaty when Irish Sun crime editor Stephen Breen, and Noel Burke, the father of murdered Dubliner Mark Burke, both appeared to highlight the family’s ongoing fight for justice.

But on Tuesday (July 31st), the Phoneshow chat was flabby and directionless, veering perilously towards “aimless pub banter” territory. In what must be the most careworn conversation of the summer, Love Island was dissected for several more minute than were necessary, as was the value of the Irish presidency. “They’re all nice people, but it is worth €250,000 a year?” posits host Keith. “Definitely,” affirms Brian, a listener who has phoned in with strong (but alas, not strong enough) opinions. Needle use in hostels, and discussions of Fortnite and Mullingar make up the rest of the evening’s eclectic bill of fare.

Later in the show, foreign taxi drivers are raked over the coals; who better for the task than a Dublin-born taxi driver. “This is how these guys operate,” is intoned, I am sure, more than once. “They’re not real taxi drivers in my eyes.” And later: “They all seem to have their belts open and flies down.” No doubt the FM104 Phoneshow prides itself on offering a platform to earthy “real” Dubs who pride themselves on, to their minds, saying the unsayable and railing against the PC tide. For the rest of us though, it makes for supremely uncomfortable, unpleasant listening.

Radio Moment Of The Week: Abortion In The USA (BBC Radio 4, Tuesday, 8pm)

Given recent political comings and goings, the idea that abortion could be banned in the USA is a not-altogether unfeasible one. Here, Philippa Thomas travels to the heartland of Red Country – Kentucky and Texas – to prise apart the issue with locals. It’s a supremely well-delivered report: Thomas speaks to the women who are procuring abortions on their myriad reasons for doing so, as well as the do-gooders who set up shop on the footpaths outside clinics to persuade women to change their minds. In Louisville, Kentucky, the question is raised succinctly: what is the alternative in the mind of an anti-abortion activist? All the while, Thomas proves a knack for both balance and sensitivity.