Review: A high-school comedy set in 1996 gets the music right but changes the era’s tune 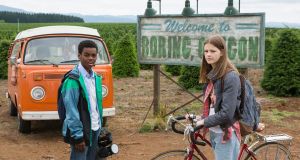 Everything Sucks! will be on Netflix from Friday

One of the single best jokes about the 1990s – a time so oblivious with prosperity it made it easy to wallow in despair – came in 1996, with a visual joke in The Simpsons. There, during Homer’s unlikely brush with the music industry, he investigated a music shop whose name evoked both the zeitgeist and a fickle pop culture: “Suicide Notes,” it read, “formerly Good Vibrations.”

Everything Sucks! (Netflix, from Friday) is a high school comedy drama set in 1996, in the town of Boring, Oregon. That location may sound unpromising, or a little too obvious for teenage concerns (in real life it is a municipality with the wit to have twinned itself with Dull, in Scotland).

But creators Ben York Jones and Michael Mohan have a nostalgic view of the time, closer to Good Vibrations than Suicide Notes, in which the geeks of the A/V Club and the freaks of the Drama Club are combatively territorial, but at the prospect of making a movie together, sooner or later, everyone changes their tune.

The uneasy question, though, is who is this show for? Contemporary teenagers may find the anticipatory delight of dial-up internet amusing (“Wait for it! Wait for it!”) and its more outré outfits, currently the subject of retro-fashion, oddly familiar. Those who came of age during the time should be charmed by a lovingly made pastiche of music videos, from Alanis Morissette to Nirvana, which the implausibly confident freshman hero Luke (Jahi Di’Allo Winston) makes to woo Kate (Peyton Kennedy).

With sweet awkwardness, they do go out, figuring things out together over the siren call of Tori Amos, thawing relations with otherwise unbearable drama divas, and the cracking of Luke’s heart.

But the handling of their journey is so consoling, so saccharine, that teenage angst seems to have been sanitised for more sensitive palates.

Delivered routinely from angst and, more ludicrously, swear words, it’s as though nobody here ever watched My So-Called Life. Such is the way with nostalgia though, now bringing the 90s under new management, shuttering Suicide Notes, and bringing back Good Vibrations.