Bliss, a comedy about bigamy that wants it both ways

Review: Stephen Mangan’s character used to be indecisive but now he’s not so sure 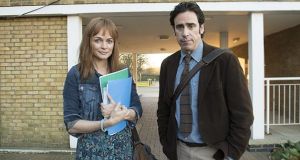 The sustaining joke behind Bliss (Sky One, Wednesday, 10pm), a new comedy that can’t decide how dark it wants to be, is that its protagonist, Andrew (Stephen Mangan), is chronically indecisive. “You can’t have them both,” says his wife, Kim (Heather Graham), demonstrating two possible models of kitchen tap as his home undergoes renovation. Oh, can’t he?

There could only have been one title for David Cross’s bigamy comedy, though. “Bliss”, which immediately suggests two couplings, such as “wedded” or “ignorance is”, is an otherwise elusive state for Andrew, whose frenzied secret double life is a source of constant worry and ceaseless improvisation.

Who would have thought that maintaining two different households for 15 years in one city, with a child by each women, could be so difficult?

In the opening episode, Cross invests some time in showing how Andrew manages it, bidding adieu to one family to spend a week abroad as a travel writer, then switching both his car and his sim card at the airport, to return to a near identical home and not dissimilar family in Bristol.

In one wickedly funny joke, Andrew seems to conduct his travel writing by using Google Street View and plagiarising liberally from Trip Advisor, seeing the world without leaving the house. “First of all, I never planned for any of this to happen,” Andrew tells us in voiceover. “It just happened and it kept on happening.”

It is much easier to frame a comedy around an apologetic bigamist than an abusive, lying sociopath. So, when we see Mangan breaking into a private sob early on, over the hazy sounds of the Beach Boys’ Wouldn’t it Be Nice, we are meant to take him for a conflicted man, in way over his head.

In that, Mangan is well cast; a boyishly attractive comic actor whose wide smile, perfect teeth and leaping facial expressions makes him seem no more sinister than an Aardman clay animation character come to life. That means that Cross, who also directs, can conceal the sheer malice of the premise – but only for so long.

In the first episode Andrew finds himself on a reluctant dinner date with Jo Hartley’s warm Denise (easy-going and intimate as his common-law wife), alarmed to discover that his actual wife, Heather Graham’s neurotic Kim (barely drawn and pallidly performed) will soon arrive to the same restaurant.

His predicament revolves around an attempt to dissuade Kim from her plans while trying to sabotage his night out with Denise. How desperate will he get?

“Your dad may be a lot of things, but he’s not a racist,” we hear early in the show, absolving Andrew for some light, unfunny Little England humour involving Eastern European builders and Spanish Chorizo festivals – lazy stereotypes for such a worldly guy.

But if Andrew is not racist, he seems suspiciously well practised at it. “I’m sweating like a suicide bomber going through customs,” he tells their Muslim dinner companion, adding, “No offence.”

We know it’s a ploy designed to terminate the evening, conducted with the implausible deniability of a playground bully (“I’m not calling you a towelhead”). But you wonder why Cross, the Arrested Development actor who was publicly accused recently of making similarly crude racist jokes in his private life, chooses to pursue them at such length.

Is Andrew some kind of malevolent id, an otherwise nice guy who, under pressure, must do and say such intolerable things?

Later episodes are mercifully short of racism as either gag or tactic, but Andrew’s actions grow more manipulative and cruel throughout the series, while he himself never suffers quite enough. Long before the series does, you wonder what anyone sees in him. Denise, Kim and finally the audience deserve better.

Amybeth McNulty: the Donegal teenager who stars in ‘Anne with an E’
6