The male is always presented as someone who, if left unattended, would starve or catch fire 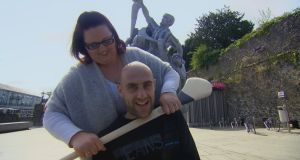 Don’t Tell the Bride: Jennifer and Robbie visions for their big day were never going to match up. Photograph: RTE

Don’t Tell the Bride (Monday, RTÉ2) came back this week just in time for, aptly, Valentine’s Day and, even more aptly, Lent. I’m surprised, to be honest, that the format still works and we’ve not moved on to more worldly sequels with names such as Well That’s The Bride Well and Truly Told or Please Tell the Relationship Counsellor or Upsetting Divorce. As it turns out there is a never-ending stream of hopeful brides and gormless grooms happy to stoke the fires of our schadenfreude in return for frocks.

The whole show is premised on the notion that women want a posh ball at Versailles while men would prefer a hoolie down the dump, and that making the latter the wedding planner is like saying, “Wait, what if we let that Labrador pilot the plane?” (NB: I own the rights to this format).

The male in this partnership is always presented as someone who, if left unattended, would starve to death or go on fire. This week, for example, affable hurley-wielding Robbie is revealed as the type of person who has never even bought his own socks. In interviews, his family and friends express the usual amazement that he can walk on his hind legs and has survived until adulthood (I’m exaggerating). This is just convention, however, and even if Robbie was an intensely capable individual, I’m sure an off-camera researcher would butt in with: “Say he’s an eejit.”

In contrast, the bride always waxes lyrical about the wedding she has dreamed of since she was a little girl. And so Robbie’s bride-to-be, Jennifer, says she wants to feel like “a princess”, which I take to mean she hopes to eventually wield monarchic power and execute dissidents. And people say the young have no ambition.

These introductions are all about building up expectations. This television wedding needs to be perpetually on the brink of disaster or there is nothing to not tell the bride about. Call me cynical, but sometimes I think the producer wants things to wrong, that they dream of a day when they can conclude a show with a plummeting, clown-packed dirigible, a close-up of a groom saying “Oh oh spaghettios!” and the words, “There were no survivors” flashing on the screen. “My masterpiece,” the producer will whisper as the cops take him away.

The programme makers must also hire a special breed of camerafolk who are excellent at keeping a straight face. They never break the fourth wall by shouting things like, “Of course she won’t want a He-Man themed wedding, you gom!” or “Are you sure you want to give the children real crossbows?”, like the rest of us do five times per episode.

Without such insights, Robbie is enabled in his folly by his father and his best friend, who acknowledges that his wishes are “f**king mad” but also have a whole “let’s see what happens” attitude that really suits reality television. Still, Robbie’s isn’t the most terrible idea I’ve seen on this programme: he just wants to have a Christmas-themed wedding in August at a busy town crossroads. What woman wouldn’t want that?

At the outset of each episode, the couple are separated and the bridegroom moves in with his mother for three weeks or, possibly, forever. This allows us to have a parallel stream of footage in which the bride dreamily visits palaces and frock shops before cutting back to the bridegroom scouting out a cursed burial ground or buying clothes off a tramp.

This is, as usual, played for maximum irony, with Jennifer visiting a fancy country house while Robbie and his chums do reconnaissance around an old barn. Then we see Jennifer fretting in a dress shop before we cut to Robbie having fun saying the word “boobs” before haggling with the dress-monger. He stops short of spitting on his palm before shaking hands.

Sweet and in love

But ultimately Don’t Tell the Bride is a warm, hopeful show. Jennifer isn’t really a bridezilla. Robbie isn’t really an eejit. They’re sweet and in love. The reason he’s chosen a Christmas theme is because every year Jennifer forgoes a family Christmas at home to travel to England to spend time with Robbie’s son Riley. Yes, Jennifer is slightly appalled by the reindeers hired to pull her nuptial sleigh and bemused by the elf costumes the bridesmaids have to wear, but she’s touched by the underlying sentiments. Furthermore, local government red tape means they can’t get married at a busy town intersection (municipal bureaucracy clearly has a sense of romance) so at the last-minute Robbie finds an outdoor amphitheatre.

“It’s the most beautiful [wedding] I’ve ever been to,” concludes a bridesmaid dressed as an elf.

“It has to have been,” says another bridesmaid dressed as an elf. She is wise beyond her years.

So Robbie isn’t headed towards Heartbreak Hotel (Wednesday, TV3) just yet. On this programme, Maia Dunphy gathers four tearful people at the eponymous inn of woe to work on their heart health. She doesn’t make them eat margarine and do gentle exercise; instead, with the collusion of a counsellor named Sara Davison, she makes them keep video diaries, puts one of their faces on a huge public billboard and has another flung out of a plane (I don’t have space for all the context). Dunphy’s methods may be unconventional but she gets results. At the end of the episode all feel less heartbroken, although one of them is dead. Only joking, she was wearing a parachute.

My observations? Maia Dunphy is a very likeable presenter, some of the advice here is good even if the character-building stunts are a bit silly and I think video diaries might be a bit overdone…

Except when you give the cameras to animals! Gordon Buchanan’s Animals with Cameras (Thursday, BBC2) might be another BBC cost-saving scheme akin to robots with radio shows and “paying women less”, but it certainly answers the age-old question “what if we gave cameras to animals?” If this week’s episode is anything to go by, you’d get fascinating insights into the reproductive behaviour of devil rays, footage of predatory Spanish wolves and some tastefully-filmed bear love.

It wasn’t the worst-shot footage I’ve seen on national television. Yes, the ursine cinematographer’s framing was off, but I thought the slinky music he added to his courtship of the female bear was very clever. Okay, I’ve just been informed that Buchanan probably added that soundtrack himself, but the point stands: Gordon Buchanan is great, the extension of the surveillance society into the animal kingdom is overdue and also, for the record, I like fluffy animals best.