‘Homeland’ returns: who will provide the craziness now?

As season seven begins, Carrie is back willfully endangering the people in her life 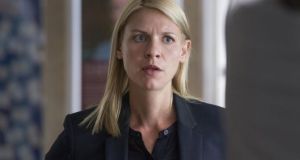 Someone has to be crazy on Homeland. The Showtime series, which begins its seventh season on Thursday on RTE Two, has always remained true to the central tension of the classic conspiracy thriller: you are paranoid, and they’re out to get you.

This was the defining principle of the show’s heroine, the CIA officer (now former officer) Carrie Mathison, played on the razor’s edge of instability by Claire Danes. As portrayed by the show, Carrie’s bipolar disorder was a necessary component of her almost comically exaggerated effectiveness as a spy. Skill alone wasn’t enough — she needed the energy supplied by her natural intensity and her manic self-righteousness.

This portrait, and particularly the notion that with medication the effects of Carrie’s disorder could be turned on and off like a light switch, drew some understandable backlash in the show’s early seasons.

That plot twist aside, though, the show put bipolar disorder mostly on the back burner in seasons five and six, keeping Carrie on her meds and painting her as more fretful and anguished than erratic. It didn’t abandon the idea of the truly tortured protagonist, though.

Instead it elevated a supporting character, the CIA killer Peter Quinn (Rupert Friend), to co-starring status — he, rather than Carrie, essentially solved the mystery in season six — while saddling him with a monstrously debilitating set of post-traumatic mental and physical afflictions. It was the same Homeland formula with a different character, while Carrie slid into the role of concerned helpmate usually occupied by her CIA mentor, Saul Berenson (Mandy Patinkin).

Which brings us to season seven, which opens in the aftermath of Peter Quinn’s heroic death. With Quinn gone, where will the show go to find the crazy? Will Carrie’s mania re-emerge as a primary driver of the plot?

Showtime made only the season premiere available for review, so we can only guess. But the early indications are that the show is going to try to have it both ways — to keep Carrie medicated, while putting her in a situation so dire that her behavior still unnerves those around her. (There will, however, be changes in how she obtains her drugs, and which ones she takes, according to an interview with Danes.)

This echoes her current conflicted situation. Having prevented the assassination of the winning presidential candidate Elizabeth Keane (Elizabeth Marvel) by right-wing radicals in season six, only to be blindsided when Keane trampled on civil rights by ordering mass arrests (including that of Saul), Carrie is now secretly working to expose Keane’s lies.

Fans will be happy that this involves the resurfacing of Carrie’s spycraft, and it’s a pleasure in the season premiere to watch her pulling her gear out of hiding, or duck into a hotel room and put on a disguise — it’s like she’s getting back into her own skin.

On the downside, it also means that she’s back to willfully endangering the people in her life, a trait that could be seen as a complexity of character but has always registered as an unpleasant distraction. Once again it’s up to Carrie’s sister, Maggie (Amy Hargreaves, in one of television’s more thankless roles), to angrily lecture her. “There’s a vast government conspiracy and you’re the only one who can bring it to light, I know,” Maggie says.

“I’m on my meds,” Carrie wails in response to her sister’s accusations. She’s doing what she’s doing — including putting her young niece at risk as part of her investigations — because the country is in free-fall, she says. And there’s a poignancy to her plea that accords with the current mood of much of that country, an inchoate sense that events you can’t control call for some sort of radical action.

The implicit promise of Homeland is that over the course of 12 weeks Carrie will indeed bring the vast government conspiracy to light, and restore justice and order to boot. It remains to be seen how crazy a task it will be. – NYT