Patrick Freyne: It is now late-period Dermot Bannon. He is on the verge of losing it

Room To Improve star Dermot Bannon got a nasty surprise when he was told that the refurbishment budget for his own house would have to be doubled to approximately €600,000. Video: RTÉ 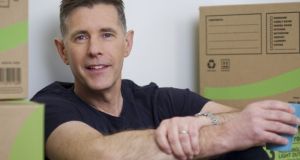 Dermot Bannon is my muse. I would write about him in every column if I could (God knows I try). If I were the arts editor I would make the arts pages of this paper entirely Dermot Bannon-themed. If I were taoiseach, I would declare a Dermot Bannon day and commemorate his works instead of the Black and Tans or Fred West or whoever he’s commemorating this week.

On every episode of Room to Improve, Dermot Bannon goes into battle with the plain people of Ireland in the cause of justice and light. Mainly light, to be honest. In his philosophy, there’s nothing that can’t be fixed by turning a wall into a window. He’d build all of his houses from windows if he could. The man is a martyr to big windows.

And this is Room to Improve’s great legacy. There may have been no sex in Ireland before the Late Late Show but you couldn’t watch your neighbours doing it before Room to Improve. In a sense he is creating a metaphorical window into the heart of the Irish people, who are for the most part entirely unco-operative, ungrateful and obsessed with dark holes fronted by classical pillars and filled with Ikea furniture and sacred heart pictures of Marty Morrissey.

Is it any wonder the man is a bit stressed? He’s been showing the strain for a while now. It’s my impression that we are now at late-period Dermot Bannon/capitalism in which the centre cannot hold and he is on the verge of losing it. The bits of the show in which he mutters to himself while driving his car are getting longer and the bits where people disagree about what colour something is are getting more fraught and there has been a definite increase in rebellious couples who buy foreign design magazines and have no qualms about contradicting a man from Dublin – gone are the days when we say: “Hush child, a man from Dublin is speaking.”

We are still, of course, intrigued by the premise. What sort of Xanadu will Bannon build for himself? What sort of Lovecraftian horror will come to be when he is untethered by conventional thought and unrestrained by reason? Well, it’s off to a good start. It starts with him crying as he plans to leave his old home, which he allegedly shares with his wife and children. These entities are conspicuously absent. Bannon insists that his wife is real and happy for him to make all the makeover decisions. I instantly declare her the best off-screen fictional character since “her indoors” on Minder. Then Bannon becomes quite moved when removing some of his children’s drawings from the kitchen. “I bet he did them himself,” says my own wife, who is, unlike Bannon’s family, definitely real.

Bannon calls in his trusty quantity surveyor Patricia. When she appears I hear myself exclaim “Patricia!” like she’s Norm from Cheers. Ireland is the only country with a celebrity quantity surveyor. Patricia has no time for any of Dermot’s nonsense, which is why we like her. He wants to double the size of his new house for just €350,000. The nation scoffs at this even before Patricia has a chance to say: “Not a hope.” In fact, we all say it along with her, panto style.

Soon there’s a digger on site and everyone is wearing hi-vis vests and hard hats, as is tradition. The average episode of Room to Improve derives plot and drama from the conflict between Bannon and his clients. His new client, “Dermot Bannon”, does not disappoint. While Dermot Bannon is eager to progress the project he is hindered at every step by Dermot Bannon, who refuses to finish his plans and sends designers the wrong photos and quibbles with every little decision that Dermot Bannon has made.

At the dramatic high point of the show, both Dermot Bannons meet award-winning architect Niall McLaughlin, who suggests that covering a building in big windows may not actually make sense in a northern, light-rationed country such as Ireland. “Large sheets of glass can be quite forbidding,” he says.

This triggers a sort of nervous collapse in Bannon, who has spent his lifetime and 13 series covering other people’s houses in big windows.

“In Ireland, a lot of the time you spend in your house is in the dark,” says Bannon, somehow realising this for the first time.

“In the dark, a glass wall can become quite frightening,” he says. “At nighttime it can become something very horrific.”

A nation, half of whom, thanks to Bannon’s big windows, have been driven demented by sunlight during the day and their own despairing reflections at night, begin throwing things at the screen and rending their garments.

This truly is Bannon’s dark night of the soul, in this instance a dark night in which you can see your haggard face reflected by big windows. “Who am I?” Bannon seems to whisper at his reflection.

Luckily, this period of doubt doesn’t last. Bannon meets a lighting designer/Pixar character improbably called Rocky Wall, who shows him that he just needs to illuminate his garden. So Bannon decides that the problem is not his love of big windows but the existence of night itself and he vows to banish it by lighting up his shrubbery like an off-season Christmas tree.

Before long a huge pane of glass is being lifted by a crane into the back garden of Dermot Bannon’s house as he stands watching with a big smile. “I’ve put windows in again and again but never this big,” he says proudly.

It is nice to see him happy, but it won’t last long. Diarmuid Gavin, aka the Dermot Bannon of shrubs, arrives and they wander around the overgrown garden for a while. This bodes well for future conflict. Gavin is the anti-Bannon (the sky is his big window) and he has surely been biding his time for millennia waiting to destroy his prey. Then we get some preview footage of the next episode. A lot is happening here, but I’m pretty sure there’s wailing, teeth-gnashing and some footage of Dermot Bannon crying in the bath (I may have imagined that). I, for one, will definitely be watching.