Dancing with the Stars: Sinead O’Carroll gives a b*witching performance 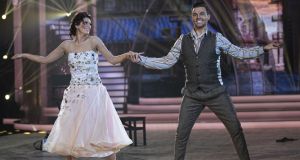 Ladies’ night is upon us on Dancing with the Stars. First, however, a public service announcement: having torn a calf muscle in rehearsals, pirouetting pugilist Michael Carruth is seeing out the men’s group performance.

So no feet of fury from Carruth. The closest we will instead come to frantic intensity is the expression Nicky Byrne throws when Jennifer Zamparelli declines to laugh at one of his jokes (she’s chuckling on the inside Nicky – or possibly questioning the meaning of existence).

But, anyway, the ladies. First up is Glenda Gilson. She’s a former host of Xposé and, uniquely among this year’s glitter-garlanded hopefuls, has been upfront about her nerves. Is it mean-spirited shoving her on first?

She’s also up against it in dancing a challenging cha cha cha, with Robert Rowinski, to Dua Lipa’s Don’t Start Now. Rowinski has every faith in her, believing her “really long arms” means she is the perfect partner.

Gilson is visibly self-conscious as the music strikes up. It surely doesn’t help her concentration that Rowinski is dressed as a security guard with suggestive rhinestone epaulettes. But her steely grin is reflected in a robust twirl. And she pulls an impressive – and surprising! – back flip. This is especially brave as, in the event of over-shooting, there’s a decent chance she might impale herself on Nicky Byrne’s quiff.

“It was certainly better than I expected it to be,” says judge Brian Redmond. In her post-performance debrief with Byrne, Gilson meanwhile reveals that she and Rowinski had considered adopting the portmanteau “Glen-Ro”, in reference to the grim rural soap from the 1980s. It didn’t stick – but Gilson may be around longer that she had expected. She scores 17 out of 30.

Next to the floor is 2018 Miss Universe participant Gráinne Gallanagh, with pro partner Kai Widdrington. Accompanied by the triple threat of Ariana Grande, Nicki Minaj and Jessie J’s Bang Bang, she delivers a tango. But can the sister blister?

“If this was Walking with the Stars,” I’d be fine, she says, post-stomp. “I love all the steps you put in,” says judge Loraine Barry, who praises the execution of the “skater’s walk”. Gallanagh’s reward is a score of 18. As a bonus, 41-year-old man-band singer Byrne treats us to a paparazzi pic of the Donegal model with spray-on tan. RTÉ, you are hilarious.

The obligatory veteran pop star box is ticked by B*witched’s Sinead O’Carroll. She pulls off an American Smooth with Ryan McShane to Steve Lawrence’s Bewitched.

“Maybe it’s a bit early to say but I think there’s a star in the making,” swoons judge Loraine Barry, praising O’Carroll’s “little shoulder shrug”.”It was really beautiful,” she adds. O’Carroll roars home with a score of 21. We have an early favourite.

With Love Island shortly to start on another channel, there is a timely turn by former snog city homesteader Yewande Biala, with new pro stomper Stephen Vincent. They put together a salsa to the strains of Solo Dance by Martin Jensen. Speaking of strains, Biala hurt her ribs during rehearsals and so simply by being here has gone above and beyond.

“I’m out of breath but just so happy,” says Yewande, which is also what I will be shouting – potentially out the front window, at strangers walking past – when I’ve finished this review.

“You brought all that Love Island summer salsa,” says judge Julian Benson who likens her to a “Bond girl” and praises the lifts (I was at RTÉ once and the lifts were definitely the most impressive thing about the place).

“We will have noticed you grimacing in pain at the end of that,” adds Nicky Byrne. He is referring to Biala’s dancing rather than Westlife’s last tour. She scores 16.

The evening closes with an RTÉ double-whammy. First Mary Kennedy does a Foxtrot to No Frontiers by Mary Black. Her “timeless elegance” is kindly received by Julian Benson, who is dressed like a time-travelling matador from Alejandro Jodorowsky,’s Dune. Brian Redmond is less effusive, saying she was flat “from beginning to end” (or was he commenting on Jennifer Zamparelli’s hair?). She scores 13.

And the curtain is finally brought down by 2FM DJ Lottie Ryan. She jives her why through Nicole Scherzinger’s Whole Lotta Shakin’ Goin’ On. She is accompanied by Pasquale La Rocca, who has made his way to Bray fresh from winning Dancing with the Stars Belgium.

“That was a start beyond anything I’ve seen. Lottie you little legend.” says Brian Redmond. Her score of 20 sees her place second on the night.

Michael Carruth, meanwhile, may not have been too devastated to miss out on the blokes’ group performance. It is soundtracked by the Village People and In The Navy and, as per the title, everyone is slightly at sea.

The sinking feeling will continue next week as eliminations begin. Who’s for the hop and who the chop? If you can contain yourself, all will be revealed seven days hence.