Patrick Freyne: The mystery of Dermot Bannon and his many surrogate wives

Dermot Bannon allows his children to add their own touch to the kitchen floor of their new home on RTÉ's Room to Improve. Video: RTÉ 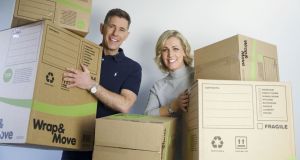 Architect Dermot Bannon and quantity surveyor Patricia Power, who has to inform him his garden will cost upwards of €100,000

I’ve got my wish and this is now a Dermot Bannon-themed column. You can say it had “room to improve” so I’ve fitted it with metaphorical big windows in the sense that my telly is a big window through which I can see Dermot Bannon’s worried head (I believe phrenologists call this type of head “a Stretched Tubridy”). This plan might be hampered by the fact Dermot Bannon is not actually on television every week, but I figured that I can just spy on him from the wall cavities of his house. Thanks to last week’s Room to Improve, I’ve a pretty good idea of the floor plan (I called into the Irish Times lawyer to check I was on a sound legal footing with this. He was spinning a revolver on the table and drinking whiskey. “Whatever. Do what you like,” he said).

The premise of this mini-series of Room to Improve is that Dermot is working on his dream home, a Freudian monument to his frazzled sun-obsessed notions. When future archaeologists are making sense of the heavily-windowed extensions of the early 21st-century Irish, this will be his Great Pyramid of Giza. And like the pyramid of Giza there’ll surely be skeletons in the foundations.

Last week, we saw Dermot overcome a psyche-shattering hurdle. The existence of night had transformed his beloved big windows into terrifying black mirrors which reflected the gnawing void within. This existential problem has beggared great thinkers for millennia. Dermot overcame it by putting lights in his garden. It turns out that philosophers just overcomplicate things.

He means this to sound sophisticated, I think. It just sounds as if he’s planning to get pissed in a shed a lot

The needs of episodic television are such that, by the start of episode two, Dermot is already in the middle of another anxiety spiral as he contemplates flooring options. Classic Dermot. He favours terrazzo flooring which is as black as pitch, no doubt reflecting the darkness he saw in the void last week, but he’s wracked with doubt. His allegedly real wife, “Louise” (you wouldn’t know her; she goes to another school), is still absent and can’t help. All we know about her is that she has few opinions on her living conditions and is content to live bedazzled and sun-giddied in an illuminated glass cube of Dermot’s devising. So Dermot enlists the first of several surrogate wives to help him make the choice. There are many surrogate wives on this programme. One is called “Buster” (I presume Dermot named him himself) and he loudly bemoans Dermot’s taste in panelling.

Another of Dermot’s surrogate wives, plant-fan Diarmuid Gavin, drives Dermot to his home in Wicklow to look at his garden. Diarmuid takes us through an Escher-like maze of winding paths and shrubs. What we can see of his actual house is just a balcony overlooking the foliage like the prow of a ship. On this, Diarmuid Gavin no doubt surveys the world like a horticultural Popeye. “I yam what I yam!” I imagine him saying.

Down at the end of the garden, there is a corrugated iron shed that somehow touches Dermot’s corrugated iron heart. Dermot and Diarmuid refer to corrugated iron, incidentally, as “crinkly tin”, which will henceforth be registered alongside “shiny yellow” (gold) and “boom boom dust” (plutonium) in my table of the elements. Dermot is charmed by Diarmuid’s shack and imagines himself having a glass of wine there at the end of a working day. He means this to sound sophisticated, I think. It just sounds as if he’s planning to get pissed in a shed a lot.

Diarmuid and Dermot retire to the deck of the former’s land boat and Diarmuid shows Dermot pictures of gardens. They discuss pampas grass, of which there is a specimen in Dermot’s garden. Diarmuid explains that pampas grass in a garden is a sign that swingers live there. “So should I keep it or not?” asks Dermot and I imagine he touches Diarmuid’s hand suggestively (check out my Dermot/Diarmuid fan fiction for more details).

Back in Dermot’s folly, Dermot enlists his “children” to throw personalised stones into the not-yet-hardened terrazzo flooring. Unable to cast their signature rocks in a manner that pleases their father’s aesthetics (he more or less points out the areas he wishes them to choose) the Nameless Children of Bannon are not seen again.

Bannon has now integrated the client, architect and gardener sides of himself. No theologian can properly explain the mystery of this holy trinity and not one of the trio can be reached on the phone by the builder or cares about the budget. It’s also unclear which Dermot Bannon accidentally designed the house so that the flue of a stove fed smoke directly back into the building via a bathroom window. Filling the house with fumes is apparently a bad thing despite the fact everyone on this project is probably already huffing glue just to get though the day.

Quantity surveyor Patricia (“Patricia!” cries my non-fictional wife) arrives to be gobsmacked by Dermot’s rapidly growing money pit. Her face beginning to resemble Edvard Munch’s The Scream, she tells him his garden will cost more than a hundred grand. Dermot insists that he’ll get his indentured kinfolk to do it for free. And so, many differently-sized Bannons arrive and begin gardening. His brother Podge turns up and tells us that as a child Dermot was obsessed with skirt-discarding pop wonks Bucks Fizz and that he even made a model of the time they crashed their bus. He says this without further explanation. It haunts me still.

When the job is done, everyone sits around drinking and Dermot becomes emotional. While his tears are normally like sugar to me, when he recalls his late horticulturist father it’s actually quite touching.

Dermot and Diarmuid Gavin clamber into the bath together to gaze at the dome of Corpus Christi church. This makes me think, somehow, of the more romantic moments in Titanic

Eventually it’s time to consider the finished work. The name Room to Improve under-promises. It speaks of low-wattage incrementalism, like “lots done, more to do” or “a future to look forward to”. But Bannon has upended the architectural world order here and it is a wonder. Three eaves jut out the back of the house, a troubling number of eaves, while an imposing modernist window looms from the front like the monolith from 2001, A Space Odyssey. If this window could speak, it would be screaming the exact date and location of your death. Dermot hopes that it’s respectful of the house’s original period design.

At the end of the programme Dermot gathers his collaborators in his new kitchen. For a moment I worry that, like the pharaohs of old, he’s planning to have everyone walled up alive with his sarcophagus. It turns out he just wants to have a party. There’s still no sign of “Louise” (she lives in France; he met her on holidays). Down the back of the garden there’s a corrugated iron shed and an open-air bath, much like Old Man Steptoe might have in his garden. Dermot and Diarmuid Gavin clamber into the bath together to gaze at the dome of Corpus Christi church. This makes me think, somehow, of the more romantic moments in Titanic. Then the programme credits roll to Bucks Fizz’s Making Your Mind Up and this reminds me, once again, that there are many things in the universe that are just baffling and unknowable.

Passchendaele: A killing field of mud
8

Pickbait: How to Argue with a Racist and How to Be a Fascist
10