Radio Review: Presenter seems ill-suited to venerable format as Off The Ball carries on regardless 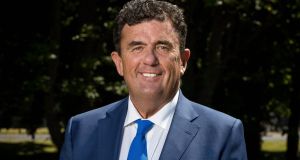 At a time when those who still have a job need to adopt new work practices, even household name presenters find themselves obliged to operate outside their comfort zone.

For some, this entails broadcasting from home, the radio equivalent of working on Zoom, but with a more reliable internet connection. But others have been forced by current circumstances to change tack completely. For instance, with his day job largely redundant, Des Cahill has had to make the transformation from affable, lighthearted sportscaster into affable, lighthearted music host.

As the title of his new show makes clear, Des’s Island Discs (RTÉ Radio 1, weekdays) lifts the format of the venerable BBC show of almost the same name, with Cahill asking sundry personalities about their lives via a selection of favourite music.

But the resulting programmeis so blandly formulaic that there’s a sneaking suspicion that the producers came up with the title first and worked back from there, much as Alan Partridge once pitched a show called A Partridge Among the Pigeons without knowing what it was about.

Now, Cahill is a reliably likeable host, who seeks to create a warm glow in his listeners rather than cast a cold eye over his guests’ musical choices. “In a hectic world, this is a little oasis of calm and nostalgia,” he says. Sure enough, the show is pleasantly untaxing – not a bad thing, following as it does the Covid-19 news marathon of Drivetime. But equally there’s little undue excitement or innovation.

Cahill goes through his guests’ life stories in largely chronological and slightly rote fashion. During his amiable conversation with comedian Katherine Lynch, Cahill sounds more interested in remembering their time together on reality TV shows than inquiring how his guest, as a young woman freshly arrived from Co Leitrim, discovered a “fantastic community” in Dublin’s gay scene.

When Lynch recalls winning the Alternative Miss Ireland contest, surely an intriguing topic, Cahill merely asks where it was held. One appreciates early evening audiences don’t want a deep therapy session, but this is less a stroll down memory lane than a perfunctory skip through the resume.

Unsurprisingly, Cahill sounds more engaged with guests from the world of sport, such as golfer Shane Lowry or former Kerry footballer Tomás Ó Sé. Here, the good-humoured atmosphere is lifted by knowledgeable questions, lobbed in softball fashion. But overall, Cahill rarely nudges his guests towards any great revelations, though the remark by Tony Allen of folk-country act Foster and Allen that the duo had sold 20 million records is flabbergasting.

The show speaks of a wider problem: what to do with sports programming when there’s no sport to cover?

That the show lacks the quietly reflective atmosphere of the original Desert Island Discs is perhaps inevitable. For one thing, in accordance with current etiquette, Cahill has to interview his guests over the phone, or the online equivalent, thus missing the chemistry of a face-to-face encounter. Morevoer, the show’s aim is to soothe rather than probe, providing a pleasant interlude from the avalanche of bad news.

That said, on Mystery Train (Lyric, Sunday-Thursday), host John Kelly regularly uses a similar format on Sunday nights when he interviews guests about their favourite music, to relaxing but also insightful and stimulating effect. Des’s Island Discs, on the other hand, seems like a misjudged use of its host’s talent, relying on his unassuming nice guy persona rather than his wryly perceptive reporter’s eye. Punnable name aside, Cahill doesn’t sound in tune with his new setting.

Still, the show speaks of a wider problem: what to do with sports programming when there’s no sport to cover? For Darren Frehill, sports correspondent on Morning Ireland (RTÉ Radio 1, weekdays), the answer has been to turn his bulletin into a greatest hits spot, revisiting sporting moments from the past.

Normally busy weekend shows such as Saturday Sport and Sunday Sport (RTÉ Radio 1) have gone one better and turned into actual oldies programmes, ceding the airtime to digital music station RTÉ Gold. That the latter channel is due to be axed soon may be taken as a cautionary lesson on shortsighted costcutting measures, though don’t count on Montrose management seeing it that way.

These options aren’t available to Off The Ball (Newstalk). The show is such a crucial brand to Newstalk that taking it off air is unthinkable, while filling three hours nightly with clips of historic sports landmarks is a big ask. The solution is to do what Off The Ball has always done best – carry on talking regardless.

It’s not that the show has forsaken its brief. There’s still news to be covered, albeit of the off-field intrigue variety. But the show has always had an appealing shaggy dog quality, so it doesn’t seem odd when presenter Joe Molloy opens Wednesday’s show with a lengthy discussion on the merits of the UK and US versions of sitcom The Office with co-anchors Nathan Murphy and Richie McCormack.

Meanwhile, the show’s signature long-form interviews are enjoyably offbeat. On Tuesday, Molloy talks to Eddie Jordan, who candidly recalls his career as a Formula One boss. According to Jordan, mercurial team member Eddie Irvine could have been champion, only he was “the laziest driver”.

But Jordan also talks expansively about childhood, music and religion, holding forth at such length that Molloy practically has to usher him off the phone. Even for non-fans of motor racing, it’s a showily compelling performance.

The same night, Molloy talks to economist (and Irish Times columnist) David McWilliams about supporting Leeds United, before prodding his guest to comment on the pandemic crisis. McWilliams neatly conjures up the world of Irish kids following English teams in the early 1970s, though his judgments on the economics credentials of European Central Bank president Christine Lagarde may perplex listeners hoping for more memories of Gilesy sticking it in the onion bag.

But again, it’s entertaining radio, showing how deft presenters and an imaginative approach can overcome a dearth of obvious subject matter. Even without sport, Off The Ball is on song.

Even as The Poetry Programme makes a welcome return to Sundays on RTÉ Radio 1, the week’s most jarringly memorable poetry comes on Liveline. On Tuesday, Joe Duffy hears from Dorothy Duffy, whose sister Rose Mitchell died from Covid-19 on April 4th. Dorothy reads a poem she’s composed in Rose’s memory, called My Sister Is Not a Statistic.

Her voice shaking, Dorothy expresses sadness and anger at the official descriptions of those who die from the virus. “Among the platitudes and lowered eyes, an older person with underlying health conditions, a pitiful way to lay rest the bare bones of a life.” The visceral impact is immediate and undeniable.

Joe Duffy says the poem “reminds us that behind every figure is a sister or a brother, a father or a son, a husband or a wife”. It certainly shows how art can help us make sense of life, or vent fury at it.

John Hume: the politician who made peace possible
6

Shelbourne statues: Will we ever see them on St Stephen’s Green again?
7

John Hume restored to his rightful place in Irish history
8

From Dukes of Hazzard to Kanye West: The Confederate flag curse
10 John Hume, tough but subtle architect of the peace process
Real news has value SUBSCRIBE