TV review: 19th century building is a home in which you’d be happy to be locked down 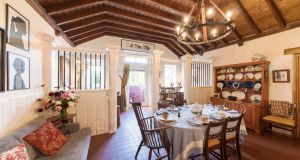 The dining area in Ethna Dorman’s converted carriage house, which won the 2020 Home of the Year title. Photograph: RTÉ

There was a certain poignancy to the judges’ deliberations in the final of Home of the Year (RTÉ One, Tuesday, 8.30 pm), the filming evidently having taken place pre-lockdown when things like “character”, “personality”, Louvre levels of glass, window seats and skylights were the criteria used to choose a winner.

Now, of course, all that matters is space, so Sean and Jason were desperately unlucky. Their home in Cavan is so roomy Sean could be quarantined in it for 18 months without even being aware Jason was quarantined there too. They would, then, have cruised to the “Lockdown Home of the Year” title, but, instead, had to settle for a top three finish.

Mind you, if judge Peter Crowley had had his way, their home would have been one of the first to be eliminated in the judging process because their dining room was, he sighed, in “a circulation area”. Fellow judges Hugh Wallace and Deirdre Whelan didn’t think this was an issue, but for Crowley, recoiling at the idea of people passing through gawping at him while he had his dinner, you sensed it was enough for the designer to stand trial in The Hague.

It wasn’t the first – or last – time Peter and Hugh disagreed on the seven contenders. In fact, they didn’t agree on any of them, so the pair could have retired to the pub (God be with the days) and left Deirdre to it because she was clearly going to have the casting vote.

The sceptics, of course, suggest that the tension between Hugh and Peter is artificial, that it’s not an actual Twink v Linda Martin type situation, but it certainly felt real when Hugh referred to the house “with the big black box on the back” in a rather sniffy manner. And then, somewhat bitingly, added, “it was an architectural masterpiece according to you, Peter”.

For Peter, this was one barb too many. “I wonder at this stage are you just against modern architecture, Hugh,” he replied. “Oooooh,” said Deirdre, sensing Hugh was about to remove his cravat and jumper draped over his shoulders and ask Peter to step outside.

But they refocused on the task in hand, Peter ruling out the lighthouse keeper’s cottage because if it didn’t have a lighthouse beside it and a view of the sea, it would, in so many words, be bog standard. That is, though, like saying that if Roger Federer hadn’t a terrific backhand and forehand he’d never have won Wimbledon.

Also, the lighthouse keeper’s cottage had elevated beds to allow you see the sea, which, in itself, is enough to make it Home of Any Year.

But no, the 2020 honour went to Ethna’s very gorgeous converted 19th century carriage house in Co Dublin, which meant Peter had been out-voted, Hugh just managing to suppress the urge to form the shape of an L with his thumb and forefinger on his forehead.

Peter was magnanimous in defeat, though, conceding that while Ethna’s home lacked skylights, it was still lovely. “Sheer magic,” said Hugh of the winner. That it was. A home in which you’d be happy to be locked down.