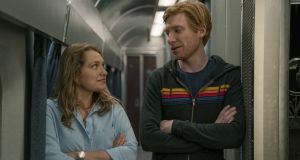 Merritt Wever as Ruby with Domhnall Gleeson as Billy, on a train from New York to Chicago in Run

Ruby Richardson probably isn’t the first person to have sat in a vehicle in a supermarket car park listening to a doleful Elvis tune on the radio, being overcome by melancholia and an overwhelming sense that life at that precise moment felt a bit rubbish.

The only news of note she had for her husband when he rang was that she had bought a new yoga mat, his sole concern that she get home pronto because he needed her there for a delivery.

That she would do, she promised, and when the call ended she slumped back in to her despondency.

The difference between Ruby and most everyone else to have endured the experience is that their phones tend not to then beep with a message from a mystery man called Billy that simply says: “RUN.” She hesitated at first, but Ruby then replied: “RUN.”

And that she did, heading straight for the airport to take the next available flight to New York, bringing only her handbag and yoga mat. And once there, she boards a train for Chicago, upon which also happens to be Billy.

So began the first of eight episodes of Run (Sky Comedy, Wednesday, 9pm), the HBO series starring Merritt Wever as Ruby and Domhnall Gleeson as Billy Johnson. And with the team of Vicky Jones and Phoebe Waller-Bridge (Killing Eve, Fleabag, amongst others) behind it, Run came with high hopes.

Figuring out what the blazes was happening was a test at first, but gradually we learn that Ruby and Billy haven’t seen each other in 15 years since they were an item in college. Back then they hatched a plan where some time in the future one would text “RUN” to the other, and if the same reply came quickly, they would reunite, travel together for a week and then decide if they’d return to the lives they’d temporarily abandoned or stay together.

So, that journey begins on the train to Chicago, all the while Ruby’s husband frantically texting her to ask where she is. Much of the drama centres around her struggle to get a signal to reply to him, so he won’t call the police, Amtrak evidently having similar problems to Iarnród Éireann.

While we don’t yet know a great deal about the lives they’ve left behind, other than Billy being a self-help author whose book (called Amazing. Period.) Ruby roundly mocks, one thing that is clear is the chemistry between the pair. It sizzles. To the point where you’re shouting “get a room!” at the telly. And, as luck would have it, Ruby has booked one on board, the first episode concluding with Jack, their “Amtrak bedroom attendant”, telling them over the intercom that it’s ready.

But there’s as much tension in the air as there is chemistry, Ruby in particular overcome by suffocating panic at times over her decision to run. And while it’s billed as a romantic comedy, you’ve a notion there’s a dark turn or two to come yet. The opening episode was more than promising enough to make you stay on board to find out just where this journey leads.