The actor on Run, his famous father, and spending cooped-up days in his pyjamas 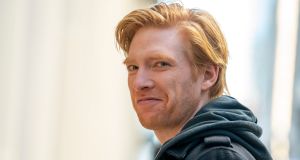 Domhnall Gleeson: lazing around the house in Dublin is something of a novelty for the 36-year-old. Photograph: HBO/Sky

It’s 2.15pm on a Wednesday afternoon when I ask Domhnall Gleeson what he’s wearing. With face-to-face interviews abandoned in favour of the telephone, and the actor confined to his Dublin home, Gleeson could have made up something classy. Instead, though, he opts for total honesty: “Oh s**t, this is embarrassing.”

Gleeson is, in fact, sat on his bed in a pair of pyjama-adjacent bottoms his mum got him a few years back for Christmas, and a scruffy T-shirt that – looking down to jog his memory – he realises is on inside out. He recently finished shooting a Channel 4 sitcom in which he plays Doofus. His haircut, Gleeson says, perfectly suits the name.

Really, he assures me, most days have gone better. He’s getting dressed, going for walks within the prescribed 2km radius. It’s just this afternoon that he is still in bed, looking like a Lego man in his pyjamas.

Yeah, f**k it, let’s go big and give people something to read about. Phoebe hits people; she’s got body odour. I’m not really sure where to go with this… No, she didn’t hit anyone that I saw, and as far as I can remember she smelt lovely

Lazing around the house in Dublin is something of a novelty for the 36-year-old. He has been busy the past few years, appearing in three Star Wars films, Peter Rabbit and its 2021 sequel, and the widely slated The Kitchen, which we will place to one side. Soon there will be Frank of Ireland (with its aforementioned haircut) and already there is Run, the much-anticipated HBO comedy-romance-thriller created and written by Vicky Jones – director of the original Fleabag stage show – and produced by her long-time collaborator Phoebe Waller-Bridge.

Gleeson and Merritt Wever (from Nurse Jackie and Godless) play exes with an escape plan from the new lives they have created since their breakup. On receiving a one-word text, both know a time and location at which to meet. From there they attempt to rekindle their love affair. That is, if the other decides to show up.

Aside from an episode of Black Mirror and a handful of sketches, Gleeson has, until recently, steered clear of television. You can end up treading water while nothing happens in TV, he says, unlike films, which have to be wrapped up by the credits. In Run, though, Gleeson saw something different: a pilot script full of energy and excitement, although he makes no secret of the fact it was Waller-Bridge’s name that first got his attention.

The writer and star of Fleabag arrived on the shoot halfway through filming in Toronto and then out on location. “It’s such a funny thing to throw more praise at Phoebe,” he says. Yes, she’s talented, funny and quick on her feet; her reputation for being one of the most skilled people in her field is well deserved. “But,” he asks, “who the f**k needs to read more people speaking about how unbelievably amazing she is?”

He could just say she was crap...

“Yeah, f**k it, let’s go big and give people something to read about. She hits people; she’s got body odour. I’m not really sure where to go with this… No, she didn’t hit anyone that I saw, and as far as I can remember she smelt lovely.” At least he tried.

Despite the considerable hype around the release – it is Jones’s first big post-Fleabag project – Gleeson says he didn’t feel a heightened sense of pressure being a leading man with all eyes watching. And to be fair, with roles in both Star Wars and Harry Potter – two of the biggest movie franchises of all time – he is used to high expectations. Instead, he says, the names on the script were a comfort.

Gleeson is more tuned in than he would usually be to Run’s critical reception, now that there’s little he can do to distract himself; nothing stopping him clicking on links to reviews he otherwise might avoid. But whatever the reaction, the momentum of Run’s train-based storyline is maintained with the tense, fizzing on-screen chemistry between the lead characters. “It’s a funny thing when people talk about chemistry and worrying about it. I’ve never thought, Oh, s**t, I wonder if I’ll have good chemistry with x person.”

He reckons if you work hard and try to be generous – as long as your partner has some talent – the rest looks after itself.

And Gleeson is quick to praise Wever’s talent, even if he’s unsure about their off-screen relationship. “I’m not sure I really know Merritt at all,” he says. “I think she would probably say that I don’t.” That’s not to say they didn’t get on; Gleeson definitely enjoyed her company. He just often finds himself meeting people he has worked with after finishing a job – from Margot Robbie to Saoirse Ronan – and thinking, “Jesus, they’re totally different to how I remember them.”

Maybe Gleeson has got a bad memory, or more likely he is just not a fan of the showbiz life. That could explain why he steered clear of a move to Hollywood, instead opting to stick around in Ireland close to friends and family – a family that casts a long shadow.

It wouldn’t be unreasonable for Gleeson to object to talking about his dad, Brendan, in interviews. Constantly being compared with your Emmy-award-winning actor father could become irritating. But Gleeson jnr clearly admires his dad greatly, bringing him up twice of his own accord.

Right before we speak, he had been listening to Gleeson snr discussing on the radio how Ireland is coping with coronavirus. A few years ago Brendan appeared on national television to talk about the sorry state of the country’s underfunded health service. “He was on again today saying how proud he is that people in Ireland have come together to flatten the curve.” His son agrees.

And when talking about his tendency to be overly self-critical (something he wonders if he should have just never have mentioned during previous interviews: “Everyone feels it”), he compares his work ethic with that of his father. Stepping into a parent’s shoes makes him work harder. The pair are close; Dad is always on hand for advice.

Maybe it would have been nice to take my mam’s surname just to get it out there. I’m afraid I’m just not a good-enough son that it crossed my mind

“Look,” he says, “there’s no way in which he is a hindrance. I was aware, when I’d turn up on stuff, that there’d be a certain amount of ‘Maybe he got the job because of who is dad is’ or whatever. But it’s hard to make a film or a play happen, and if anyone has spent money on anything they’re not going to hire someone who can’t do the job just because they know your dad.”

Possibly, he adds, that was naive. Still, he never considered using a different surname when starting out, in an effort to distance himself from his father. Brendan Gleeson was less of a name during his son’s early years in the industry, he suggests, and everyone in Ireland would have known anyway.

“Maybe it would have been nice to take my mam’s surname just to get it out there. I’m afraid I’m just not a good-enough son that it crossed my mind.”

Despite appearing in his share of dystopian sci-fi, he fears none of it has helped him prepare for this pandemic. He has got a few projects to keep himself busy enough for now – and he’s excited about a play he was due to appear in this year, although he won’t tell me more in case it doesn’t happen.

“I’m just hoping and trusting that people will still want to go to the theatre on the far side of this,” he says, “That there is another side.” When we emerge, he believes, people will still want to go to the cinema and to the theatre. The Jackass film was on TV last night; seeing it at the cinema was the most communal event he has ever experienced. Everyone laughing and talking, holding each other; praying they wouldn’t do that thing with sandpaper. “We have to be responsible now, but we’ll get back to those things. We’ll want to experience stories; to laugh and cry together.”

Until then, though, Gleeson’s going to focus on the small victories, such as getting out of his pyjamas more often. – Guardian

Run is on Sky Comedy and Now TV; Mary Hannigan reviews it here

The Music Quiz: What was Shane MacGowan’s first band called?
8