Review: The TV presenter is self-isolating after developing coronavirus symptoms 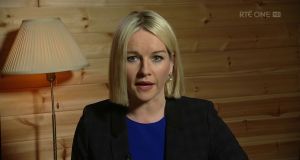 Claire Byrne presenting her show from her shed on Monday night. She has coronavirus symptoms. Photograph: RTÉ 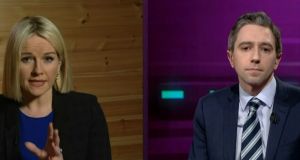 There was a time – a dim and distant era which ended roughly 10 days ago – when Claire Byrne presenting the country’s top current affairs series (RTÉ One, 10.35 pm) from her garden shed would have obviously been hilarious. Now, like most everything else, it is baroque, absurdist and low-key terrifying (or perhaps just terrifying terrifying).

Byrne is self-isolating after developing cold-like symptoms, as per new HSE guidelines. Her shed, as it happens, is lovely, with tasteful Scandinavian-style panelling and a lamp that ties the room together.

It’s a funny sensation, coming down with shed envy during the Covid-19 apocalypse. Still, watching at home many of us will hope we are never likewise required to front a high-rating current affairs broadcast from our own hut of horrors at the end the garden. Were I to do so, I would be vying for the camera’s attention with three kids’ bikes, an upended lawn-mower, and enough spiders to give Covid-19 bad dreams. I’d also muck up my ankle clattering into paint-pots on the way out.

Byrne isn’t carrying the show her own. In the studio journalist Sarah McInerney is helping with hosting. But first Byrne interviews Minster for Health Simon Harris, who repeats the Government’s line about the entire country needing to come together (even as we maintain a safe distance). Harris goes down well on Twitter, which demonstrates what a strange new world we’re in.

Seven days ago, Claire Byrne Live was filmed before a reduced studio audience seated two metres apart in observance of the new social distancing etiquette. But things have moved on – ie become a whole lot scarier; this week there is no audience.

Questions are instead posed by members of the public via Skype. An Irish doctor in New York wants the Minister to write a note so that he can come home and help fight the virus (does he actually expect Harris to produce a pen from his top pocket and do so live on air?).

The plight of shuttered restaurants is discussed while a mother wonders if it’s okay for her teenager to meet a friend. Apparently it is, provided they observe social distancing rules. If it was my teenager I’d explain we have a miraculous new technology called “mobile phones” and that hanging out with their bestie is not a priority at this exact moment.

The issue of mental health is also debated. We are urged to draw up a routine and to be considerate to those with whom we are going to be cooped up for the next “number of months”, the time scale for the Covid-19 nuclear winter set out by virologist Cillian De Gascon. And there is an attempt to interview presenter Baz Ashmawy, only for his dastardly Skype connection to let him down (very much a First World Problem we can agree).

“This might be a wonderful opportunity for families to get to know each other,” says Dr Harry Barry, an expert in dealing with depression, addiction and anxiety. Or at least that’s what I think he says. I’m too busy yelling at my kids to hear clearly.

And with that the final credits roll. In what form will next week’s broadcast take? One thing is certain. It won’t be Byrne and guests in front of an audience. That was the old normal. We are very much in the new normal – and for who knows how long?