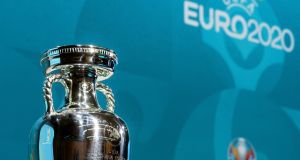 The 2020 European Championships have been postponed until 2021. Photograph: Pascal Muller/Inpho

Euro 2020 has been postponed until the summer of 2021, Uefa has announced.

A statement confirmed the postponement, with the dates of June 11th to July 11th, 2021 proposed.

The official announcement from European football’s governing body also confirmed that the Euro 2020 play-offs, including Ireland’s clash with Slovakia on March 26th, will now be played in the June 2020 international break.

It also confirmed that the 2020 Copa America would also move to 2021 to enable South American players based in Europe the opportunity to finish their league campaigns.

The statement did not confirm new dates for the Champions League and Europa League finals, with June 27th and June 24th having been reported.

There was also no confirmation at this stage as to whether the Women’s Euro 2021 would be moved as a result of the men’s tournament being postponed.

Instead the statement said decisions on dates for other Uefa competitions would be taken “in due course”.

The statement also hinted at some kind of compromise concerning the 2021 Club World Cup, with Uefa president Aleksander Ceferin saying: “I would like to thank Fifa and its president, Gianni Infantino, who has indicated it will do whatever is required to make this new calendar work.

“In the face of this crisis, football has shown its best side with openness, solidarity and tolerance.”

A working group has been set up to “examine calendar solutions”, the statement said.

Ceferin added: “We are at the helm of a sport that vast numbers of people live and breathe that has been laid low by this invisible and fast-moving opponent.

“It is at times like these, that the football community needs to show responsibility, unity, solidarity and altruism.

“The health of fans, staff and players has to be our number one priority and in that spirit, Uefa tabled a range of options so that competitions can finish this season safely and I am proud of the response of my colleagues across European football.

“There was a real spirit of co-operation, with everyone recognising that they had to sacrifice something in order to achieve the best result.

“It was important that, as the governing body of European football, Uefa led the process and made the biggest sacrifice. Moving Euro 2020 comes at a huge cost for Uefa but we will do our best to ensure that the vital funding for grassroots, women’s football and the development of the game in our 55 countries is not affected.”