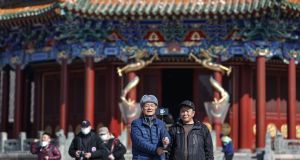 Two man take a selfie at the Imperial Palace as it reopens to the public due to a reduction in COVID-19 coronavirus cases in Shenyang in China’s northeastern Liaoning province on March 17, 2020. - China reported on March 17 just one new domestic coronavirus infection but found 20 more cases imported from abroad, with more regions imposing quarantines on foreign arrivals in a bid to stem the disease being brought in from overseas. (Photo by STR/AFP via Getty Images)

The coronavirus outbreak started as a propaganda disaster for the Chinese government. But now - with the number of new cases falling sharply in China and rising quickly in the US and Europe - Beijing has reframed the narrative. China’s new story points to the Communist party’s success in taking draconian measures to control the disease and contrasts that with the chaotic response of the US and much of Europe.

This version of events is designed for both domestic Chinese and international consumption. If it gains traction, the geopolitical effects of the coronavirus will linger - even after a vaccine has been found for the disease. The belief that China is on the rise and the west is in inexorable decline will gain new adherents. And arguments for authoritarianism and against democracy will be made with increased boldness - in both China and the west.

That turn of events looked unlikely when the virus took hold in China. Unsafe practices in Chinese markets, followed by an official cover-up, had helped the disease spread out of control. The US, Italy and other countries banned all flights from China, contributing to the sense that the country had become a pariah. Even at the time, however, pro-regime voices in China insisted the Communist party would emerge vindicated from the crisis. Eric Li, a nationalist political commentator, argued to me in late January that “state capacity and a collective culture are the two uniquely strong characteristics of China’s political system?.?.?.?that will ultimately enable the country to successfully combat this crisis”.

At the time, this seemed like a rather desperate argument. But China did indeed confine some 60m people in Hubei province to their homes, while imposing movement controls on hundreds of millions more. And, for now, this seems to have worked. Nicholas Christakis, a Yale professor, expressed a widespread sentiment when praising China for “an astonishing achievement from a public health point of view”.

As the virus has subsided in China, so Beijing has pivoted to making gestures of support to the rest of the world. Last week, Chinese doctors flew into Italy with 31 tonnes of emergency medical supplies - arriving just as Italians were bemoaning a lack of support from their EU neighbours.

The Chinese propaganda machine is using this turn of events to shower praise on President Xi Jinping and the Chinese system. The People’s Daily recently boasted that, “China can pull together the imagination and courage needed to handle the virus, while the US struggles.” One article for the Xinhua news agency even claimed that Mr Xi’s handling of the crisis demonstrates that he has a “pure heart, like a newborn’s”.

These kinds of plaudits are ludicrous. But the Chinese leader’s behaviour genuinely looks good when compared with the floundering of US President Donald Trump - who at various times suggested the disease would disappear “like a miracle”, or that it was a hoax got up by his enemies. It is easy for many western liberals to lambast Mr Trump - but harder to acknowledge or remedy the flaws in the American democratic system, which put an obvious incompetent like him into the White House. The US system has also exhibited wider deficiencies - such as the ramshackle state of its public health system, which has so far led to remarkably little testing for the virus. The result of all this political malfunction may be the unnecessary deaths of many thousands.

Europe, meanwhile, is now the epicentre of the epidemic. The reluctance of the EU and British governments to take tough measures quickly was partly a failure of imagination. But it also reflected the difficulties that democracies will have in sustaining Chinese-style restrictions for long. With Spain, Italy and France imposing harsh controls on people’s movements, the administrative and social capabilities of European democracy are undergoing an extraordinary stress test.

It is still far too soon to concede the argument to the authoritarians. In Asia, democracies such as South Korea, Singapore and Taiwan seem to have done a good job in restraining the spread of infection without resorting to total lockdown. Instead, they have relied on widespread testing and the rapid implementation of social distancing - measures the US and the EU were probably too slow to embrace. The Chinese government also still faces awkward questions about how it let the virus get out of control in the first place, and about what will happen as movement restrictions are eased. Official anxiety about these issues is reflected in the disappearance of some who have dared to criticise Mr Xi’s handling of the crisis. Some Chinese officials have also demonstrated their anxiety to shift the blame, by suggesting the virus actually originated in the US.

That kind of crude propaganda looks unnecessary because the global narrative about coronavirus is already shifting in China’s favour. Of course, this could change as events unfold at a bewildering pace. But at the moment, it feels as if China is past the worst - while the outbreak in the west is only just beginning.

The last global crisis - the financial meltdown of 2008 - triggered a loss of western self-confidence and a shift in political and economic power towards China. The coronavirus crisis of 2020 could force a much bigger shift in the same direction.