Memeing of Life: Team created one of most soberly fascinating threads in living memory 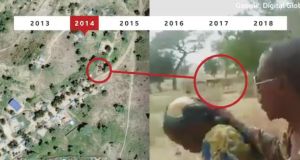 As part of the investigation, BBC Africa tracked the outlines of visible mountains in Google Maps, using satellite imagery to isolate nearby buildings and triangulate the time of year from weather patterns

With the mid-90s dotcom boom came a heyday of speculative pieces about the web, positing a day-glo, cyperpunk fantasyland of unseen varieties of communication.

Those prognosticators would doubtless be impressed by the ease with which photos and videos can be embedded in articles or social media, and the explosion of YouTube and podcasting for every conceivable topic and audience.

But even now – 20 years after Encarta told us every textbook would sing to its readers, and every livingroom would have a glow-in-the-dark VR headset – most of the web’s text, audio and video are kept largely separate, even when displayed in the same piece.

There have been some notable exceptions, not least last year’s science fiction work 17776: What Football Will Be Like In The Future, which combined video, maps, text and a variety of other web nuggets to create a masterfully immersive experience, or the excellent Visual Investigations series by the New York Times, featuring incredible data work from Irish data forensics maestro Malachy Browne. This week, however, saw a stunning example of just how documentaries of world events could live up to all those promises of a truly multi-media future web.

In July 2018, a horrifying video began to circulate on social media.

2 women & 2 young children are led away by a group of soldiers. They are blindfolded, forced to the ground, and shot 22 times. #BBCAfricaEye investigated this atrocity. This is what we found... pic.twitter.com/oFEYnTLT6z

The piece in question was a stunning thread by BBC Africa which dissected a harrowing video of Cameroonian soldiers, in which they appear to murder women and children in cold blood. Rather than show the most distressing parts of the video itself, the BBC team instead showed insights it had gained from analysing it frame by frame; not as a sensational horror, but as criminal evidence.

The thread lays out a series of GIFs and videos which take the reader through the location, identity and methods of the men responsible, and the methodology used to verify this information.

We see them tracking the outlines of visible mountains in Google Maps, using satellite imagery to isolate nearby buildings and triangulate the time of year from weather patterns, even calculating sun-shadow angles to estimate the time of day.

The team use weapons pictured on-screen for mere seconds to verify the makes and models of guns, and eventually they identify three of the men shown on screen by their Facebook and online media accounts. The result is one of the most soberly fascinating threads in living memory, and a glimpse at the future of documentary film-making.

Far from a mere flashy exercise in visual storytelling, the investigation prompted a backtrack from the Cameroonian government, which has ceased denying the claims and now says it has arrested the men in question. We may not have virtual reality headsets in every home, but web-sourced data forensics may promise us something much more real.