Conor Pope: 20 years of Google has turned us into lazy know-it-alls

Google, which turns 20 this week, has ruined medicine, map-making and pub quizzes 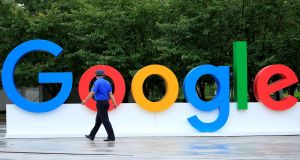 When you google Google’s birthday the results are confusing. On September 15th 1997 the oracle that has made us all-knowing all of the time (and simultaneously ruined table quizzes, made knowledge gleaned through old-school methods like reading or researching redundant, and killed the map and asking-for-directions businesses stone dead) registered the domain name google.com.

It took almost a year before the first cute Google doodle appeared. That happened on August 30th 1998 and starred a stick man who explained – albeit in an oblique fashion – to the handful of people using the search engine at the time that its creators, Sergey Brin and Larry Page, were heading to the Burning Man festival in the Nevada desert.

It wasn’t incorporated as a business until September 4th, 1998 when the two lads returned from the festival. But it celebrates its birthday on September 27th.

To find out why, we googled our question (obviously) – and in seconds Google told us that Google had changed its birth date in 2002 some searches suggest it was 2005 so you can take you pick – to coincide with an announcement it was making about the colossal number of web pages it was then able to index and search.

When you are the most powerful tech company in the world you can do such things.

So by its own fluid measure then, it turns 20 on Thursday, and will do so as one of the most innovative companies the world has ever seen.

It has also given the world a verb which is more than Apple, Amazon and Microsoft have managed over the past two decades. Can you imagine anyone ever saying “I binged that” with a straight face? Us neither.

All its monumental achievements are not too shabby given that it was – relatively speaking – late to the search game. Yahoo!, Alta Vista and AskJeeves all had successful search engines before Google was born, but it left them all for dead – shortly after it came close to killing itself.

In 1998, when the company was still in nappies, Page and Brin called the Yahoo! people and offered them the company for $1 million. In a decision that proved to be 800 million times worse than passing up on the Beatles, Yahoo showed Page and Brin the door. Incredibly, Yahoo! missed the boat a second time six years later, when it deemed a price tag of $5 billion too high.

Google is valued at $800 billion today. And at the rate it is making money, it will have joined Apple and Amazon in the trillion dollar club before it turns 21.

While it has fingers in many pies, its search function is the thing that changed everything. There is virtually no fact that we can’t find out in a heartbeat, thanks to its all powerful engines. It is, of course, a double-edged sword since it killed lively pub debates. Virtually every disputed topic is now resolveable in the length of time it takes to take out a smart phone.

Of course we have all become lazier as a result of Google, and we now value genuine experts less. Yet while we have been empowered like never before, sometimes we haven’t a clue how to wield our power. This has proved to be a particular minefield in medicine, where ill-advised searches can turn virtually every symptom into terminal cancer and cause patients who have spent 15 minutes searching a particular ailment second-guess doctors who have years – and sometimes decades – of expertise in specific areas of medicine.

Google has also made it harder to disappear and harder to hide indiscretions of the past if they have been documented somewhere online.

It has also turned billions of consumers into a product. Google quietly collects large volumes of information about everyone who uses any of its products –unbeknown to most of us – and uses that information to target everyone with ads for products it thinks we might like. And many of its business dealings are notable for their lack of transparency.

It has also hijacked the news by harvesting content produced at great cost by news organisations all over the world. It ranks and presents it to its users for free, with barely a nod and certainly very little by way of advantage to those who paid to create it.

And very serious questions have been asked about how it does business in countries such as China, where the state continues to exert fierce restrictions on the free flow of information. Helping countries block information seems at odds with the company’s mission statement which has always been “to organise the world’s information and make it universally accessible and useful”.

Its unofficial slogan, incidentally is: “Don’t be evil” although Alphabet, the umbrella company under which it operates, has gone instead for the phrase: “Do the right thing” – which leads you directly to the wonderful Spike Lee film of the same name if you google it.

While Google has an uncanny knack of getting things right and employs the best and the brightest and gives them all free food and bean bags – as long as they devote their lives to the company and practically move into the office – it does makes mistakes. Remember Google Plus?

A blow-by-blow guide to the Easter Rising
7