The Bailout: One day we’ll look back and laugh. But not yet

Review: Colin Murphy’s politicians try to get their heads around an €85bn disaster 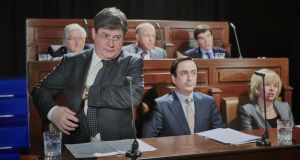 The Bailout: Denis Conway as Taoiseach Brian Cowen in Colin Murphy’s TV version of his play Bailed Out!

Even at the distance of almost a decade, the details of how Ireland found itself bailed out by the troika – to the tune of €85 billion and a national cost that is more incalculable – can be hard to comprehend. That’s nothing compared with the chaos at the time, according to Colin Murphy’s “play for television”, The Bailout (Virgin One, Monday, 10pm), in which characters based on real political figures attempt to get their heads around it, occasionally in pithy terms.

“Let me just see if I have this right,” one political adviser glowers as Taoiseach Brian Cowen (Denis Conway), Minister for Finance Brian Lenihan (Declan Conlon) and the economist Peter Bacon (Phillip O’Sullivan) consider the consequences of the government’s fateful 2008 bank guarantee, the spiralling national debt and the hawkish attentions of the international markets. “Our f***ing bankers borrowed money from these f***ers and now we have to pay these f***ers back? And they might lose confidence and f*** us anyway?”

Bacon considers this precis. “Hmm. That’s a rather approximate version.”

Combining fastidious research, off-the-record interviews and an economy of invention, Murphy is scrupulous, dutiful and fair to all parties

You could say something similar about The Bailout, based on Murphy’s play Bailed Out!, which follows his film The Guarantee, based on his play Guaranteed! Cumulatively, they count as a sober and sobering attempt to understand the financial crisis, the banking scandals and the momentous political decisions, a maelstrom finally shorn of exclamation marks.

This drama, told in two parts, does not forsake the rough stage aesthetic originally pursued by the director Conall Morrison, though, which gave the undertaking a frisson of journalistic, this-just-in urgency. With his codirector John Comiskey, the film version deliberately exposes the studio apparatus, leaving sets as merest indications, where actors’ wigs seem to have been chosen in a hurry.

Some will see shivers of Brecht, where Ali White’s exasperated adviser – a kind of commonsense chorus – breaks the frame to address us directly. Others may consider such frugality as its own kind of foreshadowing: the drama looks well acquainted with austerity.

Combining fastidious research, off-the-record interviews and an economy of invention, Murphy is scrupulous, dutiful and fair to all parties. Here is a genuine effort to understand what happened, the whens and hows, rather than to condemn individuals.

That has some consequences for the drama, though, which is human as well as national. Lenihan’s illness is treated as tactfully as the man wanted. “There’s no hope,” he remarks, shortly after learning his cancer is inoperable, but the ambiguity over private and public concern doesn’t last long: “We can’t possibly restore the confidence in the markets.”

The markets, the bondholders, the EC-ECB-IMF troika: these are dominant characters in the story – forever losing confidence, urged to be burnt or coming to town – and understandably difficult to embody. Instead we watch government ministers leaning across desks and shouting, weathering interviews, arguing with Jean-Claude Trichet of the European Central Bank, or reeling through public fiascos: the “12 Days of Christmas” unpaid-leave proposal; Cowen’s infamously slurry Morning Ireland interview; the “Let them eat cheese” scheme for free Cheddar.

It would be comic were it not so tragic: a nation losing its fiscal sovereignty, its jobs and its people. Perhaps one day we’ll look back on this and laugh. Just not yet.

Part two of The Bailout is on Virgin One on Monday, October 1st, at 10pm