If this doesn’t make you get the flu jab, nothing will

Review: ‘The Flu That Killed 50 Million’ is a riveting chronicle of the 1918 pandemic 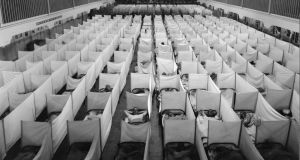 The Flu That Killed 50 Million: at the US army base where the virus mutated, rows of white sickbeds stretch out like tombstones. Photograph: US Naval History & Heritage Command/BBC

Know your enemy, they say. But the biggest killer humanity has encountered is still so roundly misunderstood that most of us don’t know that Spanish flu, like many notorious killers, was actually born in the United States. It was borne everywhere else within 500 days of the initial outbreak, in March 1918, killing between 50 million and 100 million people.

The Flu That Killed 50 Million (BBC Two, Tuesday, 9pm), an otherwise breathless, riveting chronicle of the pandemic, takes the most cautious estimate for its title, but it is alarming in every other respect. If Andrew Thompson’s documentary moves like a disaster movie, it has very good reason.

Narrated with clenched insistency by Christopher Eccleston, it maps the spread of the virus using titles that slam and shatter, and feverish graphics that cover the earth like seeping ink blots.

More than 1,000 US soldiers fell ill, all young fit men, and 38 died. In less than a month the virus had spread to the trenches of the first World War

Albert Gitchell, a Kansas farmhand, contracted the virus from a bird and, like Typhoid Mary before him, spread his infection unwittingly as a cook, in his case for the US army. It’s stunning to see photographs of the base once the virus has mutated, now airborne and aggressive, where rows of white sickbeds stretch out eerily like tombstones. More than 1,000 soldiers fell ill, all young fit men, and 38 died. In less than a month the virus had spread to the trenches of the first World War, and soon to cities.

The wartime press censored reports of the pandemic; only Spain, whose king fell gravely ill, wrote openly about the crisis. Foreign correspondents referred knowingly instead to the “Spanish flu”. Like the virus, the name stuck.

Through characters such as the valiant Manchester-based Scottish epidemiologist James Niven, a stricken frontline soldier, Alexander Jameson, and an ill girl, Ada Berry, the documentary puts faces and feeling to this terrifying new phenomenon. At the time, viruses were barely understood: “How scary must that be?” a scientist says today of a disease that had no recognised cause and no cure.

This was a peculiarly modern infection, spreading with cruel indifference in moments of relief and celebration, such as the armistice: “The crowded streets, the hugging and kissing, are perfect vectors for the virus.”

No one, among family members, friends or colleagues, was immune: “She finally drowned in her profuse, thin, blood-stained sputum,” one doctor records of his nurse, “constantly bubbling froth.”

Against this absorbingly vivid depiction of disaster, the viewer itches to hear about the antidote, the third-act hygiene crackdown, the sudden eureka of a mass-produced serum. But no. The flu just ran out of victims.

By the time the pandemic ended, completely reordering society, it had killed everyone it could.

Are we now prepared in the event of another global pandemic? The programme answers with a resounding, hardly reassuring, “ish”. Of those infected by the so-called Spanish flu, 3 per cent died; another epidemic like it – still our species’ biggest health risk – might kill only 1 per cent. In the immortal words of Kent Brockman, professor, would you say it’s time for everyone to panic?

See you in line for the flu shot.

Has Christianity been good for us? It depends on your history book
8

Helen Reddy, singer of feminist anthem I Am Woman, dies at 78
10