A 2008 bailout reconstruction, a Charles Manson doc and a moody Swedish cop drama 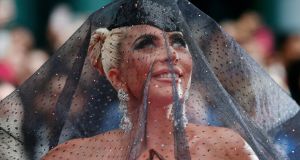 Lady Gaga, who joins Bradley Cooper, Ryan Gosling, Jodie Whittaker and Rod Stewart on the seapon opener of The Graham Norton Show, arrives for the world premiere of A Star Is Born at the Toronto International Film Festival on September 9th. Photograph: Reuters/Mario Anzuoni

Today with Maura and Dáithí
Monday, RTÉ One, 3.30pm
Maura Derrane and Daithi O’Se return for a new series of their infectious blend of afternoon craic, celebrities, gossip and chat, along with the best in lifestyle, fashion and beauty, competitions and all the taking points of the day. The topical show will run until next spring.

Ten years ago, the government signed the infamous bank guarantee but couldn’t avert the economic crash and collapse of our financial system. The Bailout is a brave attempt to dramatise what really amounted to a bunch of economists and politicians running around the corridors of power like headless chickens. This two-part drama, adapted from Colin Murphy’s play, promises to take viewers on a “whirlwind global tour” as it tracks the beginnings of a worldwide recession in which Ireland was one of the big losers. Somehow, I don’t expect this to have quite the same sturm und drang as our dramatic reconstructions of 1916.

Five years ago, Sam Evans and Shauna Guinn left their city jobs to embark on a road trip across the US to learn the secrets of American barbecue. Enthused with the spirit of smoke and fire, they returned to Wales with a mission: spread their passion for outdoor cooking. Now, having written a best-selling cookbook, opened their own restaurant and won numerous awards, the girls hit the road to celebrate the achievements of community champions across Wales and change the way the Welsh BBQ.

Few would bet against Cristiano Ronaldo claiming a record sixth Men’s Player of the Year prize at London’s Royal Festival Hall tonight, with his former Real Madrid teammate, Croatian Luka Modric and Liverpool’s Egyptian forward Mohamed Salah, also in contention. Ronaldo also features in the nominations for the Puskas Award for Best Goal, while Welshman’s Gareth Bale’s acrobatic effort for Real in the Champions League final against Liverpool is another on the list. Norway and Lyon’s Ada Hegenrberg, Dzsenifer Marozsan of Germany and Lyon, and five-time winner, Marta, of Brazil and Orlando Pride, have been shortlisted for the women’s prize.

The Martin Lewis Money Show Live – Christmas Countdown
Tuesday, UTV, 8pm
Yes, it is far too early to be having Christmas shows, but Martin Lewis says this is more about preparation than early celebration. Though many might start in January and store away those cut-price cards and presents for 11 months, apparently NOW is the optimum time to plan for a financially savvy festive season, and Lewis has plenty of top tips for consumers. With the help of Angellica Bell and the1 team in the studio, these top tips will hopefully ensure those new year credit card bills aren’t quite so jaw-dropping.

The Flu That Killed 50 Million
Tuesday, BBC2, 9pm
One hundred years ago, after an estimated 16 million dead, the first World War finally ended, and the world looked forward to a time of peace and prosperity. But little did they know that a far worse global catastrophe was in store: the Spanish Flu, which many soldiers brought home from the battlefront. The flu epidemic of 1918 killed between 50 million and 100 million people worldwide, dwarfing the Great War in its relentless march. This documentary, narrated by Christopher Eccleston, combines eyewitness testimony with dramatic reconstructions to recount the global efforts to stem the deadly pandemic.

Forget Anne Robinson or Jeremy Paxman – the contestants on this new series will be going up against arguably the toughest gameshow host of all time, Swedish action star Dolph Lundgren of Rocky IV, Universal Soldier and The Expendables fame. The games are all based on the genre as big Dolph challenges a team from Caerphilly to complete a series of questions and physical challenges as they make their way up a 53-storey building. If they fail, they’ll be leaving via the window.

Ben Fogle: New Lives in the Wild
Tuesday, C5, 9.15pm
New series. This one may not be as extreme as his recent televised expedition up Everest, but Ben Fogle is heading back to some remote and harsh environments. He begins by journeying to the Ozark National Forest in Arkansas, to live with master craftsman Robert. He discovers why this 70-year-old former medical student ditched his education for America’s counterculture 20 years ago, bought 200 acres of land deep in the woods, and raised a family of six children. Fogle sees how far-reaching Robert’s skills are, including cabin-making techniques dating back to the 13th century.

New series. Swedish thriller about a crooked cop (Dragomir Mrsic) who is racked with guilt after accidentally killing his partner and best friend in a gunfight, and decides to go straight. This proves easier said than done: as Alex struggles to cover the tracks that connect him to the scene of his friend’s death, he is assigned a new partner, a by-the-book female cop. In Swedish.

Prime Time: The Crash
Thursday, RTÉ One, 9.35pm
Can it really be 10 years since Ireland’s economy collapsed, leaving the nation broke, bitter and once again holding the begging bowl? It feels like longer, to be honest. This Prime Time special looks back at the catastrophic events of September 2008, when the government’s bank guarantee saw billions disappear down a black hole, condemning the country to an indefinite future of fiscal rectitude. (It wasn’t all bad: Mickey Harte’s Tyrone team won the All-Ireland football final, a feat they couldn’t repeat a decade later.) Miriam O’Callaghan and David McCullough look at what life has been like for the Plain People of Ireland over the past 10 years of austerity, and count the human cost of the crash. So, are we out of the woods? Not quite, but at least we’ve managed to paddle out of sh*t creek. We hope.

Gareth Malone’s All Star Music Quiz
Thursday, BBC2, 7pm
This one-off quiz hosted by choirmaster Gareth Malone features two celebrity teams of varying musical abilities who must answer Malone’s questions by playing their responses, and it may be a challenge for those watching at home to figure out exactly what they’re trying to express. Those taking part are MP-turned-presenter Ed Balls and ex-JLS member JB Gill, both on piano; actor John Thomson (drums); comedians Rob Rouse and Pippa Evans on guitar; and saxophonist Yolanda Brown – we’re guessing that she, as a professional, will have little difficulty in getting her points across.

It’s almost 50 years since members of The Family, a cult formed and controlled by Charles Manson, murdered seven people in California, including actor Sharon Tate, the pregnant wife of director Roman Polanski. This two-part programme offers a chilling insight into how Manson brainwashed a group of young people into following him before ordering them to kill. Its makers have used a vast archive of previously unpublished material collected by film-maker Robert Hendrickson, who’d had exclusive access to Manson’s cult. Among the most revealing moments are interviews with cult members as well as prosecutor Stephen Kay and FBI criminal profiler John Douglas.

She was once billed as the most beautiful woman in the world, but Vienna-born Hollywood movie star Hedy Lamarr has another claim to fame: in the 1940s, she coinvented the wireless technology that is still used today in Bluetooth. This documentary tells the story of how Lamarr left her fascist-sympathiser husband in the 1930s and was signed up by MGM. She would go on to marry five more times, but her most intriguing partnership was with composer George Antheil, with whom she developed a radio guidance system for Allied torpedoes during the second World War.

This new series looks at the intersection of old and new in Scottish and Irish traditional music, and how young musicians are putting a modern twist on age-old sounds. The series will feature performances from established acts such as Donal Lunny, Andy Irvine and Mícheál Ó Súilleabháin, along with upcoming musical innovators such as Aidan O’Rourke, Úna Monaghan, Talisk and Moxie. As Máirtín O’Connor says: “I think there is enough of the basic core of pure traditional music that is strong enough to withstand the innovation and experimentation.”

The Graham Norton Show
Friday, BBC1, 10.35pm
New series. The host is joined by multi-Oscar-nominated Bradley Cooper and pop superstar Lady Gaga, both starring in the hotly anticipated musical romance A Star Is Born. Plus, Broadchurch star Jodie Whittaker, shortly to begin her new incarnation as Doctor Who, and double-Oscar nominee Ryan Gosling, who is playing astronaut Neil Armstrong in biopic First Man. Rod Stewart also shares a word or two prior to performing his single Didn’t I, and a another bunch of intrepid audience members attempt to recount an anecdote from the dreaded red chair.

Rameses, Moses & Murder: Revealed
Friday, C5, 7pm
We’ve all seen the Hollywood epic, but this documentary explores looks at the figure of Rameses the Great, the third pharaoh of the 19th Dynasty of Egypt, as well as the legend of Moses, who as a baby was placed in a basket by his mother and left to float down the Nile in order to avoid a decree that every first-born male child be immediately killed. Later, an Israelite of the tribe of Levi, Moses led the children of Israel out of Egypt.