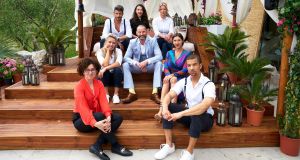 On First Dates Hotel, lovesick individuals lounge around the hotel pool before eating what looks like chipper food but artfully arranged

In the world of the reality-television show First Dates Hotel (Channel 4, Thursday), lovelorn mopers are sent away on a special holiday where kindly minders coax them into speaking the language of love. Irish tribal memory intrinsically understands this phenomenon.

Yes, the Gaeltacht was basically a sex camp established by Éamon de Valera to make sure he had a steady supply of workers to send abroad. It definitely didn’t improve our Irish, and it certainly gave us all something to talk about in confession (what we had in our day instead of Twitter).

This week’s couples include Zoe and Joe, who engage in “banter” but also speak of cat ownership, fatphobic bullying and bereavement

It’s a bit different in First Dates Hotel, where lovesick individuals are dispatched to the sunnier Amalfi coast. There they lounge around the hotel pool before eating what looks like chipper food but artfully arranged, across from a similarly composed human. (Are we not all the equivalent of chipper food artfully arranged?)

I like First Dates, and thus I like its slightly skin-damaged service-industry-themed spin-off. I like the fact both shows showcase people of all ages and gender preferences who are slightly heartbroken and emotionally wounded and who wear human clothes. The programme makers don’t just fill the hotel with brash and boastful hunks and hunkettes who stride around nudely with their weird lumpy bodies until something grotesque happens.

And I like the way that the whole resort features an army of waiters, bar folk, receptionists and room cleaners who each act as gently encouraging love coaches for these tentative lovers and are deeply invested in their romances yet are apparently content just to watch.

I imagine this is what the world must look like for contemporary pandas. (“Man, everyone here sure wants me to get it on, but I’m worried it’s more about their thing than mine,” is what I imagine the pandas are thinking.)

There are other people here, too, who seem like plants (of the spycraft rather than vegetative kind). There’s the glistening muscular man in tight orange Speedos who dispenses wisdom to love-shy young gentlemen who hover by the pool (the job I was originally hired for at The Irish Times), and there’s the woman at reception who raises her eyebrows at everything as though she’s Kenneth Williams visiting a showroom filled with exotic scabbards.

Over on RTÉ, David Brophy reminds us that fame and regal celebration aren’t really what music is for

This week’s couples include Zoe and Joe, who engage in “banter” but also speak of cat ownership, fatphobic bullying and bereavement. Their names rhyme, if you pronounce things phonetically (which I do), and frankly I’ve seen people get married for much worse reasons.

We also get James, who wants to meet a tall man, and Max, who is a self-identified tall man and confesses that he is “absolutely cacking myself”. I think he’s speaking metaphorically. If not, then this is also something that might happen at the Gaeltacht. Max and James bond over relatively recently coming out and having a similarly sarcastic sense of humour.

There’s also plucky Liverpudlian Cara and slightly geeky and bespectacled George. “My chat is terrible,” confides George to the muscular man in tight Speedos. Yes, something about this muscly guru makes people confide in him. (Did Jesus wear Speedos?) George gives examples of his “chat”. It is bad chat. George does not know the language of love, which is why he’s here in this posh Gaeltacht.

It turns out George doesn’t need chat. He just needs to be a good listener and a kind sweet boy. Cara has issues with body image, and George can’t believe it because he thinks she’s beautiful. And that is the sustained pleasure of the First Dates format. The people on it are genuine and awkward and funny and they mean well and they deserve love.

The episode is capped off by a visit from two former guests, Vanessa and Julian, now comfortably coupley and cohabiting. Then Julian goes down on one knee and a hotel full of panda-pimping sex-facilitators swoon.

Britain’s Got Talent (Virgin Media One, Saturday) began this week with series judge David Walliams, dressed as the queen, being lowered on wires down to the stage. This feels like treasonous subversion, until you remember that not only has Britain got a real queen (which is like having a Viking or a centaur) but the whole purpose of the show is to vet the commoners to see who’s worthy to entertain her at the Royal Variety Performance.

One act involves people slathering lumps of clay on their shoulders, on to which they then carve the outlines of a face. This troubles Cowell, as it’s how his daily heads are made

She’s basically a sentient symbol of hereditary wealth and hierarchical worth. It doesn’t matter who she is as long as she’s that. So have at it, Walliams! You may as well be the queen for all the good or bad it will do your quaintly doomed nation of ironically deferential, ideologically confused fuss-buckets.

This week’s episode gets close to the bone on a number of things. At one point a man jumps through literal hoops for Simon Cowell and his rictus-grinning acolytes. At another, someone resembling the devil comes out with a nice suit, red skin and big black horns (seriously) and sings an unexpectedly rich and tuneful version of I Want to Break Free. Cowell knows him from the office (hell).

A third act involves people slathering lumps of clay on their shoulders, on to which they then carve the outlines of a face. This troubles Cowell, as it’s how his daily heads are made.

Meanwhile, over on RTÉ, David Brophy reminds us that fame and regal celebration aren’t really what music is for, as he returns with a newly formed choir on Unsung Heroes (RTÉ One, Thursday). The members are family carers who look after spouses with dementia, aging parents and disabled children. They subsidise our State, and they do what they have to in a spirit of love and worried exhaustion.

Brophy, a good-hearted musical evangelist, visits them in their homes and then helps them find their voices in the most beautiful way. But even before we get to that, we see an aging father softly singing “You’re my forever friend” to his disabled adult son, and it’s nearly too much for me. Watch this, then watch it again next week and remember that most people are kind, some people are heroically kind and everyone should sing.