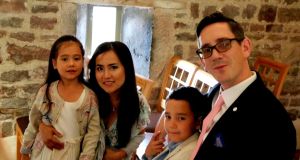 Rin and Robin draw inspiration from the East in their parenting style.

They say that if there’s a question mark at the end of a headline the answer is always no. With that in mind, I’m reviewing Britain’s Best Parent? (Channel 4, Thursday). This is basically a television adaptation of This Be the Verse, by Philip Larkin (the “They f**k you up, your mum and dad” one).

The programme-makers like to label parents as though they were Smurfs. This week we got what they label “lazy parent”, “Eastern-influenced parent” and “gender-neutral parent”. Yes, says you, “all three kinds of parent”. Actually, other types will feature in coming weeks, including “attachment parent”, “parent-centric parent” and “your da during the Community Games”.

But let’s go back to the title. It’s pretty dubious. I mean, obviously, Britain’s Best Parent is Dominic Cummings. As Boris Johnson has already explained, anyone not willing to drive 260 miles while shedding disease in a confined space at an impressively bladdered toddler because the people of London dislike you too much to babysit is barely a father at all.

And Johnson should know: he’s a father of... Well, it’s unclear. He has in the past refused to say how many kids he has. Yes, if Boris Johnson’s type of parenting style has a name, it’s probably something like “numerically vague parenting”.

In the normal run of events, if Cummings were not in this programme, demonstrating his own brand of Disease Dispersing, Vehicular Eye-testing Parenting, I’d sue the makers for false advertising. Except I can’t, because of the question mark. See how that works?

Soon other things will be retitled accordingly. The News? for example, or Love Island? (It’s really a Lust Archipelago.) I’m thinking of changing my own name to “Patrick Freyne?” due to existential questions that have crept into my life during lockdown.

We are, in effect, being invited to judge children, though it was probably thought that Judging Children, the Little S**ts was too stark a title for Channel 4

Then there’s the fact that entering Britain’s Best Parent? should probably be grounds for disqualification from Britain’s Best Parent? What parent is so sure of themselves? Surely they don’t know yet. Shouldn’t any show so titled really be a decades-long project involving interviews with the future employers, partners and psychotherapists of all the “children” involved? “We’ve heard from Desmond’s probation officer, now some testimony from his ex-wife, Sheila.”

The format is simple enough. In each episode we meet overly confident parents, each with an identity that’s easily reducible to their self-professed parenting style. Each gets a go of parenting the others’ children for a day, which we watch and judge, and then, at the end, a room full of randomers votes on who is the best. (This is also how child services operate under the Tories.)

Make no mistake, in asking us to judge these parents we are, in effect, being invited to judge children, though it was probably thought that Judging Children, the Little S**ts was too stark a title for Channel 4. That said, something with that title will certainly soon be airing on Channel 5.

Spoiler alert: they all seem to be reasonably good and kind people. Like many things that exercise the chattering classes, parenting controversies are all about the vanity of minor difference. The Lazy Parents aren’t that lazy, just more hands-off than some. The Gender-Neutral Parent is just someone who allows her son to act according to his own tastes rather than gender stereotypes. And the Eastern-Influenced Parents just prefer a more regimented life for their children than others. Although the father in this case is a life who wears a sports jacket with a T-shirt and sporadically engages in spiritually elevating martial-arts exercises like a poundshop Steven Seagal. So, while his children may be well cared for and loved, they will eventually die of embarrassment.

Most of the children seem happy enough with their lot right now. There are no comically bad parents who give them fireworks to play with or let them join Young Fine Gael or mislay a child and can’t return it. And none of them cram the children into a disease-infested car for a long drive because they feel their eyesight is failing.

In fact, despite the slightly hyperbolic title, in the interview sections the parents actually have some interesting and polite observations and discussions, carefully moderated by Anita Rani. And the clips featuring the kids interacting with different parenting styles are actually quite sweet.

All in all, my favourite bit about all this is the judgy studio audience. They sit there with unreadable studio-audience expressions but are clearly thinking, This child is rubbish, and, Those parents are a disgrace, and, You people are monsters. They eventually vote that the Eastern-Influenced Parents are the best of the three, possibly because they like the films of Steven Seagal.

As someone without children myself, I love to judge all parents, because I know how amazing I would be at parenting. My imagined child, “Patrick Freyne? jnr”, would be an extremely relaxed prodigy who is very respectful of his wise father and quantifiably better than your stupid children.

The standards for parenting are different on Springwatch, which makes a welcome return this week to BBC Two. Overall, Springwatch is a powerfully life-affirming show in which, this year, the presenters endeavour to enrich us with beautiful footage while socially distancing in different parts of the UK.

I actually felt quite emotional, as Chris Packham acknowledged people’s difficulties in lockdown and talked about the solace that can be found in nature. The show focused on the small things – the birds and plants we can see around our houses, a woodpecker that brings Packham visible joy, an avenue of trees, or “light factories”, as Packham rather sweetly calls them.

We also see beavers making dams, awe-inspiring footage of the aurora borealis off the Orkney coast and plentiful wildfowl along the majestic Thames (my favourite are the confidently hyperbolic great crested grebes, far superior to mediocre crested glebes). And then there’s a moving prerecorded bit near the end where Michaela Strachan interviews the pain-suffering wheelchair user Mark Mason Gardner about the focused joy he gets from watching foxes in his garden.

Of course, nature is also reliably horrible, and we get to see birds who wouldn’t last five minutes on Britain’s Best Parent? with or without the question mark. A tree-creeper feeds its young with a beakful of spiders (Spider-Feeding Parent). A blue tit allows several of her chicks to starve, then flings the bodies from the nest (Classic Irish Mammy). Some heron chicks beat the crap out of each other, and we’re informed they occasionally commit cannibalism (Meath people). All in all, any parents reading this who aren’t reckoning with spider diets and siblicide, you’re doing just fine. Not every child can be Patrick Freyne? jnr, the little imaginary dote.

Rebecca Ferguson: ‘Here I was, legs wrapped around Tom Cruise’