They should have called it Dylan McDermott’s Sex Garage 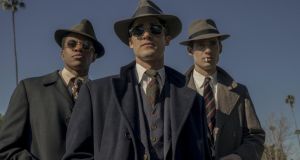 Some of the Hollywood cast, from left, Jeremy Pope as Archie Coleman, Darren Criss as Raymond Ainsley, and David Corenswet as Jack Castello.

Netflix’s Hollywood is being pitched in some quarters as being perfect for fans of La La Land and Glee. But be warned: instead of musical numbers Ryan Murphy’s new extravaganza features a lot of vigorous riding. Yes, there’s a lot of riding in Hollywood and there are a lot of rigid hunks on display who put the “wood” into that title.

The first episode barely skims the surface of the 1940s entertainment industry which the show purports to explore, choosing instead to follow that episode’s star Jack (David Corenswet) from dejected wannabe actor and struggling newlywed to employee at a gleaming petrol station run by the wonderfully oddball Dylan McDermott.

Once there, Jack discovers that he is expected to pump not only gas, but also the bored wives of studio executives. This is surprising to him despite the fact that Dylan McDermott’s character recruited him in a smoky bar after telling him in detail about his own penis. They were innocent times, I guess.

“Why, this is nothing more than a sex garage!” Jack says on his first day at work. Okay, he doesn’t say this, but I wish he had. The whole first episode largely deals with the ins and outs (ooh err!) of Dylan McDermott’s sex garage. For a brief and brilliant moment, I think Ryan Murphy, the king of subversive, arch television, has Trojan-horsed a story about petroleum-based rumpy pumpy into a drama about 1940s Hollywood in order to fool the execs at Netflix. It’s about time.

I’ve been anticipating such a show ever since Billy Joel’s outing as a petrol-pumping gigolo in the video for Up Town Girl. I also think that Dylan McDermott’s Sex Garage is a much better title than Hollywood, which is a bit grandiose yet generic.

Now, I don’t think we’re meant to take all this seriously as Mike Leigh-style realism. There’s a big sign on the wall of Dylan McDermott’s sex garage saying, “lubrication service”. The uniforms are gleaming white and suspiciously unstained by the standards of a normal garage, never mind a sex one. And Cole Porter is waiting to be serviced in a fancy caravan out back.

Frankly, I’m also fascinated by the economics that render expensive car-related services less profitable than sex work (though the employees of the sex garage must do both). I genuinely want to see the accounts! I’m sure there’ll be a whole episode on the accounts in season two.

As the first episode progresses, our hero realises that he doesn’t mind “servicing” the older ladies but isn’t too interested in male clients (see: Cole Porter in a sex caravan) so he inexplicably dresses up as a policeman and arrests our second hero, Archie, an African-American scriptwriter turned gigolo, who he somehow recruits to his cause of servicing Cole Porter in a caravan.

This extra-judicial subterfuge endears Jack to Archie, which makes no sense, but I decide to just go with it. It turns out that despite the economic constraints that have forced these men into sex work, they quite like their jobs. Dylan McDermott should be proud to have the Happiest Little Sex Garage in Hollywood (another possible title).

I know I’m dwelling a lot on the first episode. Things pivot after that and it gets a bit confusing. The sex garage is pushed into the background as new characters are added – a spirited half-Filipino director, Raymond; an African-American actress, Camille; a disappointed producer’s wife, Avis (the fantastic Patti LuPone); and we get a counterfactual piece of wish-fulfilment about a bunch of marginalised outsiders who band together to create an anachronistically progressive movie . . . with occasional subsidies from the sex garage.

The problem is that being knowing and counterfactual about things viewers don’t necessarily know about – George Cukor’s secret sex parties, closeted movie stars, Hollywood scandal sheets, the real-life struggles of actors of colour – undermines the latent narrative power of those things. I keep wishing someone had made a more straightforward drama about this history before Murphy put everything in wry quotation marks.

While it’s often powerful to see history being rewritten in favour of people victimised by it, it also casts a weird retrospective judgment on people who were not, in real life, given the agency to alter their fates and were forced into the margins or the closet. So, I don’t think telling this story is more powerful than sticking to the real stories of Anna May Wong, Rock Hudson or Hattie McDaniel (Queen Latifah) or even Hudson’s malevolent agent, Henry Wilson. It’s not like those have been overtold and Murphy already has form documenting old Hollywood (in Feud: Bette and Joan).

The second problem is a tonal one. Murphy and his co-creators can’t quite decide if they’re going for ironically ersatz or schmaltzily sincere. The jaunty jazz soundtrack, the gleamingly clean costumes, the square-jawed leading men and the shenanigans down at the sex garage (delightful!) don’t mix particularly well with the intervals in which the characters face gut-wrenching discrimination and active abuse.

The third problem is that everyone also engages in the kind of impassioned self-aware, speechifying beloved of contemporary Americans, but which feels unlikely in the mouths of the greatest generation. It’s also usually redundant.

A touching scene in which a kind-hearted producer (the excellent Joe Mantello) is tempted to abuse his power with a young star and is then overcome by the unbearable contradictions of his own closeted existence, is followed by a long speech in which he explains that he is a kind-hearted producer who was tempted to abuse his power but was overcome by the unbearable contradictions of his closeted existence. Yeah, there are lots of moments when the writers seemed to have confused the screenwriting mantra “show don’t tell” with the producer’s shibboleth, “Show then tell because the viewers are morons. Seriously, knock them over the head with it, the dummies. Look at them out there, watching Netflix, the dumb dummies.”

Anyway, this is a long way of saying: they should have stuck with Dylan McDermott’s Sex Garage. That was a show I could get behind (if you know what I mean, wink, wink, nudge nudge).