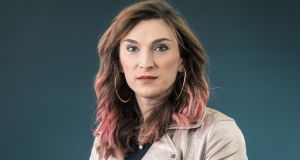 Juno Dawson: Wonderland is a tale of privilege and pain from the bestselling UK author.

In the theatre, E Lockhart tells us, “your audience doesn’t expect things to look real. Like, you can’t have a real car on the stage, anyway, can you? So instead, you make something obviously artificial. You just create the feeling. And maybe the thing you make, instead of looking real, feels true. Maybe truer than real”.

Lockhart, best known for her 2014 psychological thriller We Were Liars but also a prolific author with a 20-year publishing career and a PhD in literature, plays with genres once more with Again Again (Hot Key Books, £7.99), a follow-up of sorts to her 2009 boarding-school tale The Disreputable History of Frankie Landau-Banks. The same prestigious school serves as backdrop for both texts, but also both utilise an omniscient 19th-century-style narrator that serves as a refreshing break from the standard close third- or first-person expected from modern YA texts. In Frankie, this allowed Lockhart to weave theories of imprisonment and observation (Michel Foucault on Jeremy Bentham’s proposed “panopticon”) into the narrative; in Again Again she addresses the concept of the multiverse, with protagonist Adelaide living several different versions of the same summer romance.

The intertextual references, another hallmark of a Lockhart novel, remind us not to worry so much about which timeline is “real” – slipped in neatly as Adelaide works on an overdue set design project, or visits a nearby art gallery – but what is “true”. At times the cleverness threatens to overwhelm the emotional impact of the novel, but ultimately it impacts on both heart and head.

Dive down the rabbit hole with Juno Dawson’s Wonderland (Quercus, £7.99), another tale of privilege and pain from the bestselling UK author. The troubled but yearning Alice is drawn into an underground high-society party while on a quest for her friend Bunny, and the hype is mighty. “The Romans would blush at this bacchanal,” the hostess declares.

Curiously (and bravely), despite Alice’s various diagnoses and medications, the “madness” of the event comes not from an uncertainty around reality but the sociopaths involved, including one who remarks, “in your world, murder is punished. In ours, it’s merely uncouth”. The hyper-reality sits uneasily next to the occasional (if well-intended) preachiness of the narrative; they don’t quite balance each other out. The best approach is, perhaps, to (see above) focus on what is “true” over what is “real”.

When it was revealed that Suzanne Collins’s prequel to her blockbuster Hunger Games trilogy, The Ballad of Songbirds and Snakes (Scholastic, £18.99), was an origin story for that world’s villain, sinister President Snow, the disapproval from online YA fandom seemed thunderous. Not for literary reasons – the fear that such a book would diminish a fascinating character (see: Hannibal Lecter) – but for political ones. Such a title could only ever be an apologia for fascist dictators, the more hyperbolic arguments went; immediate condemnation was needed. (One might wonder who needs dystopian fiction at all, these days.)

Fortunately, the moral guardians haven’t prevented the novel from hitting the top of the bestseller lists; unfortunately, the teenage Coriolanus Snow fails to engage as a protagonist. It’s not that we know he ends up a bad guy, though – it’s that he already is one at the novel’s beginning. Although his family have fallen on hard times during the war, his entitlement and ambition remain untarnished; he’s already contemplating presidency of Panem in the first chapter.

Assigned to mentor Lucy Gray, District 12’s female tribute in this year’s Hunger Games, he first contemplates how best to “exploit” her, how to manage the “optics”. Despite an increasing fondness for this proto-Katniss, his feelings never genuinely threaten his worldview, in which it is always “preferable to have the upper hand, to be the victor rather than the defeated." That readers know how his story ends doesn’t help.

This diminished suspense makes the novel’s thematic concerns with human nature – bluntly telegraphed by characters posing questions such as "What sort of social contract is required for survival?" – less relevant than they might feel otherwise.

The best bits of the book lurk in the margins: snippets about the recent war and its attendant horrors, insights into the development of “mutts” (genetically modified, weaponized animals), folk songs from our world, the origin of the Games. It’s frustrating not to have more of this, but there’s certainly enough to make it worthwhile for fans eager to revisit Panem.

Finally, step into another world of spies and secrets with Helen Corcoran’s debut novel, Queen of Coin and Whispers (O’Brien Press, €12.99). Lia has long been frustrated with her uncle’s mismanagement of the kingdom of Edar, and as his heir has spent years imagining how she might do things differently. Becoming queen turns her into “a wolf in [her] own right”, all too aware that there will be scheming and plotting ahead. Among her new appointments is Xania, her spymaster, who has her own reasons for wanting to know more about what goes on behind the scenes at the court.

Alongside the swirl of political intrigue, an attraction blossoms between the two girls, despite the power imbalance. “Sometimes she watched me like I was a puzzle she couldn’t solve. Sometimes she held my gaze longer than our conversation warranted. Once or twice she opened her mouth, as if to admit something, but never did.” It’s a skilfully-done romance, and Corcoran takes advantage of the fantasy setting to present a world where same-sex relationships carry no taboos. This is a book for everyone (the complexity will satisfy adult readers, too) but I think it will find a particular place in the hearts of young LGBTQ readers for being a love story that involves obstacles other than coming-out, and ends (spoilers!) hopefully ever after.