Chief Justice Frank Clarke: ‘Judges are not immune from the human condition’

He did not discuss the Séamus Woulfe issue, in an interview at the Ireland’s Edge festival 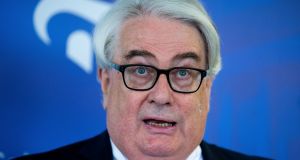 Chief Justice Frank Clarke, presented a human face of the senior judiciary in Ireland, in a rare interview conducted in Kerry on Tuesday evening. It came at the end of a fractious year, during which the Supreme Court found itself mired in scandal and conflict.

The Chief Justice was in conversation with Dr David Kenny, assistant professor of law at Trinity College Law School, at Ireland’s Edge, a two-day live-streamed event at the Skellig Hotel in Dingle, Co Kerry. The series of events is bringing academics, musicians, artists, authors, scientists, politicians and others, to west Kerry as part of the Other Voices festival, which went ahead this year online, with no in-person audience.

On the day the Cabinet approved plans to give members of the judiciary a pay increase in line with other pay rises in the public sector, Mr Justice Clarke, who did not address the Séamus Woulfe controversy, said: “Judges have pressures like people. They may have financial pressures from time to time, personal issues, they may be sick … we are not immune from the human condition.”

The Chief Justice was involved in an unprecedented crisis this year following the “Golfgate” controversy. Following a report by former chief justice Susan Denham, concerning the attendance of Supreme Court judge Woulfe at the Oireachtas Golf Society dinner in Clifden, Co Galway, Chief Justice Clarke wrote to Mr Justice Woulfe. In the letter, the Chief Justice said it was his opinion that Mr Justice Woulfe should resign, and that Mr Justice Woulfe’s attendance of the golf dinner in the midst of Covid-19 restrictions, and the subsequent fallout, had caused “very significant and irreparable damage” to the Supreme Court.

The ensuing standoff, during which correspondence between the two judges was made public, created a constitutional crisis, with impeachment of Justice Woulfe floated as a potential outcome – although that did not transpire.

Chief Justice Clarke cited the importance of judges having interests outside of the law, saying it was “important for people’s heads that they have other things that interest them, keep them human, keep them occupied.”

As for his own interests outside the courts, the Chief Justice spoke about his fandom of the band Cream – “the high point of western civilisation as far as I’m concerned” – and mentioned that he travelled with another Supreme Court judge to London in 2005 along with his son, Ben, to see the re-formed band play the Royal Albert Hall.

Asked what associations he would like the public to have with the Supreme Court, he said, “I would like them to think that it’s humans doing the best they can… I’d like people perhaps to believe that we are trying to /[apply the law/] the best that we can and doing a reasonable job of it.”

The Ireland’s Edge event also featured a conversation on the future of education, with Sen Lynn Ruane, Prof John O’Halloran, and folklorist Billy Mag Fhloinn, an interview with the Grammy-winning American musician Rhiannon Giddens, and a discussion about trans-humanism with author Mark O’Connell, and theatre-maker Bush Moukarzel.

Other Voices continues its run of live music events with a Christmas concert at the Guinness Storehouse in Dublin on December 16th, broadcast live online.