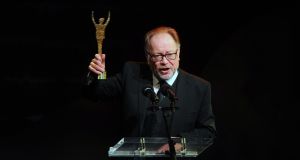 The 2020 Irish Times Irish Theatre Awards are to be deferred due to the impact of Covid-19 on the theatre sector.

The awards, the nominations for which are usually announced in early January, celebrate achievement and excellence across a range of theatre disciplines, including acting, writing, directing, lighting and design.

Irish theatres closed in mid-March and there was no resumption of live performances except for a brief period in early autumn. They were required to close again under Level 5 restrictions in October and remain shut under current regulations.

In the circumstances, the award judges and The Irish Times agreed that it would not be possible or appropriate to mount a full-scale awards ceremony for 2020.

It is planned to recognise the work which has been produced by Irish artists in difficult circumstances later in 2021.

In the interim, the current judging panel for the awards will remain in place, and will consider eligible theatrical work produced from November 2020 onwards which has been livestreamed or recorded and then broadcast to an online audience.

This change in the eligibility criteria will last until live theatre becomes generally practicable again. Companies producing such work are invited to submit it for consideration.