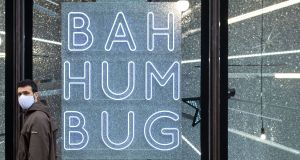 Coronavirus and its effects are behind this year's most popular Christmas cracker jokes in the UK. Photograph: Dominic Lipinski/PA Wire

Moments of light relief have been hard to come by this year, but the annual ranking of topical British Christmas-cracker jokes provides some, with the top spot taken by one that has a punchline featuring a Chris Rea song and Boris Johnson’s former adviser Dominic Cummings.

The TV channel Gold’s eighth annual ranking, which is chosen by a panel chaired by the comedy critic Bruce Dessau, was put to 2,000 UK voters, who chose “What is Dominic Cummings’s favourite Christmas song? Driving Home for Christmas” as the best cracker joke this year.

Other entries riff on more Covid-related themes, with punchlines ranging from quips about pirates and the R number to festive groaners about reindeer and herd immunity.

2 Did you hear that production was down at Santa’s workshop? Many of his workers have had to elf isolate!

3 Why didn’t Mary and Joseph make it to Bethlehem? All Virgin flights were cancelled.

4 Why are Santa’s reindeer allowed to travel on Christmas Eve? They have herd immunity.

5 Why did the pirates have to go into lockdown? Because the “Arrrr!” rate had risen.

7 Why couldn’t Mary and Joseph join their work conference call? Because there was no Zoom at the inn.

8 Why can’t Boris Johnson make his Christmas cake until the last minute? He doesn’t know how many tiers it should have.

9 What do the Trumps do for Christmas dinner? They put on a super spread.

10 Which Christmas film was 30 years ahead of its time? Home Alone. – Guardian