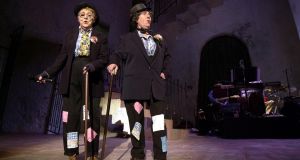 The National Campaign for the Arts said it was ‘extremely disappointed’ by the decision not to allow theatres and arts centres open. File Photograph: Eric Luke

Advanced discussions are under way at a high level in Government about the possible re-opening of theatres.

Senior health officials and representatives of the theatrical community are involved in the talks but there is currently no timeline for a re-opening date as the State.

Sources close to Minister for Arts and Culture Catherine Martin pointed to a “complex environment for indoor live performances”.

Critics of the decision to keep theatres closed have claimed they are being discriminated against because cinemas have re-opened and described the decision as inconsistent and illogical.

Theatre groups were angered at comments earlier this week by the chief medical officer Dr Tony Holohan that the National Public Health Emergency Team had not given consideration “to distinguishing between the risk that applies” in theatres in comparison with cinemas, which are being allowed to open.

But those with knowledge of the talks say “it’s not just as simple as a collective audience in a cinema. We’re talking about live events involving artists and a stage” and issues around movement.

The National Campaign for the Arts said it was “extremely disappointed” by the decision not to allow theatres and arts centres open, calling on the Government to initiate a pilot project with a view to reopening them fully in January.

The theatre community points to London where venues can play to 50 per cent of their regular capacity or to 1,000 people, whichever is the lower.

The discussions with health officials and led by Ms Martin also include a number of groups including Theatre Forum which represents theatre, dance, street arts, circus and opera production companies.

A spokesman for the Minister said “unfortunately, it was not possible at this time to allow for live entertainment including live theatre performances to return other than in very limited circumstances outdoors”.

The spokesman said Ms Martin is “very keen to see theatres reopen their doors and is holding ongoing discussions to progress this.

“The Minister recognises that the Arts and Culture Recovery Taskforce that was set up by her recently recommended that the treatment of venues and cultural venues under the different levels of the Resilience and Recovery 2020- 2021 Plan for Living With Covid-19 be reviewed.

“The disappointment of theatre practitioners who have shown diligence and responsibility in their approach to the challenges posed by Covid-19 is completely understandable,” he said.

“We all want to see the return of live performance as soon as possible and the department will continue to work with the Arts Council, Theatre Forum and other stakeholders towards that objective.”