Eddie Izzard to use the pronouns ‘she’ and ‘her’ 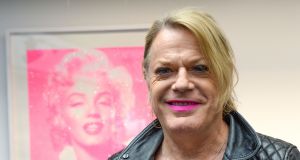 Eddie Izzard: the comedian made the announcement during an appearance on Sky Arts’ Portrait Artist of the Year. Photograph: Nicky J Sims/Getty

Eddie Izzard has adopted the pronouns “she” and “her”, saying she wants “to be based in girl mode from now on”.

The actor and comedian made the announcement during an appearance on the Sky Arts series Portrait Artist of the Year in which she described herself as gender-fluid, prompting the British LGBT charity Stonewall to praise her for her bravery.

Izzard said it was the first time she had asked to be referred to with exclusively she/her pronouns while making a television programme and “it feels great”, adding: “One life, live it well.”

Izzard, who is 58, has previously spoken about her gender-fluid identity and having modes. Earlier in her career she identified as a transvestite, saying she felt like “a complete boy plus half a girl” and referring to herself as “a lesbian trapped in a man’s body”.

In 2017, she told the Hollywood Reporter: “I am essentially transgender. I have boy mode and girl mode. I do feel I have boy genetics and girl genetics.”

Izzard has been known for decades for her fashion and style on stage and television, to which she has said: “They’re not women’s clothes. They’re my clothes. I bought them.”

Stonewall said on Monday that Izzard’s openness would have an impact on transgender communities across the globe. Robbie de Santos, associate director of communications and campaigns at the charity, said told: “We’re delighted that Eddie has been able to bravely share her truth with the world. Being open about using different pronouns is often incredibly difficult, especially in the public eye – her courageous decision will mean a lot to trans and gender-fluid communities around the world.”

The comedian Shappi Khorsandi also praised Izzard, tweeting on Sunday: “I see Eddie Izzard is trending. I can’t tell you what she means to me as a comic. Rocked my comedy world when I was a teen and beyond. Changed everything, made room. I love her and this morning I’m very happy for her.” – Guardian