Several new plays were due on the country’s big stages, a rare sight 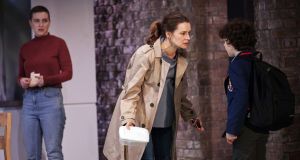 When the curtain came down on Our New Girl, did it come down on innovative programming along with it? Photograph: Ros Kavanagh

One billion years ago, before the advent of TikTok musicals and streamed monologues on YouTube, plays were staged in buildings called theatres. It’s difficult to imagine now but viewers sat side by side, with little space between them, in the presence of actors giving live performances. Like other odd rituals of yesteryear, such as fertility dances and human sacrifices, live plays no longer exist in this moment in time.

As we hang tight in another lockdown, who remembers what was happening before all this? Was live theatre getting interesting before the pandemic? Oh, yes.

If you were in Dublin last March, perhaps you were one of the last people to see Our New Girl at the Gate Theatre, a riveting play set in a strange London house and following a self-doubting mother battling through the gaslighting tactics of her scheming husband and nanny. Never mind its sophistication as a psychological thriller meets sexism satire, Our New Goirl was a play that a short time ago you wouldn’t expect to get produced.

Not a lot has been said about the game-changing season of 2019, when the two full-time production houses, the Gate and the Abbey, made a rare commitment to putting several new plays on their big stages. Deduct the number of co-productions with independent companies and the figures were still impressive.

The Abbey Theatre did the same maths. Instead of reserving new plays for the smaller Peacock stage as usual, the main auditorium was home to three new plays: Dylan Coburn Gray’s spoken-word family saga Citysong; the suburban middle-class satire This Beautiful Village by Lisa Tierney-Keogh; and Dermot Bolger’s stevedore drama Last Orders at the Dockside.

“So what?” I hear you ask. If you’re someone who prefers to wait for the next revival of a Martin McDonagh or Shakespeare play, or to see an adaptation of a book such as The Great Gatsby or Asking for It, that’s perfectly fine. Those projects don’t carry the same risk. It’s an old rule of thumb that putting on a classic play breaks even and taking a chance on a new play costs an arm and a leg. Yet if relying on old plays becomes the norm, it risks making writing for big amplifying stages a closed shop. Worse for you and me, we lose out on seeing what new talents can do with the resources of large theatres at their disposal.

To figure out the last time there was such a cornucopia is to go back some years. One could say 2009, the last time the Abbey Theatre put as many new plays on its big stage. If looking for a period when the Gate Theatre also played ball, you’re talking about 2002. That was the chock-full year of political dramas Hinterland and Ariel; the Neil LaBute romance-thriller The Shape of Things; the drawing room drama  That Was Then; Frank McGuinness’s Gates of Gold; Brian Friel’s Afterplay; and comedies Lovers at Versailles and See You Next Tuesday.

That this momentum didn’t continue might say something of the managements of the day, as a fear of new writing and a presumption of poor performance at the box office seemed to take hold. Not every swing will be a hit. When the Abbey sent out ticket deals for Elaine Murphy’s comedy Shush for much-needed publicity and released reduced €10 tickets for Richard Dormer’s gangster play Drum Belly before opening night, in the same season when King Lear and Major Barbara soared, one could think the writing was on the wall.

What has changed has been the imaginative solutions brought to the feasibility of new plays. After the stylish family drama Tribes struggled to fill houses over six weeks, the Gate Theatre attempted something different. It programmed The Children to run for just more than three weeks, expecting its audience to come and go in that time. The strategy worked like a dream and the run sold out. The Abbey Theatre used a similar production model, giving its new plays the benefit of runs ranging between two and four weeks, helping to secure their commercial success.

Change doesn’t happen overnight and artistic directors can plan programmes long in advance. It’s unlikely the encouraging results of the 2019 season were fully reflected in those early announcements for 2020. Our New Girl was one play that seemed to ride that wave of creativity while also making money. If you booked tickets online halfway through its run, you saw it was on course to sell out its final weekend.

The question is: what will happen when live theatre returns? During a recession a firm hand tends to be kept on the purse. The turn of the last decade saw revivals of old favourites by Noel Coward and Bernard Shaw. The blue-chip stock of Seán O’Casey’s Dublin Trilogy became the subject of a performance rights struggle.

Will it be commercial safe bets from here on out? When the curtain came down on Our New Girl, did it come down on innovative programming along with it?

The show must go on, either way.