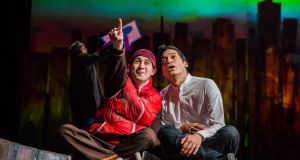 In the book, which has now been adapted for the stage, young boys in 1970s Afghanistan fly bright, elegant kites which have been weaponised for attack

There is a brutal beauty described in Khaled Hosseini’s 2003 novel The Kite Runner. In the book, young boys in 1970s Afghanistan fly bright, elegant kites which have been weaponised for attack. To those who thought of kite flying as either strutting or serene, the phenomenon of “kite fighting” will come as a surprise, their handsome shapes arcing through the air and slicing through other kites with glass-edged strings, or “tars”, to dominate and possess their prey.

Hosseini, an Afghan who escaped to the US before the Soviet invasion in his boyhood, was moved to write the book when the Taliban banned kite flying in Afghanistan. That was a cruelly repressive act, and Matthew Spangler’s stage adaptation of the book makes it seem all the more targeted, as though kite fighting was a metaphor that dare not speak its name.

On stage, the young Amir (Raj Ghatak) is a motherless, effete Pashtun boy whose affluent father disapproves of his preference for poetry and storytelling over football. “Don’t all fathers harbour a secret desire to kill their sons?”, Amir asks. (No, they don’t, replies every psychotherapist in the audience). Fate, however, has given him a besotted boyservant, Hassan (Jo Ben Ayed), a marginalised Hazara, whose first word was “Amir”, and who readily submits to anything Amir asks of him, including running obediently through Kabul to retrieve his fallen kite.

When, on such an errand, Hassan is raped by the local bully (Saroosh Lavasini), Amir can only watch secretly, horrified and transfixed. So ashamed of himself that he repudiates his friend and inveigles to have him banished from their home. Amir can never forget Hassan, wondering even on his wedding day in San Francisco whose eyes Hassan is looking into.

Breathless peaks of the third act

Years later, he journeys to Kabul to rescue Hassan’s child from that same rapist bully, now psychopathic Taliban murderer, with the aim of becoming father to Hassan’s child.

You don’t need to read too hard against the grain to appreciate the glimmer of subtext. Seeped in shame, desire and eternal debt, The Kite Runner does for kite flying what Brokeback Mountain did for shepherding.

There is a becoming bright naivety in the production’s stagecraft too, narrated by Ghatak’s Amir as he slips into broad emulations of boyhood, or – under Giles Croft’s less than subtle direction – sticks out his chest, throws back his arms and pronounces his dreadful shame to the audience in a fixed spotlight. Afghanistan is conveyed with similar restraint, in exotic tones and imagery, with an onstage tabla player upon an Afghan rug, illustrations such as a pomegranate tree projected across huge fanned kite wings, or the drone of singing bowls sounding at significant intervals. America is evoked via Barney George’s set with the curve of a skateboard ramp and a jagged backdrop rising into the shape of the San Francisco skyline.

That accentuates the more breathless peaks of the third act, a tortuous melodrama of revelations, cruel disasters and fated deliverance, at which, to borrow from Wilde, you would need a heart of stone not to laugh. But that will depend on your submission to storytelling – the more overt and winding theme of the novel and the play – with its combination of surface pleasures and smuggled meanings. The kite is pretty enough, but the lacerating edge in its tail is much more fascinating.

Ghosts: Dolly Alderton’s debut novel haunts, but not in a good way
6