What’s it like to be in a boy band? ‘Trunks off and hold these water pistols in front of your bits’

Ben Adams, head heartthrob in 1990s pop act A1, is now starring in ‘Flashdance’. He looks back on the madness of his pop-idol career 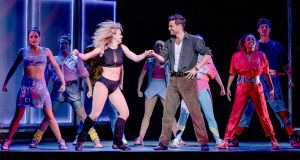 Ben Adams and Joanne Clifton in Flashdance: “When I was told the leading man was Ben from A1 I first said, ‘couldn’t you get him from Westlife?’” says Clifton

In the wave of projects that have made the leap from screen to stage – among them Titanic, Legally Blonde and Dirty Dancing – one 1980s blockbuster was positively begging to be reborn as a musical. And while Flashdance is less gritty than its celluloid counterpart, the end result doesn’t disappoint. It’s an ebullient two hours of pop anthems from the Giorgio Moroder-produced soundtrack (including Gloria, Maniac, I Love Rock’n’Roll and What A Feeling), and some high-energy choreography to boot – and that iconic moment where Alex is drenched in water.

Today, the production is in Nottingham and the mood is relaxed and buoyant. The show has found its sea legs and reviews thus far are positive, making note of the chemistry between Alex (Strictly Come Dancing favourite Joanne Clifton) and her lover Nick (former A1 boy-bander Ben Adams).

“I don’t know if it’s something that’s been created – we just got along straight away,” shrugs Clifton. “When I was told the leading man was Ben from A1 I first said, ‘couldn’t you get him from Westlife?’” .

The former ballroom dancer is the effervescent yin to Adams’s polite yet slightly more guarded yang.

“I’ve often been asked to do musicals and I’ve often said no because I didn’t think it was something I wanted to do,” says Adams. “I didn’t actually want to be on stage doing the same thing every night that wasn’t my own work.

And yet here we are. “It came around at a time when I was about to put on Eugenius [his own musical] in London that I had six months [free],” he continues. “I had spent six months in the studio working for other people. I figured it would be good to learn how it works on the other side. I’m on a tour now, and it’s fine, I’ve brought my studio with me so I’m writing and producing songs for other people during the day.”

Squint hard enough through the mists of time, and you may recall Adams as a baby-faced, curtain-fringed poppet from A1, late-’90s contemporaries of Westlife, Boyzone and the Backstreet Boys. Adams, who joined the band at 16 and promptly became head heartthob, was also the recipient of Smash Hits’ Most Fanciable Male award in 2001. It was a lively crossroads in pop’s history; a time when the boy bands and their slick, confected sound reigned supreme. Yet the tail-end of the 20th century was also a particularly interesting time to be a cog of the music industry; everyone was still very much enjoying the party, albeit trying to ignore the death rattle starting as a tickly cough at the back of its throat.

“You could still sell records back then!” he enthuses. “We used to sell 10 million records. A single would be close to a million sales, and now to get to Number 1, it’s less than 20,000 [sales].”

Yet life on the wall of every teenager’s bedroom, Adams reflects, isn’t as great as it sounds. For a start he was “stuck with that sodding haircut” for years.

“It was strange because all my friends were still at school and I’d just finished my GCSE,” he recalls. “I’d been living at home and suddenly I was out into the big wide world. The music industry was fantastic and a great pace to be, but it’s really ruthless, and a lot of weird stuff goes on. There are things that you have to do and times where you just don’t get any sleep. I definitely wasn’t prepared for what it actually was. We were literally just working all the time in a little bubble. We weren’t in any place for any length of time. From flight to flight, hotel to hotel. Nothing felt real.”

What does he mean by “a lot of weird stuff”?

“Oh god, there were too many,” he sighs. “On our very first photoshoot, when I was 16, it was in a gay club called Sailors, and we went downstairs and there were these little sex dungeons. We were supposed to be in this jacuzzi and I remember there was a used condom on the radiator. Then someone was like, ‘Take your trunks off, you’re going to hold these water pistols in front of your bits’. I was like, ‘I’m 16, this is definitely okay for me not to do this.’”

Still, Adams is aware that for most teenage girls, the boy band is the halfway house between My Little Pony and their first boyfriend.

“We had kids that were so desperate to see us that they were actually self-harming outside the hotel to try to get attention so we’d go down,” Adams wrote for a Vice magazine article in 2016.

“Screaming girls just wanted a piece of you – literally. Instead of just trying to ask for an autograph, they’d be trying to rip pieces of our clothes or our hair or anything like that, just so that they could take a piece of us away with them.”

And, as with many other boy bands, the label decreed that girlfriends were verboten, adopting the logic that an “unavailable” popstar would affect record sales for the worse.

“I did have girlfriends, but it always had to be secret, and you weren’t allowed hold hands and all that stuff,” Adams recalls. “It was all contracts and stuff.

“It was all very micromanaged. We even had security take us to the toilet.

In one particularly tragic incident, four fans were killed at a record-signing event in Jakarta, at which 20,000 fans showed up. Two youngsters were crushed against a glass wall, and, in a stampede to chase the band to their bus, two others were trampled on an escalator. The band received extensive counselling and took a temporary hiatus, but it’s something that’s rarely far from mind for Adams.

I realised that while I’d had a really good time, I hadn’t actually achieved anything. That’s why I reinvented myself as a songwriter and producer

“It was terrible,” he admits. “We were removed quickly from the situation, and we only heard about it afterwards. In fact, we went straight on to do a TV show not knowing that any of it happened. It’s a strange thing to come to terms with, though it’s obviously much worse for the families of the people involved.

“Playing arenas after that break, I’d sit there and look at all the people and think, ‘F***ing hell, anything could happen’,” he reflected in Vice magazine.

At 22, Adams “retired” from the band, citing exhaustion, and travelled extensively with pals for the four years after that, doing next to nothing.

“After that, I realised that while I’d had a really good time, I hadn’t actually achieved anything,” he says. “That’s why I reinvented myself as a songwriter and producer [for artists such as Alexandra Burke and Sam Bailey].”

While the adulation for boy bands is much the same as it’s ever been, there’s a new facet to the experience, thanks to social media, unprecedented access and a fanbase with little concept of boundaries. How does he reckon A1 would have fared in the current climate in a way that, say, successors like One Direction have had to?

“I’m not sure I’d like it to be that intrusive, but the thing is, One Direction won’t be around soon – there will be another band coming through and One Direction will be doing interviews like this and talking in retrospect,” he notes.

Still, Adams’s onetime fans, who now turn up at Flashdance shows with their children (and, occasionally, grandchildren) appear to be pleasantly surprised that he is able to sing as well as act.

“A lot of the time in musical theatre, not naming any names, people are just booked for their names, not because they’re necessarily right for the roles or [are] good actors or good singers. You see that the whole way through,” says Adams. “It’s nice that in our reviews, people are surprised, saying, ‘they’re not just hired because of what they’ve done before – they’re hired because they’re actually good at their job.’”

Flashdance is at the Bord Gáis Energy Theatre, Dublin from June 11-16. Tickets are available from €21. See bordgaisenergytheatre.ie for details.

Isabella Rossellini – model, actor, and farmer – somehow also finds a lot of time to talk about sex
8 Pouring oil on the Olympic fire
9

‘The Art of War’: As relevant now as when it was written
10 What de Buitlear saw
Real news has value SUBSCRIBE