No Smoke Without Fire: This week’s theatre highlights 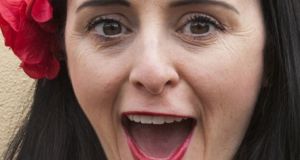 If ever there was an actor you wanted to see more of, it’s probably Mary Murray. On stage she has always had a magnetic focus, a presence somewhere between no-nonsense control and a shiver of vulnerability. It’s that quality that made her the calming centre of Love/Hate and why, in some ways, her character’s murder was the death of the show.

This solo piece by Paddy Murray, written for his daughter, is set outside a pub in the earliest days of the 2004 Irish smoking ban, and thus Mary plays six characters left out in the cold, ruminating on the spoils of a post office robbery and who among their peers is implicated. An elderly woman who does not need to be taught to suck lemons? A rough customer, whose sons are in prison for the crime? A simpering pregnant woman, a Liverpool vamp, a D4 refugee or a Chinese lounge girl? The pleasure of this lightly salted comedy is to see Murray slip so effortlessly between clearly distinguished characters – even if imitating ethnicity seems like a bridge too far – but the performance pushes marginalised characters centre stage: is it any wonder they light up at the chance?

Inspired by the wilder extremes of animal behaviour, SR Plant’s much-admired comedy from 2004 explores one man’s struggle to reconcile his scientific vocation with his more primitive desires. Mahone (Michael James Ford), the last in a line of eccentric taxidermists of Russian descent, is battling to save his dying business. Lately, there has been little detectable movement in the trade of stuffing animals and now his only commission, preserving the corpse of a much-loved pet badger, has gone disastrously wrong. Moreover, he is beset by a series of emotional and philosophical crises while haunted by the demons of his philandering past. But, spurred on by his irrepressible apprentice Ernest Blades (Ruairí Heading), Mahone sets out to overcome the paralysing effects of what the play calls Buridan’s Ass Syndrome and to find redemption through physical passion. Like the badger, you can understand why this comic double act and director Iseult Golden’s production should be remounted.