Derren Brown Underground: A wizard who will get inside your head

Review: The greatest illusion in this masterful show is the appearance of free will 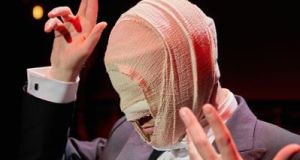 Derren Brown: your mind is not your own

Derren Brown turns his attentions back towards a man standing uncomfortably at the rear of the Olympia Theatre whom he’s been having some difficulty reading. There are a number of reasons for this. Partly it’s because the man is limited to yes or no answers to a series of very general questions. Partly because his own question to Brown has been sealed earlier inside an envelope, labelled with his initials, and placed in a jar. And partly because Brown’s face is currently obscured by so much bandage he looks like the Invisible Man.

Eventually, it comes to Brown in a rush, like a bursting dam. “You’ve got this weirdly long nipple hair and your girlfriend calls it Kevin.” The guy nods, happily mortified, but Brown has already moved on through a blizzard of revelations, zipping through the audience, whose announcements, gasps and mirth begin to feel like a musical crescendo.

This act, inspired by a popular 1930s illusion, is called The Oracle and there are many logical explanations for how it works – smoke and mirrors, a complicated system of pulleys and X-ray machines, having each and every audience member investigated months in advance – but the most likely explanation is that Derren Brown is a wizard.

He’s certainly a master performer, weaving a spell though regular astonishments, but mostly through suave incantations that spill from him from the first moments. If there is a theme to the show, a compendium of his greatest hits, it is storytelling; even the most sceptical audience member will feel pleasantly woozy as he tells you everything you want to hear: there are stories to make sense of the world, stories that hold us back, stories we can change . . . now sleep!

Brown would like to keep the content of the show guarded, which, like a Marvel movie, depends on the thrill of discovery – so, no spoilers. Suffice it to say that the illusions depend on the confidence of the performance, that the velvet, mahogany and sharp tailoring on stage remind you the oldest tricks are the best, and that the political dimension of the show is to demonstrate that the greatest illusion of all is free will. “You’re happy that this is a free and fair choice,” he will say to countless volunteers, with the solid reassurance of a Russian election official, before each confounding revelation demonstrates that we have no say in the matter at all.

This ought to be immensely frustrating. Instead, it’s rather consoling: magic, like religious faith, is an intoxicant, a holiday from reason. This is why nothing thrills me more than what hypnotists call “instant induction”, the apparent snap of the fingers that puts someone into an immediate swoon. (As a new father, I badly want to learn this trick.)

To many, hypnosis looks like an awesome display of mastery over another person, to others it’s a two-bit swindle of impressionable minds. But in truth it’s an act of co-operation: brought through various priming stages, no one here is going under unless they want really to.

This, you feel, is why so many people want to have their minds hacked, to share their infidelities and weirdly long nipple hairs in a public setting with an all-powerful, all-seeing Oz. Perhaps Brown’s great gift to the audience is that he appears to think deeply about all of us, whether divining our thoughts, or concluding his show with a hilarious, massive, multimedia fillip that sends everybody home not gasping, but singing. Derren, you read my mind.