Wrongheaded: Liz Roches’ gift is to sense how dance of its essence allows the body speak for itself, articulate, nuanced and powerful. 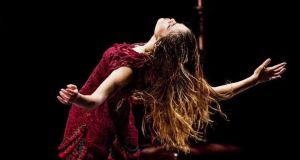 Catedral: You wanted to applaud as if it were your own skin and body tasting the air.

When the audience, as if in one surge, rose to its feet as the final ripple of Catedral’s passionate physical intensity subsided, it was more than the usual heady response to Flamenco’s strong percussive incantation, strut and fire.

Here was exquisite performance. Patricia Guerrero, choreographer and principal dancer of her ensemble, mined contradictory layers of her flamenco tradition; pure duende of Andalucian gypsy ritual, but for women especially, the weight of a Spanish Catholic past, ecclesiastical, inquisitorial and oppressively moral.

We moved with Guerrero and her three female dancers in and out of vaulted and recessed cathedral spaces, with a whiff of incense and the strains of a sung Latin mass, all strikingly evoked by Manuel Madueno’s theatrical lighting. He cast claustrophobic shadow and airy light by turn and all was matched by the equally dramatic music scored by Juan Requena for his fellow musicians and singer, in both the church and flamenco canon.

Guerrero soared as a performer. As the young woman straining in her symbolic heavy taffeta dress, her movements contracted to small and frustrated gestures while her torso shuddered, trying to shake off the layers of authoritarian church and cultural rhetoric.

But when she and her sister dancers tasted freedom, Guerreros’ own genius was not only to physically shed the layers of her dress and free up her finely attuned movement but also to add a little freeform jazz into her polished technique and rhythm. This manifested in swivelling turns, head and shoulders moving fluidly and slowly basking in the contemporary flamenco guitar riffs.

Guerrero scraped and stamped, the thrill of liberation visible in the lines of her dance. We watched exhilarated by the speed of her turns, the snapping and strutting, pure and precise. You wanted to applaud as if it were your own skin and body tasting the air.

Hard to be Soft – A Belfast Prayer
★★★★
Oona Doherty, an exciting and unorthodox voice in dance, has created an eloquent interrogation of her native city of Belfast as it too fights for air in the suffocating legacy of sectarian and class strife. In the opening image, a smell of burning incense; two dark hoodies separated by a cardinal red hat. The striking design of Ciaran Bagnall’s set and lighting leaves the Abbey stage caged within a towering barred frame, its gates shutting in and out. It could be a safe space, a prison yard, an interface line.

We experience the underbelly of young male violence haunting her city on and off stage as David Holmes’s score and the soundscape underlines the community machismo, aggression and fear, laddish sub military culture where too many young men with time and no prospects seek street corner credibility, thrill and recognition in tribal conflict.

Doherty’s duet for John Scott and Bryan Quinn underlines that endemic helplessness in the gendered sectarianism. We watch the two dancers, maybe neighbours scarred by parallel experiences of loss or tragedy, tentatively move together outside the gates. Bare-chested and exposed, the men negotiate each other with hesitant moves, grappling, embracing and punching each other in familiar male bonding moves.

For Doherty, the future is perhaps in young women, as she invested in the verve of Ajendance company’s communal dance phase in this work. Yet, it is in Doherty’s own solo that all the complexity, hope and humanity is most evident. In a neon-lit space, her white robed figure hunches in one corner like a boxer claiming territory and hedging her bets. Suddenly, swiftly she takes control, covering all the angles. Her dance teems with agility and directness, androgynous and visceral. Curled or erect, defiant or hesitant, she emanates hardness and softness, tender and human. As the light fades and the space contracts, the words of her poem/prayer rise, entreating into the night.

Wrongheaded
★★★★
A filmic image lies like a reflective pool on the stage showing two dancers moving between a projected shoreline and sea. Those dancers, Sarah Cerneaux and Justine Cooper, are also on stage dipping briefly into that magical pool, created by filmmaker Mary Wycherley. Liz Roche’s new collaborative work exploring the concept of choice, especially for women, is full of such subtle offsettings as the movement responds to the commissioned film, music from Ray Harman and Stephen Dodd’s lighting as well as the poem of Elaine Feeney.

Performance poet Feeney’s words, polemical and passionate, are spoken with urgency and intent but, while the dancers’ moves at times emulate frustration and dependence evoked in her words, they do not always mirror that hammering ferocity and pace. Sometimes Roche has her consummate dancers detach from the rhythm of the words and counterpoint it to slipslide into a quiet listening mode. Then, graceful and lyrical, their dance is supportive, bodies wrapping and folding to underscore their sense of helplessness.

Her fine duet for the two male dancers, fluently and athletically danced by Kevin Coquelard and Jake Webb, is separate and detached from those of the women as if Roche wants to underline how wrongheaded so much has become in the current debates where men need to be part of any solution. Roches’ gift is to sense how dance of its essence allows the body speak for itself, articulate, nuanced and powerful.

Leila’s Death
★★★★
As the headscarfed lamenter’s body sways to her own singing and incantation, her voice and arms rise and fall. Two contemporary musicians playing on traditional instruments, stringed and percussive, blend beautifully with Leila’s deeply sonorous tones. It is hypnotic and elegaic.

Ali Chahrour, Lebanese choreographer and dancer, has infused his contemporary exploration of a traditional Shiite funeral practice with the rituals of Leila, an official lamenter; a keener who sings the traditional Arabic ataba mourning privately the death in a family or publicly for a martyred soldier.

When the men dance, banded together in the semi military stepping of folkloric Greek and Arabic male dance, Chahrour also draws on the movement of Leila; her expressive and subtle movements, her rhythmic beating of head and chest. He creates a dance where they weave around and with each other till they pause in minutes of an affecting stillness, her head resting on his chest. With a simple swathe of a long white scarf he shrouds himself for death while the musicians and Leila become the funeral party.