Over 600, including big cross-section from theatre and arts , attend humanist service 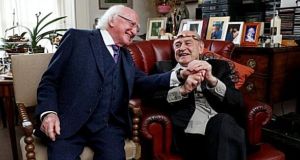 Playwright Tom Murphy was a “great vulnerable courageous being” and a “genius that we have lost”, President Michael D Higgins has said.

Addressing a celebration of his life in Dublin’s Mansion House on Saturday, Mr Higgins described how his work was “wrought from the smithy of his soul” and “ranks with world class writing on the stage”.

More than 600 people, including a large cross-section from the theatre and the arts , attended the humanist service led by Susie Kennedy for the playwright from Tuam, Co Galway, who died last Tuesday in hospital in Dublin at the age of 83.

Bearing a wreath of red roses, the writer’s coffin was borne into the Mansion House Round Room by his sons Bennan and John, nephew Brian, actor Stephen Brennan and close friends Tomas Hardiman and Paul Brennan, to the music of Mary E Walsh’s Queen of the May (italics).

Actors Frank McCusker, Sean McGinley, Stephen Brennan and Marie Mullen read excerpts from his best known work staged by Galway’s Druid Theatre and in the Abbey – The Sanctuary Lamp, Conversations on a Homecoming , The Gigli Concert and Bailegangaire.

His wife Jane spoke of a man who was “creative, excessive, ageless, daring, divine, occasionally difficult . . . but always forgiven because of his roguish charm”, while his granddaughter Molly read an extract from Carlo Rovelli’s The Order of Time (italics).

Fintan O’Toole of The Irish Times delivered the eulogy

In his address, Mr Higgins described Murphy as an “evangelist . . . for those stuck in a marginalised existence” , who tackled “what was left” of the “exhausted life of post famine Ireland” and the “hesitating new modern Ireland” with all its “self pretensions and hypocrisies”.

“But where others settled for cynicism, Tom took up his pen, and he caught it all,” he said.

Mr Higgins recalled conversations they shared about emotions involved in emigration, about the “remembered loneliness” of the leaving, and the preparations for “when it was time for a father to go away again”.

He recalled being in his company in the Unicorn restaurant when a voice asked, “Mr Murphy, when will your next play be in the Abbey?” Murphy replied: “I’m writing a play with a bicycle on stage.”

For Tom Murphy, every play was “an emptying out of emotion, exhausting, exhilarating”, and he was “regularly retiring”, Mr Higgins said.

“The image of the forge comes to my mind . . . the smithy who has to come out for air as well as to beat the reddened iron into shape”.

He was a “craftsman who saw a play as “something that has to be made” and was “never really finished”.

“Tom had the instinct to walk around his work, looking at it from the side, assessing how it was turning out” and “the valuable truth that is contained in the body of work is a genius that we have lost”, he said.

Quoting Winnie in Beckett’s Happy Days, “keep yourself nice, Winnie”, Mr Higgins said that Tom Murphy would “rise from his chair when one mentioned the word respectability”.

He had dreaded and detested the word, with all it stood for, in “conforming to the demands of a repressive system” and all its “aspirations for a grey flannel suit rather than a colourful jacket”.

He had also talked of how “the cracks appearing in the institutions that were meant to be infallible” gave him hope.

“I will miss him, we will all miss him – his humour, his presence, his courage, his generous love” and the “genius of his work”, and “the great vulnerable courageous being that was Tom Murphy”.

“Now he is flown from us, he is gone to challenge Gigli in the high notes,” Mr Higgins said.

Druid Theatre was represented by chairman Cathal Goan and Craig Flaherty. Its artistic director Garry Hynes, who staged many of Murphy’s works, is currently in the US with the theatre company.