Don’t laugh at Edward Aczel’s awkward attempts at comedy – he’s trying not to be funny. But, as his new stand-up show, ‘Is Ed Aczel Infinite?’ proves, anti-comedy can be timeless 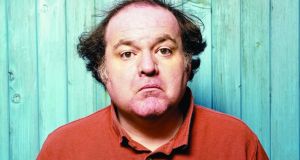 If I wait another 18 years, then the spiral-bound calendar that has spent the last 10 years on my desk will finally be correct again, the days of the week and its dates perfectly realigned.

As it is, its monthly dose of absurd banality keeps me going. This is the work of Edward Aczel, whose doughy, dishevelled figure graces each page beside a fascinatingly demotivational legend. Take the cover, a blurry image of Aczel in a supermarket aisle, beside a quote from Edith Piaf: “Life is endless, until you die.”

The most striking difference between Aczel in person and Aczel on stage is that the real man laughs freely and fully. Sometimes with a dry chuckle, often with a delighted wheeze.

“Oh, I loved doing that,” he says of the calendar. “It was such a good thing.”

His stage persona, on the other hand – one of the funniest and least conventional in an industry slick with “tight five” routines and interchangeable panel shows – is quite deliberately almost never a good thing.

Where most comedians take the stage as though propelled into a boxing-ring, ready to kill or be killed, Aczel became known for announcing himself with all the enthusiasm of a depressed railway announcer.

If he was unhappy with his intro, he would go offstage and begin again. Perhaps several times. Often he wrote material in bullet points on a large white flip-chart, or mapped the trajectory of his performance, and the goodwill of the audience, along a sluggish line graph. Other times he read topics from his hand.

In the ice-age pauses between speaking, as Zadie Smith, an early champion, wrote, “despair settled over the room.”

But failure is all part of the plan. When you do start to laugh at an Ed Aczel gig (and not everyone will) it is almost impossible to stop.

“The world demands that whatever you do, you impress people,” Aczel tells me, at home in Aylesbury, Buckinghamshire where, until relatively recently, he worked in a marketing agency. “What I’ve kind of manifestly done, throughout my adult life, was not impress people. I actually became very good at being remarkably unimpressive at whatever I did. That’s where it all came from, really.”

If Aczel finds immense humour in the mundane, his route into comedy sounds fittingly banal: he took a course.

“Nothing pushed me into it. I read an article in the paper over Christmas about Amused Moose comedy courses training people to be stand-up comedians and it seemed like fun. It was something to do.”

At the end of the course he was pushed onstage, squinting and ill at ease, to do five fumbling minutes in front of an audience.

“I was dreadful, dreadfully shambolic,” he recalls. “And people absolutely loved it. I looked at myself and said, How are people loving this? Why are people loving this? All I’m doing is standing on this stage, feeling scared, with nothing to say. And I’m getting the response that everyone else wants, but aren’t getting because they’re doing it conventionally. It took me a good few years to work out what I was doing and why it was so funny.”

That question has occupied comedy snobs for decades. The aficionados call it “anti-comedy”, a term used to contain everyone from Tommy Cooper and Andy Kaufman to Neil Hamburger and Hans Teeuwen, performers who seem preternaturally confident to deliver a shambles or alienate an audience, while breaking an alternative path to laughter.

But nearly 40 years ago the comedy writer Anne Beatts nailed the phenomenon when she described Steve Martin’s act – desperate, struggling and goofy – as “comedy about the failure of comedy”. Long before mainstream success sapped Martin’s creative energies, his stand-up performances might involve a lengthy, esoteric joke designed exclusively for a delegation of plumbers in the audience. “I said ‘socket’, not ‘sprocket’!” Martin would land his punchline with a flourish, to bemused silence. “Are those plumbers in tonight?” he’d ask.

Against the pessimism of the late 1970s, conventional comedy seemed like a spent force. Performers like Martin and Kaufman, who leaned nervelessly into onstage failure, seemed somehow more hilarious. “I’d rather if you don’t laugh, because I’m not trying to be funny right now,” Kaufman tells the audience on The David Letterman Show in 1980 in an appearance so unbearably awkward it becomes utterly hysterical. (If you’re not at work, or operating machinery, Google it.)

Something of those wised-up, pessimistic times may have returned. Failure, however, is a very hard thing to do well.

Aczel remembers bristling against the authority of conventional comedy. “There’s a stand-up comedian on the stage who is in charge,” he says. “I always tried to play it so that I clearly wasn’t in charge. Bizarrely, as you go on, you realise you have to be in charge. You have to control the crowd. That caused quite a lot of problems: how do I remain in charge of the room that I want to destroy completely?”

In his early performances, which won the attentions of Jimmy Carr’s mooted project Comedy Idol, Aczel fixed his material fairly solidly – even the pauses and stumbles were precise. “Appearances had to be deceptive,” he tells me. “It’s the old thing about comedians who are shambolic having to be the most organised. I knew where the tough parts of the show were and I knew when something would get me out of jail at different phases.”

Later on, as he grew in confidence, he began to involve the audience in his act, conscripted into eye-wateringly absurd banal banter. “It became less about writing complex kinds of set-ups and more about a group of people passing an hour and seeing what happens.”

There are some audiences who live in a complete bubble and they don’t know what to make of you: you’re a stand-up comedian and you’re meant to tell jokes

If there’s an echo of Beckett in those words – “That passed the time.” “It would have passed anyway.” – you’re not the first to notice it. One of Aczel’s shows ran under the title Ever Tried. Ever Failed. No Matter. Try Again. Fail Again. Fail Better and, in 2012, he was invited to the Happy Days Festival to share a programme celebrating Beckett with stage legend Robert Wilson, experimental theatre company Pan Pan and novelist John Banville. Beckett was the master of “anti-comedy”, but Aczel’s performance was not among his better fails.

“It was in a big room in a pub, full of local people to see stand-up comedy, and it was a very tough gig, I seem to remember.”

Indeed, Aczel has had his share. “There are some audiences who live in a complete bubble and they don’t know what to make of you: you’re a stand-up comedian and you’re meant to tell jokes. Those audiences are always the toughest. They actually really want a traditional set-up/punchline kind of guy, someone to tell a story about the . . . I don’t know . . . the gravel or something, and everyone to laugh.”

It says something about how far Aczel deviates from the norm that his go-to idea for populist humour is gravel-based comedy. (He’s kind enough to laugh when I suggest that gravel is common ground.)

Instead, Aczel’s most sustaining joke is to be a man hopelessly out of his depth, at a time when everyone is. “I’m very good at it finding subjects I have no chance of ever understanding,” he says. Previously, his shows have addressed the financial crisis or the random nature of existence – “very big, fundamental subjects which I completely fail to grasp in any detail.”

The show that marks his debut in the Republic of Ireland, for Kilkenny Cat Laughs, is called Is Edward Aczel Infinite?, for which armchair physicist Aczel ponders the speed of light and the theory of relativity on a search for meaning in the universe that would have given both Beckett and Kaufman a dark chuckle. Life, endless until you die, is a kind of existential anti-comedy; a big cosmic joke.

“The only message I’ve ever tried to peddle is that whatever way you look at it, we’re headed for the apocalypse,” Aczel says, brightening.

His time may have come.

He adopts an I-told-you-so voice. “I’ve mentioned the apocalypse in every show for the last seven years and no one has said, ‘Oh, Ed Aczel was right!’ No one!”

Is Edward Aczel infinite? The answer may surprise you. But, like that calendar, he’ll go on.

Is Ed Aczel Infinite? is on Saturday June 2nd at Cleere’s, Kilkenny, as part of Kilkenny Cat Laughs (May 31st-Jun 4th) thecatlaughs.com

Autre Monde: ‘I take great pride in adding scars to my body’
8

Patrick Freyne: Homeland is a tool for teaching Americans geography
10