‘Were we being passport Paddies or was there a level of patriotism?’ 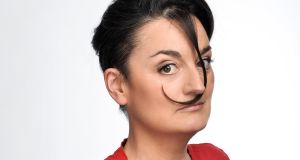 Zoe Lyons: She left Ireland aged nine and returns on occasion to attend big family get-togethers “because Ireland really is the cousinland”.

Looking back across Zoe Lyons’s 15-year comedy career, it’s peppered with key milestones that confirm her observation that “it’s been a gradual incline in the right direction”. She reached the finals of Channel 4’s So You Think You’re Funny in 2004, was an If.comedy best newcomer nominee for her first Edinburgh stand-up show in 2007, made her Mock the Week debut the year after, then appeared in Live at the Apollo in 2015: the gate-opener to mainstream comedy and an opportunity to bring in a mass audience to her sharp anecdotal style (“Come on, don’t tell me I’m the only person in this room who hasn’t looked at their other halves and thought ‘I’m probably the better one in this relationship’,” she regaled). It’s tempting to claim her success has a little to do with her Irish genes, but actually she’s a child of the whole of the British Isles.

“I was born in Wales to an Irish father and an English mother, then we moved to Ireland, then to England, then up to Scotland, then back to England,” she explains. “I’ve been everywhere, and I’ve often wondered where my roots are.”

Now happily settled in Brighton in the UK with her wife, she’ll be exploring her Irishness later this year when she broadcasts Passport Paddy, a BBC radio documentary about the rise of Brits rediscovering their heritage in light of the race to get an Irish passport.

“Like most people with an Irish parent in the UK now, I’ve very much reconnected with my Irish passport,” she says. “Post-Brexit, there was a huge influx of British people to the Irish Embassy, papers in hand. I was one of them, but then I wondered if we were just being passport Paddies, or was there a level of patriotism?

Post-Brexit, there was a huge influx of British people to the Irish Embassy, papers in hand. I was one of them

"Do we feel Irish or was it just an arranged marriage so to speak? I mean I’ve never really felt British, unless I’m queueing and then it really comes out, but I can’t listen to Irish music without getting misty-eyed. There’s an innate patriotism in me somehow so I’m looking forward to recording that this summer.”

Zoe grew up in Dunmore East, Co Waterford, with fond memories of the place.

“We overlooked the sea and it was idyllic, it was a lovely place to grow up,” she reminisces. “That was my recollection of it anyway. I spoke to my dad about it recently, and he said that it was nice but in the 1970s there was no money and absolutely nothing to do. As an adult, I think I would have died of boredom but as a kid, I was happy running around fields poking cow pats with sticks. That was my idea of entertainment.”

The family then moved to Clonmel in Co Tipperary. She attended convent school “where some nuns were nice”, she says with a laugh. “For kids, the uniform is quite intimidating. I can’t say I have fond memories of it, but I do have memories.”

After leaving Ireland aged nine, she returns to Ireland only on occasion, like big family get-togethers “because Ireland really is the cousinland. Anyone in the UK probably has at least two relatives in Ireland somewhere”. And imminently, she’ll be appearing at the Kilkenny Cat Laughs festival, after experiencing the town’s comedy takeover for the first time last year.

“The line-up is strong this year,” she notes. “I love Joanne McNally – I love her delivery, her voice and energy, I love her everything, so I’m looking forward to seeing her again. And Eleanor Tiernan’s on too, she’s one of my favourites. I work with her over here in the UK, and I think she’s brilliantly funny.”

Her route into these stellar line-ups – the likes of David O’Doherty, Aisling Bea and Reginald D Hunter are also playing – wasn’t straightforward. It was first sparked when she began acting in plays at the University of York, where she was studying psychology. Once she made the decision to become a performer, she moved to London and retrained in London’s Poor School, an excellently named drama school, after which she took jobs waitressing while going for auditions for acting roles (you might remember her in Survivor, one of the first shows in the reality TV genre). When off-duty, she hung out in free and cheap open-mic nights, and saw enough that she eventually realised she was well able to take the stage too. She signed up, and eventually moved from audience to performer, then from open-mic nights to paid gigs.

This ground-level training ensured she amassed thick skin and plenty of performing hours, which came in handy as a gay comedian standing in front of a larger, broader audience.

“The industry itself tends to be an open, accepting environment but, as far as the audiences are concerned, when I started it was enough of a challenge being a woman in the comedy world,” she says. “To be a gay woman was a double whammy; it blew some people’s minds.

The industry itself tends to be an open, accepting environment but, as far as the audiences are concerned, to be a gay woman was a double whammy

“The world is moving on now and people’s open-mindedness has changed an awful lot in the last 15 years­, but of course some people do dig their heels in and fervently refuse to evolve. I’ve been places where there’s blatant homophobia in audience members; every now and then you come across pebble-headed Neanderthals. I’ve had ‘dyke’ shouted at me onstage, or ‘bloody lesbian’, I’ve had all of that.

“At the time, it takes your breath away, but there’s some really stupid people out there and you can’t get away from that. Thankfully the large majority aren’t like that anymore – people are more accepting, and it’s become easier for people to be who they want to be onstage.”

Later this year, as well as the radio documentary, she’ll be seen on Celebrity Masterchef with the likes of Carol Decker of T’Pau and reality stars Gemma Collins and Spencer Matthews, an experience she describes as “tremendous fun” “We’ve already filmed it, it’s in the bag,” she explains. “Can’t say how it went but I thoroughly enjoyed it. It was just really stressful – until you’ve had your food critiqued by John Torode and Gregg Wallace, you’ve no idea how stressful it is.”

If it sounds like she’s branching out to the outer echelons of comedy, she certainly is. She still has half a mind to act, seems to be just as interested in society at large, and isn’t too hung up about her long-standing status as a comedian.

“I’m ambitious but, God rest his soul, the late, great Ken Dodd was working up until he was 90, and that doesn’t appeal to me at all,” she says. “I think I have a healthy attitude to work. There will be a time where I’ll do something else, like whittle sticks or something. I will not Ken Dodd this career, it will stop at some point.”

But with her fortunes currently at an all-time high, we trust it won’t be anytime soon.