The week’s best plays: Christmas with Orson Welles and stuck in the pub

A ‘radio play within a play’ production; and an annual tradition at the Lyric in Belfast 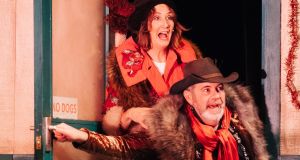 On Christmas Eve 1938, entertainment maverick Orson Welles gathered a company of actors together at the Campbell Playhouse in New York for a live recording of Charles Dickens’s A Christmas Carol. The previous year Welles had sent the US into a panic with his radio broadcast of HG Wells’s The War of the Worlds. For this seasonal special, he invited Lionel Barrymore to play Ebenezer Scrooge, a role he was already familiar with on the stage. Welles was both director and compere for the production: in the recorded transcript he introduces the story as the world’s “favourite fictional chronicle of what Christmas is, and what Christmas means to all the simple people of the Earth”, while also paying homage to the soup that sponsored the broadcasting.

AboutFace Theatre has taken Welles’s production as a starting point for its new “radio play within a play” production. Orson Welles’s Christmas Carol opens in the 10 minutes before the company goes on air, and nothing is going smoothly. Barrymore is sick, the script isn’t finished and Welles – known for his legendary tantrums – is on the rampage. Director Kathleen Warner Yeates presents Paul Nugent’s play in traditional 1930’s radio style, with live sound effects and a bit of ad-libbing. Nugent himself plays the ambitious actor-manager with the famous baritone, and Barrymore: well, will he recover in time to play the lead? And will the audience ever get to hear a faithful version of Dickens’s “immortal story”?

It has been 20 years since comedians Conor Grimes and Alan McKee wrote their first Christmas show for the Lyric Theatre. That play, Plucked and Stuffed, was a type of pantomime for adults, with an outrageous take on seasonal festivities and plenty of pertinent political jokes. These days the comic duo have both a popular TV profile (BBC’s The Visitors and Motor Mouth) and an established writing career (The History of the Troubles Accordin’ to My Da), but their Christmas show at the Lyric has become an annual tradition, showcasing both their scriptwriting nous and their performance skills. In Driving Home for Christmas they take on the lead roles of Frank and Paddy, two of the travellers marooned in the Dander Inn on Christmas Eve. The pub lays claim to being the highest in the Sperrin Mountains, but when a snowstorm strands a group of five drinkers at the pub overnight, they have neither wifi coverage nor phone reception. What are they to do, then, but talk about the meaning of Christmas? Directed by Frankie McCafferty. Actors Ruby Campbell, Gary Crossan, Rod McKee and Ali White join Grimes and McKee to make an alternative holy family that hopes to have even traditionalists rolling in the aisles with laughter.