Drama at Inish gets the ‘funny fixer’ treatment

Cal McCrystal has worked as a comedy adviser – from Paddington to One Man, Two Guvnors – and now comes to Dublin to direct Lennox Robinson’s 1933 play at the Abbey 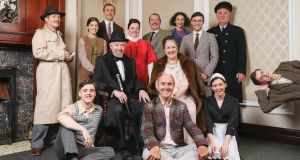 At the end of Lennox Robinson’s 1933 play, Drama at Inish, the circus comes to town. Their late arrival is not without controversy. Constance Constantia, who has spent the summer season entertaining the seaside village with “intellectual sort of plays”, declaims that “it is an insult!” She has spent the last three weeks trying to “stir something in these clods, waken them to some spark of life”and now they will be sent “to sleep again... with a circus!” The townsfolk, meanwhile, are delighted. Constantia and her actor-manager husband, Hector de la Mare, have brought nothing but the bad influence of their Ibsenite repertoire with them: babies have been conceived out of wedlock, suicides have been planned, and the government in Dublin has fallen. “Bring on the clowns,” the townsfolk whoop with relief, as the circus wagon rolls by the window, a pair of jesters leading the way. “Clowns are my joy!” hollers one.

The circus-themed ending seems particularly appropriate to the Abbey Theatre’s new production of Robinson’s classic play, which was last produced at the theatre in 2005 to shockingly bad reviews that lamented the lack of humour in Jim Nolan’s production. A way to keep the play alive in the repertoire, then, was to bring in a director known for comedy. In the Abbey’s selection of the Belfast-born, London-based director Cal McCrystal, they couldn’t have found a more suitable candidate to release the comedy in the play, which is subtitled “an exaggeration in three acts”.

McCrystal, who began his career as an actor, was responsible for some of the best British comedy to appear in the theatre in the 1990s, creating the original productions of The Mighty Boosh and Spymonkey. After working on the National Theatre’s production of One Man, Two Guvnors with James Corden, which became the fastest selling show in the history of the West End, he became known as a “funny fixer” invited to work as comedy adviser on various high-profile stage productions and films, including The Amazing Spiderman and the Paddington films. In fact, McCrystal was the face of Paddington: the human behind the ursine hero. “Bears don’t show any emotion, really,” he explains, “but there was a lot I could do with timing and silly things. Like that pleasured eye-rolling thing he does when he puts a toothbrush in his ear. An animator would not necessarily know how to draw that without an actor inventing it for them.”

McCrystal says he doesn’t “particularly remember being funny as child, but my grandmother in Belfast always used to say that when anyone would ask me what I wanted to be when I grew up, I always said I wanted to be a clown. And there is a school magazine from when I was about eight years old, and was in school in New Jersey, where we were asked that same question, and I said I wanted to be a comedian. So I guess it was isn’t just something I wandered into.” While training as an actor in Scotland, he realised he “was not terribly good at doing the serious stuff”. After completing a clown course with Phillipe Gaulier, he found his niche, and when acting dried up, he started directing, which led to a string of hits at the Edinburgh Fringe and a three-year stint with Cirque du Soleil. “I guess, I’ve never outgrown the need to make the audience laugh,” he says. “I think it’s the highest form of theatre.”

Despite McCrystal’s s high-profile international career – he has just opened a new show in Las Vegas – working at the Abbey Theatre “has always been at the top of my list”. Although his family moved away from Ireland when he was five, they came back often, and McCrystal remembers his first visit to the Abbey “the building was new then, but I remember just being totally captivated”. It was at the Lyric Theatre in Belfast, meanwhile, that he had his first experiences of Robinson’s work, a production of The Whiteheaded Boy, “which I absolutely loved, and when I was sent Drama at Inish to have a look at for this production, I immediately recognised the writing style, the quirky characters, the eccentric dialogue. When I found out it was written by the same person I knew I had to do it”.

McCrystal describes the play as “funny like a Chekhov play: a lot of the source of the laughs is laughing at people’s pain and how they are thwarted, their disappointments, their frustrations. It is about the effect that this theatre company has on this sleepy coastal town, how all these angsty plays release a lot of darkness in the town. Suddenly people are trying to murder their wives, are throwing themselves off the pier, are falling out with each other. That’s funny, but the issues underlying are very serious as well. When I started my career, I wanted the audience to be laughing from beginning to end and that was great, but after a while I started to realise that it was like offering audiences an afternoon tea, when I could be giving them a full meal, which is much more satisfying, so I played around with adding pathos. There’s that saying: ‘with every laugh a tear and with every tear a laugh’. It is amazing to watch how an audience can turn on a dime. I love that manipulation”.

I have the audience sitting on my shoulder all the way through rehearsal, and I don’t want anything more than for them to have a good time.

One of the ways in which McCrystal has worked to manipulate audiences in this production is by removing the play from its original context and setting it in the 1960s instead. The 1960s “is a lot more colourful and fun visually. The 60s was the beginning of the end for the type of theatre [represented by the de la Mares], so to have all these young people in yellow jumpers allows us to accentuate the generation gap in the play”.

Elsewhere, however, McCrystal is not sure how exactly he makes things funny. Sometimes there are specific things to do with timing. “James Corden tells this story,” he explains, “about how, when One Man, Two Guvnors was playing on Broadway, and it was the middle of the run and he had lost this big laugh. So he asked me to watch and tell him what he was doing wrong. I watched it that night and afterwards said ‘it’s because you are taking your hand off the door handle in the middle of your line. If you leave it until the end and you’ll get the laugh back’. So the next night he did what I said, and I don’t know why, but he got the laugh back.”

More crucially, however, McCrystal believes his ability to make things funny comes from the fact that “as a director, I am not trying to promote a message. I am not trying to say, look what this play is about, how relevant it is to nowadays, or anything like that. I have the audience sitting on my shoulder all the way through rehearsal, and I don’t want anything more than for them to have a good time. It is as simple as that”.

Drama at Inish runs at the Abbey Theatre until January 21st