Drama at Inish review: A fun if frictionless experience 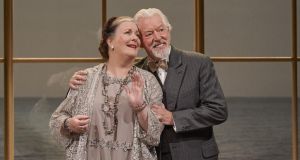 Abbey Theatre, Dublin
★★★☆☆
Theatre is a subversive force in Lennox Robinson’s 1933 comedy Drama at Inish. It steals into an unremarkable Cork coastal town, in the form of the De la Mare repertory company, takes roost in a shabby seaside hotel and immediately begins to expose secrets, whip up torment and arouse passions among the community.

“You take these plays too seriously,” complains hotel and theatre coproprietor Annie Twohig (Helen Norton) to her husband, John (Mark O’Regan), now hosting the actors. “Sure what are they, only a way of passing the evening?”

The Abbey’s new production is inclined to agree with her. Although Annie will later find herself living out an Ibsen play – her wardrobe screamingly cosmopolitan and her husband, faced with the bills, just screaming – director Cal McCrystal doesn’t hope to do anything so transformative in Robinson’s play.

From the arch self-references of a preshow announcement to Sarah Bacon’s set, the joke becomes confined to the theatre itself

Shifting the action to the 1960s and enhancing its comedy with energetic slapstick and lively visual gags, McCrystal plumps for a more recognisable, reassuring style. On the surface that seems to correspond with Robinson’s agenda: “Ah, sure, we’ve had enough of revolutions,” someone pshaws at the artistic ambitions of actor-manager Hector de la Mare (Nick Dunning). But they, like Robinson, had recently lived through one…

Here, from the arch self-references of a preshow announcement to Sarah Bacon’s set (where the wide bare-board space, raised bay window and green-velvet curtains recall nothing more forcibly than a stage), the joke becomes confined to the theatre itself. Like Dunning’s self-pitying Hector, and his marvellously affected wife and costar, Constance Constantia (the hands-down hilarious Marion O’Dwyer), that makes for an affectionate, knowing and quite hermetic treatment.

So performances begin at the level of music hall, where servants spin, guests whoosh, and Aoibhinn McGinnity’s Lizzie, a proto-Mrs Doyle tea-pusher, delivers instructions with arms firmly akimbo. As the town becomes intoxicated by the plays of Ibsen, Chekhov and Strindberg (and McGinnity swoons beautifully into her own tragedy), that energy keeps ascending, like a comic rocket trying to escape gravity.

Inevitably, this yields mixed results, where McCrystal is less inclined to extract gags from the text than to implant them through the embellishments of performance. Some additions are pure pleasure: the fetching silent comedy beyond the window, O’Dwyer’s consummate stealthy tippling and her vaudevillian relationship with a seltzer bottle. The star of the show, surprisingly, is overlapping dialogue, where contemporary muttering shakes some dust out of the dialogue.

In Tommy Harris’s charming performance as Eddie Twohig, the hoteliers’ besotted son, is the pleasing suggestion that Ibsen invented the moody adolescent

Other jokes, such as a visual gag involving attempted suicide, are shockingly funny, highlighting Robinson’s complicated flippancy about unwanted pregnancies, lost babies or romantic suicide pacts. In Tommy Harris’s charming performance as Eddie Twohig, the hoteliers’ son, besotted with Breffni Holahan’s indifferent guest, Christine, is the pleasing suggestion that Ibsen invented the moody adolescent. Is it dramatic satire, though, or wish fulfilment, that this finally makes him irresistible?

Darker interpretations aren’t encouraged by a production thronging with comedians and very short on straight roles, making for a fun but frictionless experience. (Only Helen Norton, excellent throughout, realises the subtle power of doing less.) It also dilutes Robinson’s more satirical point, replacing the provocations of the theatre company with the pacification of a circus, to end this production with a whirling, dancing curtain call. As with one marvellous moment, in which O’Dwyer’s wickedly physical performance yields laughter in successive, rising waves that she and Dunning expertly ride, maybe they just want to play.