‘It’s above you’: How the Gaiety made Aladdin’s magic carpet fly

Meet Daryn Crosbie and the colourful crew behind the Gaiety panto 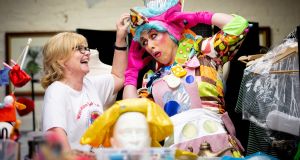 Pauline McCaul, the ‘the miracle maker’, designs and makes the panto costumes, pictured with Joe Conlan as Widow Twankey at the Gaiety Theatre. Photograph: Tom Honan

Daryn Crosbie was just a toddler when he went to the Gaiety panto for the first time. His grandmother, Thelma Ramsey, was musical director for the seasonal spectacular and he used to sit beside her in the orchestra pit as she cued the live band.

Crosbie wasn’t looking at the musicians, however. “I would sit with my back to them, watching the audience instead. It was the best seat in the house.” More than 40 years later, Crosbie is the mastermind behind the festive extravaganza. He has simultaneously served as director, writer and choreographer for the annual pantomime for the past five years, an endeavour he happily admits is a “full-time job”.

We meet just before this year’s production – Aladdin – transfers from its rehearsal studio to the theatre, where it will take up residence for the next two months, entertaining full houses of families and school groups for two shows a day. However, Crosbie has already started taking notes of ideas for next year’s panto, whose posters have already been designed; the script will be storyboarded in February, just days after this year’s panto comes down.

Contemporary pantomime is an artform that is in constant dialogue with the present moment, so it is important that Crosbie is always looking around him for inspiration.

Sitting snugly on the prompt seat in the theatre all those years ago was instrumental in firing Crosbie’s imagination and propelling him on a one-way career trajectory towards his current profession as panto king. When he was old enough, he joined the Billie Barry Stage School, whose multitalented children still play a key role in the ensemble cast, and became a “proper panto kid”. Later he graduated to the professional cast, first in the dance ensemble, then as “the arse end of the cow”. After almost a decade dancing, he started choreographing the annual show, and in 2008 took over as director.

Crosbie’s appointment as director coincided with a renewed energy and interest in the annual event from the theatre’s owner, Caroline Downey. Under her guidance, the Gaiety began to take more control of the various elements of production. Previously, the theatre had bought in scripts from UK touring companies, but Downey began to commission original scripts, from comedians Gary Cooke and Malachy McKenna among others.

Crosbie, who has written the script for the panto for the past five years, explains the rationale. “We just began to find that the set scripts had a very different sense of humour to ours, and that the storytelling narrative was different. [The British panto tradition] revolves very much around the idea of having a celebrity in a starring role – and that’s fine, there are other Irish pantos that are into that – but we like to offer something more rounded from a storytelling point of view.”

Downey applied the same creative logic to other production elements. Instead of hiring in special effects equipment (or not, due to the inability of the Victorian theatre to facilitate them), the production crew started creating their own. This year, they have spent months designing a magical flying carpet for Aladdin, which can pivot above the audience as well as above the stage, while an interactive video wall adds an immersive edge to the sets.

Costumes too, have became an inhouse affair. Pauline McCaul, known by her peers as “the miracle maker”, designs and makes the costumes with a staff of three. This year they have made almost 90 costumes, each with three or four different pieces; one, Dame Wishy Washy’s incredible washing machine dress, made from all your lost socks, must be made of hundreds of pieces.

The result of these creative changes has seen the Gaiety panto become increasingly professional in its standards.

“We see ourselves as a musical theatre show, rather than just light entertainment,” Crosbie says. Indeed, the production values it espouses are perhaps the only homegrown equivalent to the commercial model of London’s West End popular theatre.

Actor Joe Conlon has a long history with the Gaiety Theatre – this year marks his 30th performing in the Gaiety panto. He remembers “when the sets were pulled on ropes, and the lights on big wheels being rolled around, and Maureen Potter was the big name, and she had this huge electric microphone that would move up and down”. These days “it’s all wizardry, amazing”, but “we still put the same amount of effort in now as we did then”, and Conlon doesn’t mean that lightly. “There is a huge demand on you physically. Every show is the first show for someone, so you have to give it everything.” Twice a day.

Nicholas Grennell is also a Gaiety panto veteran. He did his first panto when he was 17, debuting as principal boy, playing Buttons to Anita Reeves’ Fairy Godmother. He was 37 by the time he graduated from principal boy, first to the Dame and then to “the best role of them all”– Baddie. “It was disgraceful really. I was an old man playing a young one, but that’s the power of makeup – and my performance, of course!”

For an actor who has always been interested in musical theatre, the Gaiety panto has been a really important part of allowing Grennell to showcase both his vocal and his acting skills.

“Back in the 80s and 90s, there was a good bit of work in musicals and revues. But with the 02, the 3Arena, the Bord Gáis Energy Theatre, that sort of work seemed too parochial compared to what the big touring shows could offer. What we produced was terrific, considering the resources we were working with, but it couldn’t compete.”

The increased professionalisation of the Irish pantomime industry means that there is more work for Irish actors and dancers who have trained both inside and outside of the country.

Julian Capolei is one performer to benefit from the platform that the Gaiety panto offers. The Walkinstown native, who was a member of the Irish National Youth Ballet, trained in musical theatre at the Glasgow Conservatoire before moving to London. Although this year will be the fourth time he plays Aladdin – he had a stint in the Disney West End version – it marks his Irish professional debut. “London, really, is where all the work is.”

Capolei came to the production after Crosbie failed to find an Aladdin in the Dublin auditions. It was a “brilliant coincidence” that they should find an Irish Aladdin in London, Crosbie says, “as much as we can, we try to keep an Irish flavour. It’s important: Irish families are our audience”. Princess Jasmine is an Irish-Egyptian performer, Suzie Seweify, who comes to the production from Abu Dhabi, where she grew up. Aladdin is not her first experience of the Gaiety panto, however. “It was an annual tradition for all my cousins, so if we were home for Christmas we would go too.”

Nothing, however, could have prepared either of the young actors for the audience’s investment in their performances and the story as it unfolds in front of them. “You have to match their energy, but also rein them in,” Capolei explains, “so that they listen to you, so that you can tell the story. It is really important, and it is hard to find the balance.”

“People can be very snobby about the pantomime,” Capolei says, by way of conclusion – and his fellow actors all silently agree – “but when you think about it, the relationship you have with the audience, it is probably as close to the Shakespearean experience as you will get.”

Aladdin runs at the Gaiety Theatre, Dublin, until January 19th