The Red Iron review: The All Ireland, a suicide, and a group of friends’ lacerated hearts

Jim Nolan’s play is vehemently localised to Waterford, but his achievement is that at its core it is a piece about anywhere 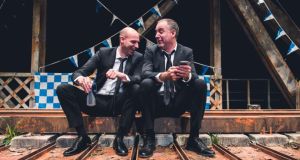 Garter Lane Arts Centre, Waterford
★★★★☆
For a play about place, Waterford obliges with an icy moon shining on the snowfields of the Comeraghs. This atmospheric coincidence seems relevant because Jim Nolan’s play The Red Iron is so vehemently localised that even the cast credits include place names like passports: Michael Quinlan (Morley Terrace), Brian Doherty (Manor Lawn), Greta Rochford (Lismore Park).

The only outcast from the memorial reunion that brings grieving friends to a redundant railway bridge is the character who got away and stayed away. Until now.

Nolan’s achievement is that at its core this is a play about anywhere. Three men and two women reminisce about the suicide of a sixth member, who seems from their thin-skinned nil-nisi-bonum tribute to have been something of a mentor, philosopher and all-round good mate in a group friendship covering 30 years.

The funeral is held the day after the 2017 All Ireland final, and the defeat of the homecoming team accentuates the complex questioning that must follow any suicide. In exhuming the suspicion of guilt, Nolan disguises the laceration of heart and soul with dialogue larded with obscenities and delivered with blistering relish by Doherty, as Dog, and Quinlan, as Scabs.

Mood and pace change when Zorro (Keith Dunphy), a pigeon fancier who buys his birds online and admits that his criminal record didn’t come easy, announces his appointment as a school’s child-safety officer. Zorro shares his toke, and memory is mollified by sentiment and Elvis Presley.

This is the music hearts break to, and the breaking follows the unheralded entry of Kell (Neil Ditt), whose appeasement provokes an eruption of tribal resentments long hidden by suburban affinities.

This is powerful material so powerfully conveyed as to ignore some gaps in the dramatic structure. Presented under the banner of the former Red Kettle Theatre Company, The Red Iron may be overly localised, but that should not consign it to insularity.