A Christmas Carol review: Only a Scrooge wouldn’t enjoy it

Selina Cartmell’s ambitious Gate production is both intimate and involving 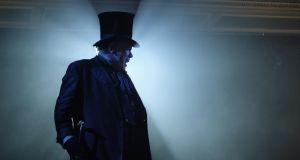 ‘As Scrooge, Owen Roe glowers and grimaces beneath a top hat’ in A Christmas Carol

Gate Theatre, Dublin
★★★★☆
If the Victorians invented the traditions of Christmas, Charles Dickens was surely the architect of its altruistic thrust. His novella, A Christmas Carol, is an ageless moral tale, whose lessons of charity and goodwill resonate throughout the generations and incarnations, from film and stage musicals to the Muppets.

Jack Thorne’s new version is a joyous affair, which matches Ebenezer Scrooge’s scrupulous stinginess with a cutting sense of humour. “God rest ye merry gentlemen, Let nothing you dismay,” a group of carollers implore. “You dismay me,” he responds, but he is surely grinning underneath his gruff demeanour. As Scrooge, Owen Roe glowers and grimaces beneath a top hat, but he is perhaps too likeable an actor to ever really be a villain.

Thorne’s characterisation of Scrooge is more subtle than that anyway. In his meanness Scrooge is traumatised by memory, and even in his final transformation, he isn’t afraid to call a humbug. When the Three Ghosts regale him with that same carol, he cannot help but quip “that is still a song I have little time for”.

The ensemble are happy to show that they are having a great time, and want the audience to join them in their high spirits

Ciaran Bagnall’s clever set reveals its secrets as the story unfolds, with inset boxes and empty tomb-shaped door frames that also call to mind the graveyard that Scrooge is threatened with. Bagnall illuminates the production with candle-lit intimacy, an effect that comes into its own during an extended flashback scene near the end of the production, where Scrooge’s life – the scenes we have just seen unfold before us – flashes before our eyes.

Staged in traverse, Selina Cartmell’s ambitious production is both intimate and involving. The ensemble, who share the narration of the tale, as well as multiple individual roles, smile generously at the audience as they ring in the play’s start with Christmas bells. They are happy to reveal that they are having a great time, and want the audience to join them in their high spirits. In a sly nod to pantomime traditions, they even enlist the audience in preparing the final feast. Musical director Cathal Synott reimagines a repertoire of traditional carols, as both rousing renditions and a subtle atmospheric soundscape that reverberates at a low level throughout.

You would need a heart harder than Scrooge’s not to join them for the finale.