The best theatre this week: From Beckett to a female-centred festival

Des Keogh and Rosaleen Linehan stage a reunion; and SoloSirens comes to Tallaght 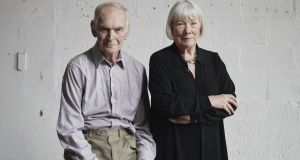 Endgame
Project Arts Centre, Dublin.Until Dec 7
“Ah the old questions, the old answers, there’s nothing like them,” a decrepit Hamm says fondly to his servant, Clov, who he has alternately cosseted and tormented, over the innumerable years they have spent together. Samuel Beckett’s 1957 play may have been a product of its post-Holocaust time, but the questions it asks about life and death are universal. What does it mean to live when a body is always dying? What does it mean to die when life goes on regardless? The apocalyptic wasteland of its setting, meanwhile, has never seemed more pertinent, as the climate crisis threatens humanity with extinction.

Gavin Quinn’s sharp new production for Pan Pan Theatre brings together old comedy collaborators Des Keogh and Rosaleen Linehan as the cranky ash-bin-bound Nagg and Nell, who provide much of the humour that undercuts the deeper existential angst. “Nothing is funnier than unhappiness,” after all. Andrew Bennett and Anthony Morris, meanwhile, are matched in the master-servant relationship, which really serves as a parable for father and son. “We’re not beginning to ... to ... mean something?” they puzzle, revealing sentiments that might well sum up the entire Beckett canon. “Ah that’s a good one!”

SoloSirens: Baggage/Falling
Civic Theatre, Tallaght.Until Dec 14
SoloSirens is a new festival at the Civic Theatre, dedicated to showcasing the work of female theatre artists, like Jenny Macdonald and Jacinta Sheerin, who are writing and performing their own plays. Sheerin is currently touring schools across the country with her show Sweet About Me, which looks at the relationship between food and anxiety in young women. Putting its money where its mouth is, the festival has been curated, directed and staffed entirely by a female team, highlighting themes of abuse and addiction, and the patriarchal structures of oppression that make themselves felt in both the private and public spheres for women of all backgrounds. Baggage by Nicole Rourke offers one perspective. A “coming-of-rage” story, it charts the journey of a middle-aged woman who leaves her settled life in rural Ireland to sashay around South America, where she discovers sensuality through dance. Baggage, performed by O’Rourke under the direction of Deirdre Molloy, has a final performance today.

The SoloSirens festival comes to a conclusion in later in December, culminating in a collaborative community theatre project that engages with women living in the communities of south Co Dublin, encouraging them to tell their stories. The resulting performance piece is Falling, an intercultural intergenerational exploration of local women’s lives, collaboratively authored by the SoloSirens Collective. You can see it at the Civic Theatre’s studio space on December 13th and 14th.

Netflix: 10 of the best new shows and films to watch in April
8