‘I don’t look online, so it doesn’t ruin my comedy’

Ahead of his appearance at the 3Arena, Australian comic Jim Jefferies talks career and family 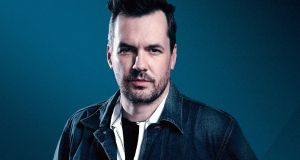 Jim Jefferies: “The only person that can cancel me is me.”

It’s 8am in Los Angeles, but already Jim Jefferies has done a school run and is settled at home ready to talk about his upcoming stand-up tour, The Night Talker.

Be assured, this level of morning activity isn’t the behaviour of an average comedian, but Jim Jefferies isn’t an average comedian. A case in point: he talks about being a single dad and the logistics of his tour with a surprising normalcy, yet – to give him the title earned at the esteemed Just for Laughs festival in Montreal in July – he’s also the Stand-up of the Year.

It’s his first major plaudit after leaving Australia aged 22 to rise to the top tier of comedians; first as a stand-up, then as creator, writer and actor of short-lived sitcom Legit. His profile rose further after an incisive routine on gun control from his 2014 TV special Bared went viral, and the momentum led to his own irreverent US late-night slot, the Jim Jefferies Show on Comedy Central.

“Winning the award was a little embarrassing because there’s so many great comics around today and when you’re in Montreal, they’re all up there at once,” he says, recalling the night.

“I was giving a speech in front of a room full of people where anyone could have won it. It’s not like an Oscar where it’s for a particular movie and it’s judged for the best performance this year, it was an arbitrary thing. I didn’t do anything special this year – I guess I could have won it last year, or next. But what an honour to have people praise me just for doing my job. I’m sure people in most occupations don’t get that privilege.”

Jefferies might not be egotistical about it, but it’s an acknowledgement of his daring comedy; only the greats poke and prod at the audience’s boundaries while generally staying on the right side of funny. He’s bold in language as well as content, he effs and blinds his way through his anecdotes and skits, but today, he explains that he’s made sure none of this language is passed on to his son, age nine (“he’s a good little fella,” he says with pride).

Jefferies doesn’t please everyone, and the word “controversial” is an adjective he’s well used to, with provoking jokes about rape, miscarriages and minorities peppered into his set.

Given Jefferies’s onstage boldness and his offstage sensitivity, I float the recent comments from The Joker director Todd Phillips in Vanity Fair, in which he blamed “woke culture” for his shift away from comedy.

“Go try to be funny nowadays with this woke culture,” Phillips said. “There were articles written about why comedies don’t work anymore – I’ll tell you why, because all the f**king funny guys are like, ‘f**k this shit, because I don’t want to offend you’. It’s hard to argue with 30 million people on Twitter… so you just go, ‘I’m out’.”

“Well I don’t look online, so it doesn’t ruin my comedy,” Jefferies says, laughing. “I’m sure there’s a lot of people who think that I should be cancelled. But the only person that can cancel me is me, I guess.”

When it comes to the comedian’s responsibility onstage, Jefferies is firm that an “act” should be seen as exactly that. “I don’t understand why we’re the ones that have to become the morality police of our society,” he says.

“You can have a movie that has gore and offensive scenes in it, but the people are actors, so there’s nothing wrong with that. Or you can have a cartoon like with Family Guy which gets away with a lot, but they’re a cartoon so that’s not a big deal. Since when are comedians 100 per cent ourselves on stage? We’re not. We’re playing exaggerated versions of ourselves, or we’re trying to evoke an emotion, whether that’s shock or laughs. It seems odd that comedians have to be more moral than politicians. It’s silly.”

'If people don’t know you’re joking, that’s when you get in trouble'

That’s the thing to accept about outrageous comedians – their comedy lies in the outrage. Look past that and you get the sense that Jefferies is actually one of the good guys. For example, there’s a YouTube video on his deep-dive into Ireland’s abortion campaign in 2018 (he’s been a frequent visitor since he lived in the UK). In this, he interviews the National Party leader and anti-choicer Justin Barrett, but insists Barrett journeys to England for it “so he has to endure the same kind of bulls**t that every Irish woman has to go through if they want an abortion”. It’s firmly in this context that he gets away with calling abortion “the ultimate Irish goodbye”.

“If people don’t know you’re joking, that’s when you get in trouble,” he says. “Comedy in the wrong hands can be very offensive. I’ve never set out to hurt anybody or any groups with my comedy. I feel like I try to tread that line right on the edge. But with that, the edge changes every year so sometimes, you’re retroactively in trouble for something you said 10 years ago. You can only be judged by today, I reckon.

“I’m not in the business of upsetting people. I try to make them laugh. All you can do is write jokes for a show that you think you’d want to see yourself. The worst type of comedy is when someone has thought about what the audience will enjoy in a calculated way. Then all of a sudden, it seems false. That’s what maybe the PC culture has done, where people are second guessing themselves. As soon as you second guess yourself, you’re going to look weak on stage.

“I’d like to say that you make missteps as well,” he adds, on a bit of a roll. “Our job as comedians is to try to be as funny as possible and to take risks, and no one wins when they gamble all the time. You fail sometimes. If you don’t want to watch a risk-taker, just go and listen to your mate in the bar tell a few jokes.

“My intention is never to fail, my intention is to be good and successful. I find it very odd that we get pulled up on our mistakes. As long as you just don’t make them over and over again, as long as you’re trying to do things right.”

If the Stand-Up of the Year award didn’t suggest his gags have a remarkable hit-rate, there’s his arena tour coming up too, which lands at the 3Arena in Dublin and offers respite from the politics of the day.

“I’m recording my new special in Boston just a couple of weeks before, which won’t air for a few months after, so that material will be well-honed,” Jefferies says. “But there’s no politics on stage in this particular show. I’ve been doing so much of that on my TV show that I don’t want to be talking about Trump or Brexit anything stupid like that in my stand-up.”

The tour takes him to the end of the year, and after that “I want to do some more acting if I could – but that’s not for me to decide, that’s up to whether anyone’s going to cast me. I’m also doing a pilot for TV channel over here, and trying to write another sitcom – but there’s so many moving parts as to whether it gets on the air or not”.

'I’d like to always have a good career and enjoy longevity, but you also have to be prepared for it going away'

Jefferies is aiming to tour and record another special next year too, but he’s giving fair warning that we’ll be seeing less of him onstage in the future, as his son hits double digits.

“I want to be more present for him now. When you get to the stage that you’ve played the big rooms and done a little bit of acting, I don’t think there’s anything that I feel I need to conquer,” he says. “I’d like to always have a good career and enjoy longevity, but you also have to be prepared for it going away. You can’t let it define you because if you let that be what you’re all about, you’ll inevitably get disappointed. So instead if it all ended tomorrow, I can say I’ve had a very good career – and a better career than I expected. How could you be sad about that?”

The Yellow House: A dual heritage of belonging and dispossession
9