Divine Madness review: Where the voice starts dancing and the body starts singing 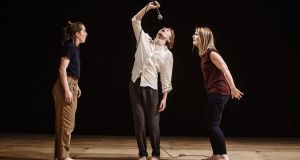 Space Upstairs, Project Arts Centre, Dublin
★★★★☆
For many years the choreographer John Scott had a parallel career as a classical tenor, but these dance and music strands rarely came together. Two recent choreographies revealed a new engagement in music, as he toyed with musical structure in works by Bach and Monteverdi, but Divine Madness is a full-throated and full-bodied exploration of the physicality of the operatic soprano. At its heart is the credo of the American performer Meredith Monk – an artistic touchstone for Scott – who said that she works “in between the cracks, where the voice starts dancing, where the body starts singing”.

The soprano Mairéad Buicke and the dancers Conor Thomas Doherty, Magdalena Hylak and Hannah Rogerson are equals onstage: similarly dressed, Buicke moves and the dancers vocalise. But the interconnectedness between the body and voice is most sharply revealed in the moments of separation when dancers simply mimic Buicke’s movements as she sings Dvorak’s Song to the Moon or when their physical freneticism reaches melodramatic pitch in response to overenunciated Italian. Dancers and singers are trained to appear effortless and conceal technique, but here it is conspicuous, along with the hidden physicality of singing and use of breath in dance.

Scott also reveals the emotional world of operatic drama, particularly the role of the soprano: a heroic, suffering character who elicits pity as she deals with love, death, grief or loss. This emotional loneliness is sharpest in the quieter moments, such as when the three dancers lie still on ground during Puccini’s O Mio Babbino Caro. It is also aided by Eric Würtz’s design, with a stripped-back stage replacing operatic opulence and restrained lighting foregrounding general atmosphere over individual spotlight.

Rather than seeking a fat-lady-sings dramatic climax, the work begins to wind down during Verdi’s Ave Maria, and by the time the pianist Richard McGrath plays the introduction to Richard Strauss’s Morgen all four performers have been spinning – some gently, others turbulently – with their arms floating up to the side. Any operatic rhetoric is finally dissipated by the gentle ending, in silence and fading light.