Circus 1903, complete with life-sized elephant puppets, is an extravaganza that will resonate with all ages 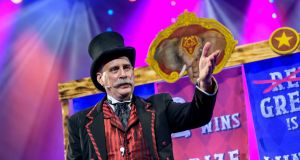 It’s a Saturday afternoon and the Birmingham Hippodrome is a hive of activity. The theatre is celebrating its 120th birthday and locals are dropping in to mark the milestone. In the foyer, they are greeted by jugglers and street walkers while children take part in circus skills workshops inside.

The day’s festivities are a nod to the theatre’s origins as a circus. Fittingly, it also happens to coincide with the arrival of Circus 1903, a circus extravaganza currently touring the UK and Ireland. It comes to the Bord Gáis Energy Theatre next week.

The show is a recreation of a turn-of-the-century circus albeit with some innovative twists. Instead of taking place inside a big top, it takes place on a theatre stage. Instead of including live animals, it stars two life-sized elephant puppets. It’s good old-fashioned fun that seems destined to resonate with a generation of children raised on The Greatest Showman.

Backstage at the Hippodrome, the cast of Circus 1903 are busy getting ready for that day’s matinée performance. Chief among them is David Williamson, who plays Ringmaster William Whipsnade. Originally from Ohio, Williamson is a magician by trade. He was touring with The Illusionists, a magic show, when he was approached by one of the producers about assuming the role of ringmaster.

“The producer said, ‘You’d make a good ringmaster. You’re tall and you’re loud,’” recalls Williamson. “So they selected me for this role and I absolutely love it.”

As Ringmaster Willy Whipsnade, Williamson dons a top hat, old-school ringmaster garb and a fake moustache before serving as the show’s master of ceremonies. He flings cartons of popcorn at the audiences and interacts with children on the stage. For the duration of the show, he has the audience eating out of the palm of his hand.

Backstage, a travelling band of Irish journalists are similarly enraptured when he mentions that he is no stranger to these shores. “I love it there because my son plays traditional Irish music,” he explains.

His son was introduced to the music after hearing a snippet of The Dropkick Murphys on The Departed. From there, he discovered the music of Planxty and learned to play the accordion and bouzouki. Since then, Williamson has come to Ireland and become personally acquainted with the likes of Andy Irvine and Sean Ryan.

“My son and I have visited several times and we go to pubs,” he says. “He plays the session in the corner and I do magic with the Irish magicians in the other corner.”

Ringmaster Willy Whipsnade isn’t the only star of the show. In fact, Circus 1903 features a diverse cast of performers. One such performer is Senayet Asefa Amare, a contortionist from Ethiopia. Billed as The Elastic Dislocationist, she started training to be a contortionist as a 12 year old in circus school (yes, it exists). Her ability to quite literally bend over backwards makes Olympian gymnast Simone Biles look unimpressive.

Then there is Mikhail Sozonov, a rola-bola specialist. During the show, he balances on wooden boards placed precariously atop cylindrical objects. On paper, that might sound like a fairly run-of-the-mill circus trick. It was only when Sozonov took it upon himself to teach this journalist how to do the rola-bola that it became clear just how difficult it is. Mikhail, if you are reading this, I would just like to thank you for letting me cling on to you for dear life.

Where many of these artists would fade into the background of another circus production, they are each given their moment in the spotlight here.

“Rather than make it ethereal and blending it and so forth, we go, ‘And now watch this guy, this amazing juggler,’” explains David Williamson.

“People who do juggling are amazing. They’ve worked for their entire lives since childhood. Let’s not just put them in a silly costume and put them in the background. Let’s put a big beautiful spotlight, a beautiful frame around them, wonderful music, a grand over-the-top introduction and watch this person for five minutes. That’s what this show does. It celebrates each circus artist.”

The two other undisputed stars of the show are Queenie and Peanut, the aforementioned elephant puppets developed by the people behind War Horse. Queenie is modelled on the largest African elephant ever recorded and has three puppeteers inside her, operating her head and legs.

Peanut, meanwhile, is a baby elephant. Puppeteer Mikey Brett is inside Peanut on his own while two other handlers manipulate Peanut’s trunk and make him blink. All this helps ensure that “the audience really feels like [the elephants] are a living, breathing part of the world”.

As circuses have moved away from using live animals in their shows, the use of puppets seems like a no-brainer.

“In the theatre world, we have been using puppets instead of animals for a long time,” says Brett. “You look at things like The Lion King, War Horse or Life of Pi, which has just started in Sheffield and is going to the West End. In theatre, it’s a really common thing so there’s absolutely no reason why it shouldn’t happen in circus as well.”

“What is nice about this show is the way the elephants are portrayed and the way they are interacted with,” he says. “They look like they are friends and they look like they’re being really well looked after. There is no sense that they are there just to do tricks. They are valued and loved members of the family just like every other act.”

In an era of dwindling attention spans and superhero movies, it’s a miracle that something as quaint and traditional as the circus has continued to thrive and win over new generations. From Williamson’s vantage point, that’s part of the beauty of the circus.

“When we opened in Sydney at the Sydney Opera House, I looked through the curtains and there was a family in front,” he recalls. “The children, the parents, and the grandparents. And that just filled my heart. Because you know these days everyone is on their separate screens in different parts of the house being entertained by different things. Nobody’s on the same page.

“On top of that, the boys were literally jaw-dropped. They had never seen anything like this. No Marvel movie will compete with an actual human being flying through the air in front of you at those heights in the theatre with the music and the mist and the costumes. It’s irresistible, isn’t it?”